Different species of damselflies and dragonflies emerge throughout the warmer months of the year.  Entomologists lump them all into three categories  —  “spring,” “summer” and “fall” fliers.  Fall fliers generally emerge in mid-summer and fly through early to mid-October.  Recently, at a nearby pond, it appeared that damselflies were taking advantage of the lingering warm days by mating and laying eggs before cold weather set in.  Nearly every cattail leaf was loaded with several pairs of damselflies, most of which were still attached to one another (the males continue to grasp the females after mating with them to prevent the removal of their sperm by other males).  When I returned the next day, there wasn’t a damselfly in sight.

Chipmunks are known for their personal hygiene.  If you take the time to sit and observe them, you will find that much of their grooming takes place after eating, when they’ve been holding a seed or nut in their front feet .  They often sit up on their haunches and proceed to lick the insides of both front paws, after which they typically rub their face, presumably to clean whiskers or perhaps facial hairs that might have gotten a bit of food on them.  Chipmunks also take dust baths, during which they saturate their fur with sand and then shake it out, in an attempt to rid themselves of the mites and fleas that are known to plague them.

If you look at enough Trembling  Aspen (Populus tremuloides) leaves (and to some degree, those of other poplar species), you are bound to come across some that have an oval swelling about the size of a pea where the leaf  and stem, or petiole, meet.  This swelling is a gall – an abnormal plant growth caused by chemicals coming from the moth (Ectoedemia populella) that laid an egg at this spot this past summer, or from the chewing of the hatched larva as it bored its way into the stem of the leaf.  This gall provides shelter and food for the developing larva, which will, after the leaf falls, go down into the ground to pupate.  An adult moth will emerge next  spring. 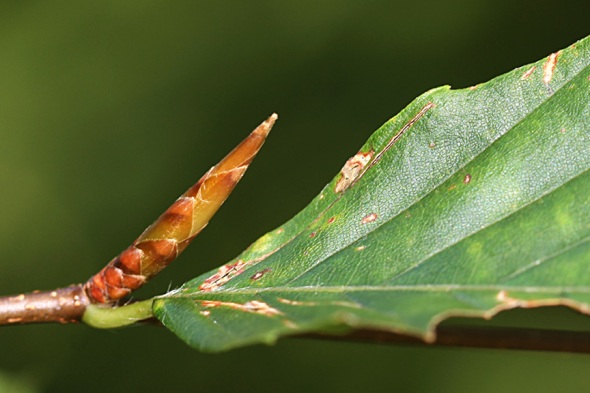 Because tree buds tend to swell and increase greatly in size in the spring, this is often the season when we first notice them and assume that this is when trees produce them.  If you look in the axils of leaves on any tree right now, you will see full-size buds that were formed this summer.   These little packages of miniature leaves, branches and sometimes flowers, will remain on trees all winter, tightly closed and often protected from the elements by modified leaves called bud scales.  Come spring, when trees are once again taking up quantities of water, their buds will swell, scales will fall off (leaving bud scale scars), and tiny, pristine leaves will appear.  (Photo is of American beech, Fagus grandifolia, bud.)