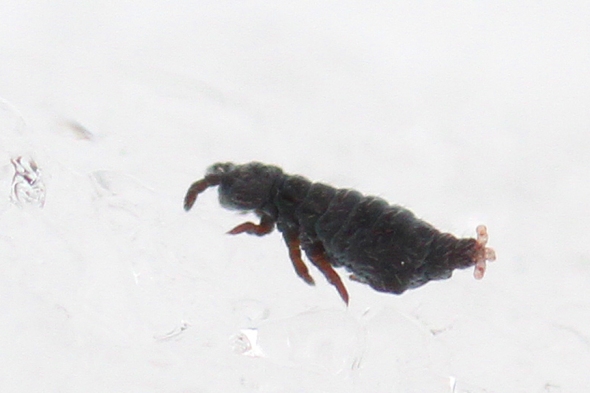 Snow fleas, a species of springtail, are neither fleas nor insects (though, like insects, they are arthropods). During most of the year they live in the soil and leaf litter, consuming fungi and decaying vegetation.  On warm winter days they appear on the surface of the snow, and are often described as “pepper on snow” due to their black color and tiny size (1 – 2 millimeters long).  Although they lack wings, they have two tail-like spring projections, or furcula, which are held like a spring against the bottom of the abdomen by a kind of latch.  When the snow flea wants to move, the furcula springs downward, catapulting the snowflea as far as 100 times its body length.  I observed something recently which I have neither heard nor read about, and that is a four-pronged pinkish appendage which emerges from the tip of the snowflea’s abdomen just before it flings itself to another spot.  At all other times, this structure is withdrawn into the abdomen and is not visible.  Photographing this structure during the split second it is extended was quite the challenge, and I would love to hear from anyone who might know its function.  NEWS FLASH –  mystery solved by Charley Eiseman, author of TRACKS & SIGN OF INSECTS: Those three (not four) structures are anal sacs.  According to Frans Janssens,  “just before hopping in the air, three sticky vesicles are everted from the anus: they serve as a kind of sticky safety bag that prevents the specimen [from] bouncing around when it lands after the jump.”  ONE LAST UPDATE:  from Dr. Ken Christiansen, Professor Emeritus of Grinnel College, AKA Dr. Snowflea, who reports that these anal sacs are only found on species within the Hypogastrura genus, and that their function is unknown.

This entry was posted on March 9, 2012 by Mary Holland. It was filed under Arthropods, March and was tagged with Arthropods, Collembola, Furcula, Snow Flea, Springtails.