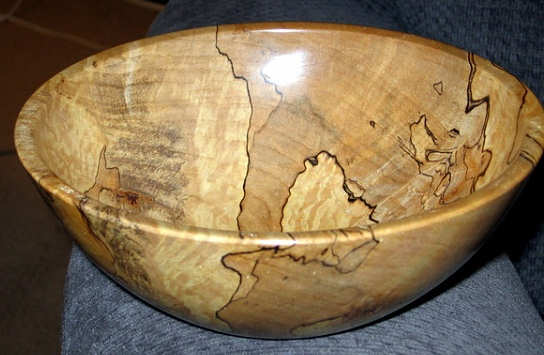 As an impressive number of people knew, the black markings on the yellow birch were caused by fungi that create what is called “spalting” in trees. When the temperature (70 – 90 degrees F.) and moisture content (30%) of certain trees (birch, beech and maple, most commonly) is just right, colonies of fungi infect them. There are different forms of spalting – the pictured fine black lines are referred to as “zone lines.” They are created when incompatible colonies of fungi come into contact with each other and lay down barriers to separate their territories. The presence of spalting indicates that the decay process has begun. Spalted wood’s natural beauty is highly regarded by wood turners and is held in contempt by the lumber industry (with time, the wood softens and weakens as it decomposes). As the Ohio Dept. of Natural Resources so eloquently states, “Spalted wood embodies all that is curious in the natural world. It is formed by unseen organisms at a specific time and place that only it knows.” (Thanks to John Gutowski for yesterday’s yellow birch mystery photo and the HobbitHouse for the bowl photograph.)

This entry was posted on December 18, 2012 by Mary Holland. It was filed under December, Fungus, Non-flowering plants and was tagged with Spalting, zone lines.