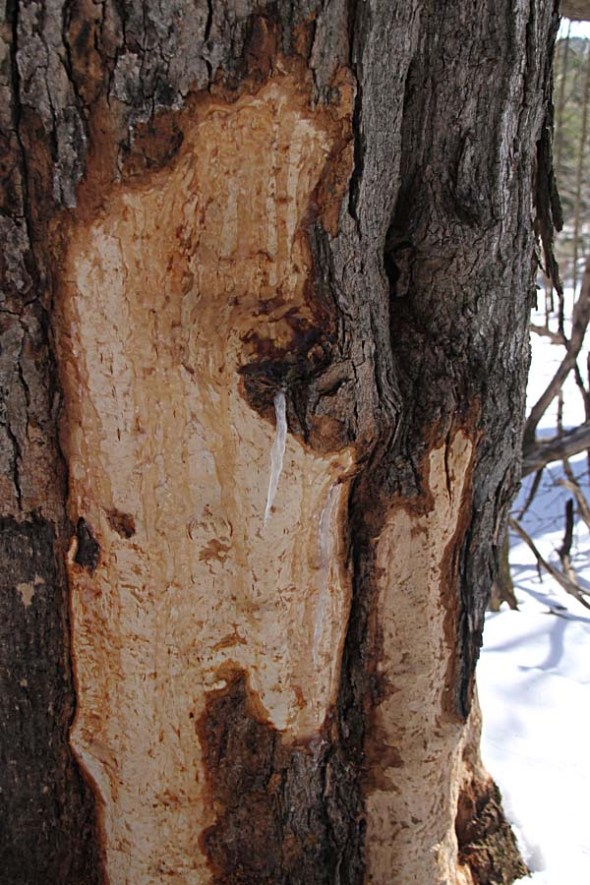 At least one porcupine got a jump on humans this sugaring season. A porcupine eats outer tree bark in order to access the phloem (layer of inner bark cells that transport nutrients) and cambium (produces phloem and xylem cells) layers of a tree, its primary winter diet. In eating these layers, the porcupine unintentionally cuts into the xylem, or sapwood, where water and dissolved minerals (sap) are transported between the roots and crown of the tree. Unintentionally, porcupines tap the trees whose phloem and cambium they eat. In this case, the weather had warmed up enough to cause pressure in the tree, which in turn caused the sugar maple’s sap to flow just as a hungry porcupine happened along. Soon thereafter, the temperature dropped, causing the sap to freeze, forming icicles. While they looked good enough to sample, one whiff of them told me that sap was not their sole ingredient! (They were located beneath the porcupine’s den in a hollow tree, from which urine flows freely.)

This entry was posted on February 21, 2013 by Mary Holland. It was filed under Animal Diets, Animal Signs, Bark, February, Herbivores, Mammals, Nocturnal Animals, Porcupines, Rodents, Trees and was tagged with Erethizon dorsatum.