Much is happening below ground at this time of year, including the birthing of red fox pups. In late March or early April, about 7 weeks after mating, female foxes give birth to four to ten young. Each pup weighs about a quarter of a pound, and the white tip of its tail is often already evident. During the first month, the pups grow a dark grey coat (they shed this coat and grow a sandy-colored coat about the time they venture out of their den, which is usually dug in a sandy bank). The mother stays with her young in the den, nursing and curling her body around them to help keep them warm for about two weeks, while the father brings her food. She then resumes her normal activity, returning to the den to nurse, clean and play with her pups. 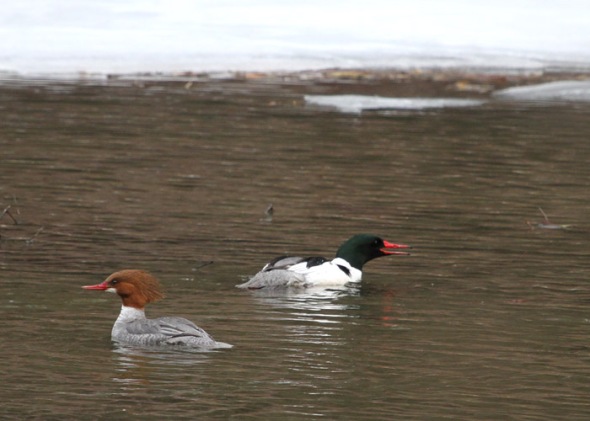 Common mergansers can be seen year round in northern New England, but in the spring their numbers peak around the first week in April, due to the large number of birds that wintered further south and are migrating to Canadian nesting grounds. These birds are fish eaters, known to consume at least 50 species which they easily grasp with their bill due to the sharp projections along its edges. Egg-laying is still a couple of months away, but coveted tree cavities where they nest are being scoped out. (female common merganser on left, male on right) 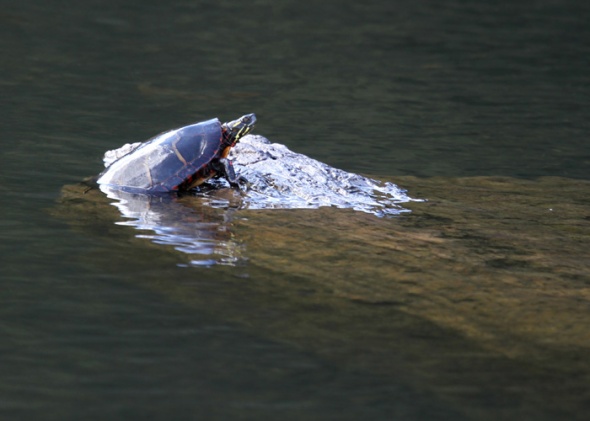 Hibernation has come to an end for painted turtles in central Vermont, or at least for the early risers. Painted turtles actually became active a while ago, beneath the ice before ponds were completely thawed. Once some of the ice melts, they are quick to climb up and bask in the sun on any available floating log or rock, or even on the melting edge of the ice. Having spent the winter in the mud at the bottom of the pond at the rather brisk temperature of 39 degrees F. (at 39 degrees F. water achieves its greatest density and sinks to the bottom of ponds, which is where the turtles are), painted turtles are more than ready to get warm. Like black bears, painted turtles find March and April the most challenging months of the year. More of them die now than at any other time, due primarily to a shortage of food.

It’s well known that owls have an acute sense of hearing — some species, such as the barn owl, hunt nocturnally by sound alone. An owl’s asymmetrically-placed ears are located beneath the feathers at the edge of its facial discs. This placement, along with the shape of the external ear canals, is thought to contribute to an owl’s keen ability to locate sound. The flesh-colored fold of skin that you see in front of this barred owl’s ear is movable, and reflects and concentrates sound waves coming from behind the bird.

The most prominent courtship behavior of male wild turkeys (toms) consists of two displays: gobbling and strutting. Both begin in late February in northern New England, before the females (hens) are receptive, but by late March the males begin to reap the fruits of their labor. The gobbling of the males attracts females or competing males over considerable distances. The tom turkey begins to “strut” only after a hen appears. While strutting, he fans his tail, lowers his wings with the primaries dragging on the ground/snow, elevates the feathers on his back and throws his head backward as he appears to glide around a female. If she is receptive, she assumes a “sexual crouch” on the ground, signaling to the male that he may mount her. (Thanks to Chiho Kaneko for this photograph.)

The round “ball” that is often present on the stem of goldenrod plants contains the overwintering larva of a fly (Eurosta solidaginis). A year ago an adult female fly laid an egg in the stem of the goldenrod plant. The egg hatched and the larva proceeded to eat the interior of the stem. As it did so, the larva excreted chemicals which caused the plant to grow abnormally, creating a ball-shaped “gall.” If you were to open a goldenrod ball gall today, you would probably find an overwintering larva (if a downy woodpecker or parasitic wasp hadn’t gotten there before you). Within the next few weeks the larva will pupate, and as early as April the adult fly will emerge from the gall, having crawled out the passageway that it chewed last fall. An inflatable “balloon” on its forehead allows the fly to burst through the remaining outermost layer of tissue at the end of the passageway. The adult fly lives about two weeks, just long enough to mate and begin the process all over again. 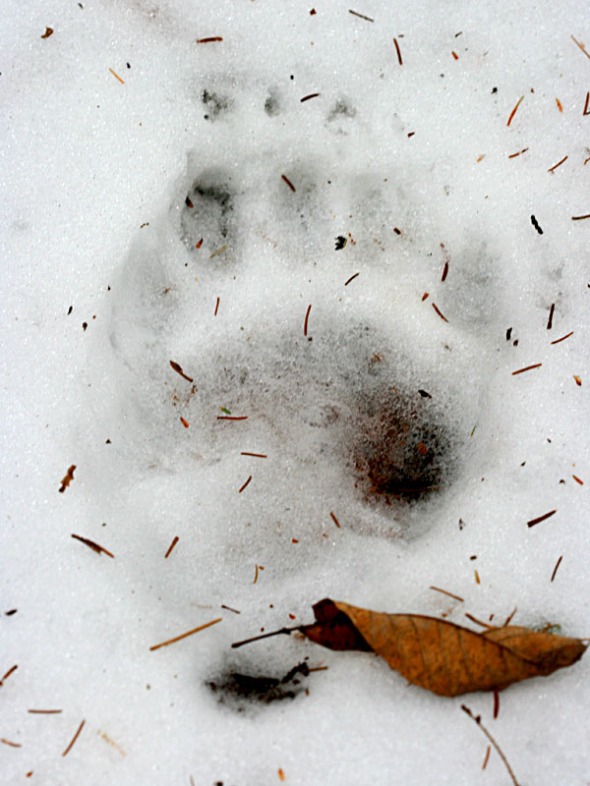 Recent discovery of black bear tracks and scat confirm that hibernation has come to an end, at least for some bears. During the winter black bears lose an average of 23% of their body weight. Because there is a scarcity of food when they emerge from their dens, black bears continue to subsist off the fat that they put on last fall, and thus continue to lose weight. The diet of black bears is high in carbohydrates and low in proteins and fats. When hibernation is over, they head for any available succulents and protein-rich food, including bird feeders.