While meadows and fields are experiencing a sharp decline in insect life at this time of year, one habitat where insects remain active in the fall and often through the winter is ponds. Among the year-round active pond invertebrates are Predaceous Diving Beetles, which can still be observed as they row through the water, intermittently surfacing to thrust their abdomen above the water line in order to procure a bubble of air from which they breathe. Their middle and hind legs are fringed with long hairs, making them efficient at rowing through the water in search of prey or detritus to eat.

Birds have up to 25,000 feathers, and most birds preen, or clean, waterproof and align their feathers, several times a day. Ruffed grouse, as well as most other birds, possess an uropygial gland, or preen gland, on their rump. (Some types of birds, including owls, pigeons, parrots and hawks, lack an uropygial gland and instead have specialized feathers that disintegrate into powder down, which serves the same purpose as preen oil.) The preen gland produces a waxy substance that helps waterproof feathers and keeps them flexible.

Ruffed grouse reach back and rub their beaks on this gland, and then distribute the wax on their body and wing feathers by stroking them toward the tip. The grouse grasps a feather near the base and draws it through the partly close beak, nibbling as it goes. This distributes the wax and cleans parasites from the feathers. In order to preen its head, the grouse must rub it on other parts of its body. Preening is usually done in a fairly open setting but with a degree of overhead protection, so that the grouse can watch for terrestrial predators, while being protected from hawks and owls. 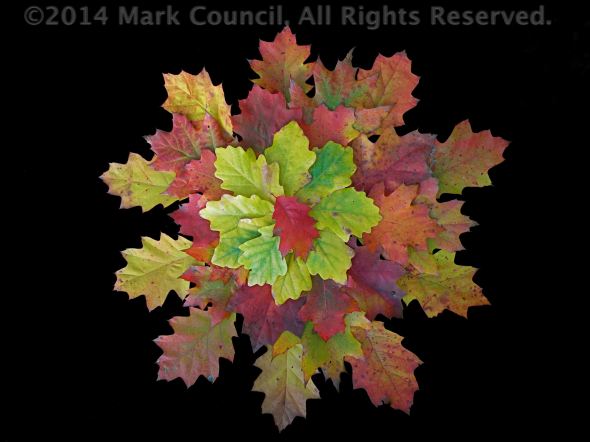 Once in a very great while someone with an eye for beauty and a special connection with the natural world gives us the gift of his or her creativity. Mark Council is a Vermont treasure. You can see more of Mark’s indescribably beautiful leaf mandalas on his Quiet Light Photo Imagery Facebook page. His seasonal photograph gallery can be viewed at his website http://www.quietlightvermont.com.

From the artist’s mouth: This world is so breathtakingly beautiful. All too often we fail to see it until that beauty hurls itself into our consciousness, and then everything becomes extraordinary. When this happens, that’s when I know I’m in the vortex..

The sac-like galls found on Staghorn and Smooth Sumac are anywhere from marble- to ping pong ball-size, and usually become obvious in late summer when they often acquire a rosy pink blush. Inside the thin walls of these galls is one big hollow cavity, teeming with tiny orange woolly aphids (Melaphis rhois). In the spring, female aphids lay an egg on the underside of a sumac leaf, causing the plant to form an abnormal growth, or gall. A number of parthenogenic generations are produced inside the gall, and then in late summer or early fall, the winged females fly to patches of moss, where they establish asexually reproducing colonies. According to biologist D.N.Hebert, these colonies produce the males and sexual females responsible for recolonizing sumac each spring.

Beavers Finally Get Their Due!

Just in case some of my blog readers didn’t see this N.Y.Times article this morning… 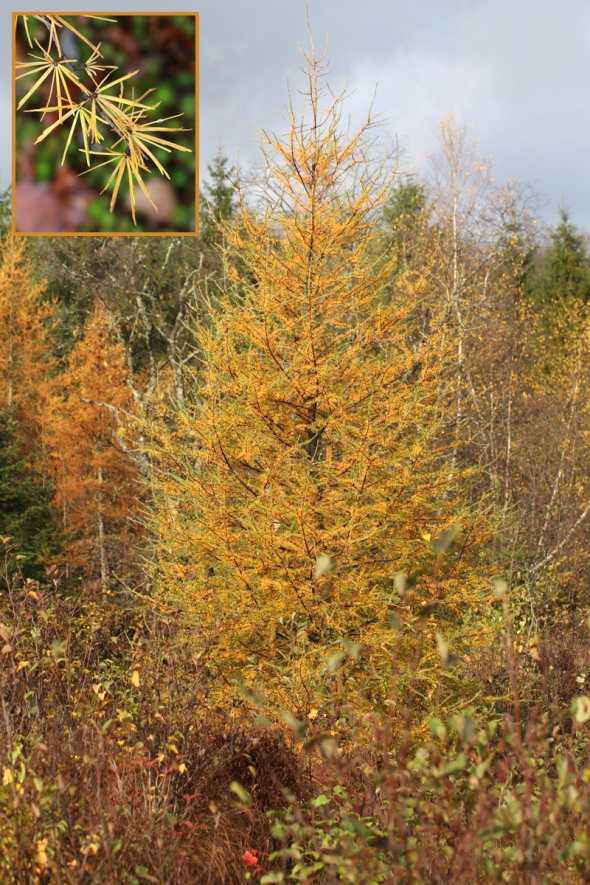 Eastern Larch, Larix laricina, is also known as Tamarack, the Algonquian name for the species which means “wood used for snowshoes.” This tree strongly prefers moist to wet sites in acidic soils and is a common sight in northern New England bogs. Eastern Larch is the only species of conifer in New England that drops all of its leaves/needles every year. The needles are borne on short shoots in groups of 10–20 and prior to falling off, they turn a beautiful golden color.

Most of the eastern U.S. and Canada Common Loon population shifts from freshwater inland breeding locations to coastal marine wintering areas, although some remain at inland freshwater sites throughout winter. Research shows that the very large loons in Maine, New Brunswick, and eastern New Hampshire do not migrate far and primarily overwinter in the Gulf of Maine, while smaller loons from other New England and New York breeding populations migrate to Long Island Sound south to New Jersey.

Some Common Loons begin their diurnal migration to their wintering territory in late summer, but most loons leave their breeding territory in September (high latitudes) and October (low latitudes), and arrive at their destination by the end of November. Breeding pairs and their offspring do not migrate together. Parents generally migrate first, usually separately; young remain on their lakes after adults have departed, until near freeze-up, and often migrate in groups. Although they often migrate singly, common loons do form groups (in some places, hundreds or thousands of birds) on large bodies of water before and during migration. These are referred to as staging areas. When migrating over land, loons can reach an altitude of a mile and a half; over water they usually fly within 300 feet of the surface of the water.