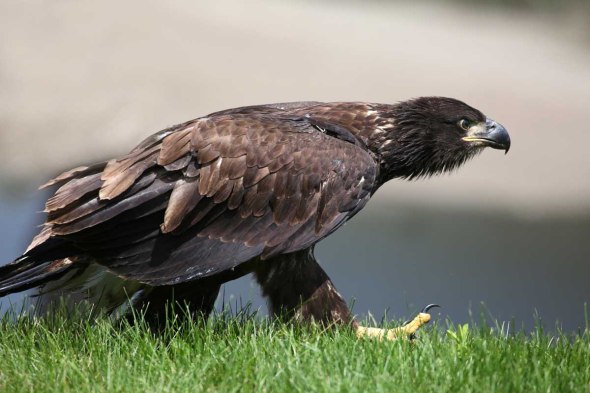 For several weeks before leaving their nest, young bald eagles constantly flap their wings, occasionally lifting themselves off the nest several inches in mid-air. Eventually they succeed in making short “flights” to nearby branches and then back to their nest. The young eagles are strengthening their wing muscles, practicing landing, and beginning to master flight.

Sometime between 8 and 14 weeks juvenile bald eagles leave their nest. Many fledge successfully, but up to half of the nest departures are unsuccessful, with the young ending up on the ground where they may stay for weeks before flight is achieved. During this time the parents usually continue to feed their young, but the juvenile eagles are far more vulnerable to predators. If the flightless, grounded juveniles are approached or threatened, or if they simply want to move from one spot to another, they walk or run on the ground (see photo).

The young bald eagle pictured was blown out of its nest prematurely and landed on the ground. Eventually it managed to fly back up onto a branch in the nest tree. The parents continued to feed the eagle while it was on the ground, as well as after it was back up in the tree. (Thanks to Linda and Roger Whitcomb for photo op.)

This entry was posted on July 17, 2015 by Mary Holland. It was filed under Adaptations, Bald Eagle, Bird Nests, Birds, Fledging, Fledglings, Flight, July and was tagged with Haliaeetus leucocephalus.