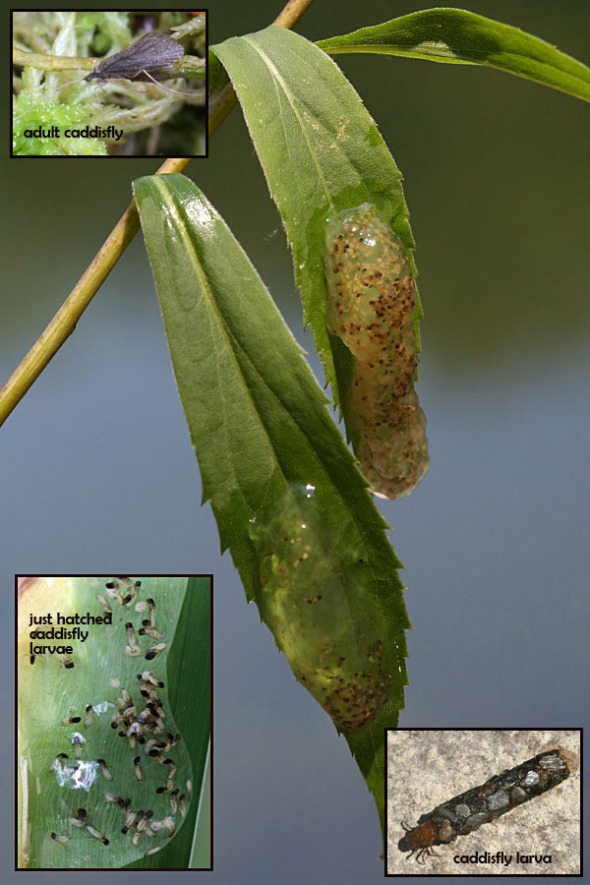 Most caddisflies lay their eggs in or near ponds or streams. A very few species (in the family of northern case makers, Limnephilidae) deposit their eggs above the water on aquatic vegetation in a one- to-two-inch-long mass of jelly (some species’ eggs lack the jelly). Up to 800 eggs (the tan spots within the jelly in yesterday’s post) are laid at one time in one mass. Depending on the species, the eggs take from several weeks up to ten months to hatch. These masses are usually situated so that once the eggs hatch, the larvae will drop down into the water, where they will spend their larval and pupal stages.

Caddisflies are closely related to butterflies and moths, and one of the features they have in common is that the larvae have silk glands in their lower lip. Thanks to the ability to spin silk, the caddisfly larvae build portable cases or attached retreats out of natural material that is available. Some species build elongate tubes out of pieces of plants, sand, sticks or pebbles and reside in them while they drag them along with them wherever they go. Other species attach their cases with silk to crevices in or the bottom of stones in streams. Each species of caddisfly larva always constructs the same type of case, so that you can often tell the genus or even species of caddisfly by the appearance of its case.

The larval stage of a caddisfly can last two to three months or up to two years, depending on the species. Most species spend the winter as active larvae. When it is ready to pupate, the larva attaches its case with silk to something immoveable, such as a large rock. Inside its case, the larva spins a cocoon and eventually pupates inside of it. In two to three weeks the sharp-jawed pupa cuts its way out of its cocoon and floats up to the surface of the water where it emerges as a winged adult, often using its pupal skin as a raft for support during this process. Adult caddisflies live for about 30 days, during which time the males form mating swarms to attract females. After mating takes place, the egg-laying begins.