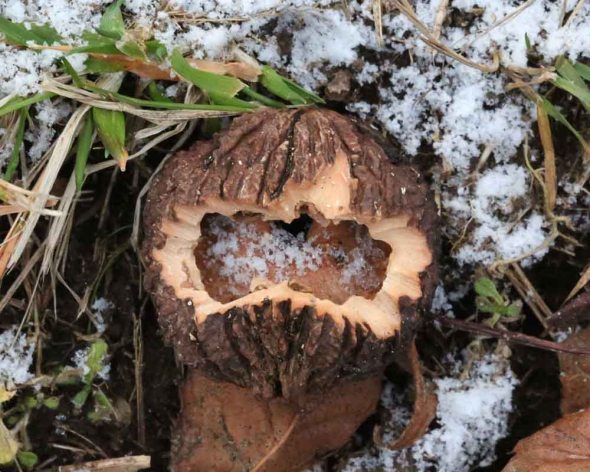 The method in which a nut has been opened depends on both the species of nut as well as the species of animal that opened it. To complicate things further, it can be difficult to ascertain who opened a nut as a given species, such as the Red Squirrel, often has more than one way of opening a nut. However, a given squirrel usually chooses one way to open a nut and consistently uses that method, so that if you come upon a pile, or midden, of nuts eaten by a Red Squirrel, the nuts will most likely all have been opened in the same way.

The beveled edges on the hole in the pictured Black Walnut, the fact that it was opened from both sides (leaving the dividing rib between the two sides intact), and the central location of the holes are indications that a Red Squirrel dined on the nutmeat. The chewing of open, jagged holes on either side of a nut is a Red Squirrel’s most common method of opening a nut. Gray Squirrels tend to remove the entire side of a walnut, as opposed to chewing a hole in it.

This entry was posted on January 4, 2016 by Mary Holland. It was filed under Animal Signs, Black Walnuts, Gray Squirrels, January, Midden, Red Squirrel and was tagged with Juglans nigra, Sciurus carolinensis, Tamiasciurus hudsonicus.