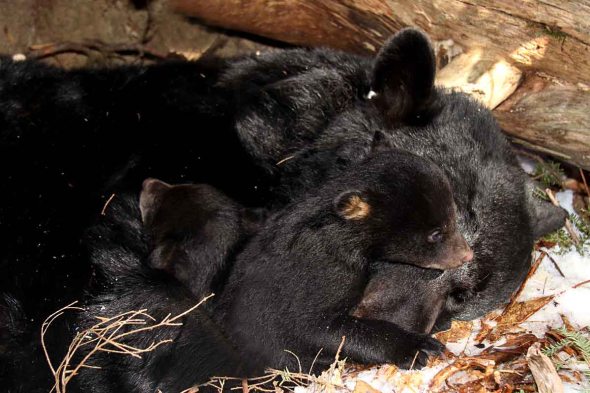 Black Bear cubs are born in late January or February, weighing about eight ounces. The newborn cub(s) immediately crawl to their mother’s teats (she has six) closest to her pelvis to nurse. Later, as the cubs get older, they nurse from the top four and the mother often “switches off” production in the bottom two. At birth a Black Bear cub weighs half to three-quarters of a pound, and when it emerges from the den in April it averages about six pounds.

Most hibernating mammals are not pregnant. The fact that Black Bear cubs are born in late January or February, and the mother bear nurses them for two or three months while she is not eating or drinking is a phenomenon in and of itself – just ask any ravenous nursing human mother.

Milk production and intake increases four-fold after the cubs emerge from the den. At peak lactation (June and July) a black bear cub consumes about 30 ounces of milk a day. If a bear has two or three cubs, that means she must produce two or three quarts of milk a day. The milk of Black Bears is very rich: human (and cow) milk is about three to five percent fat while Black Bear milk is around 20 to 25 percent fat. In addition, the carbohydrate composition of the Black Bear mother’s milk while she is nursing in the den is relatively high compared to the carbohydrate composition found in milk after denning; the protein content after denning is double that of milk produced during hibernation.  At roughly six to eight months of age, Black Bear cubs are weaned. (Thanks to Ben Kilham for photo op.)