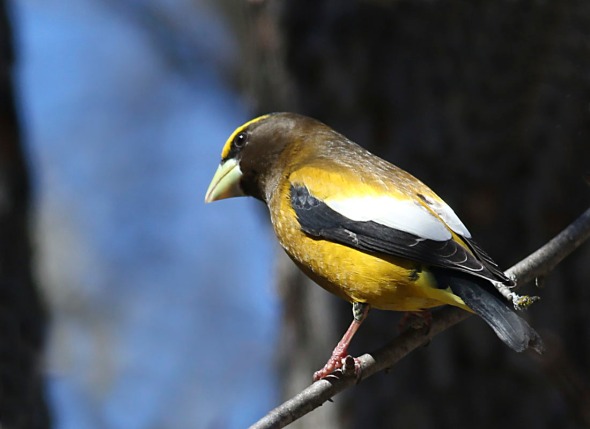 The eastern expansion of evening grosbeaks is mainly attributed to the accessibility of winter food in the form of box elder fruits.  These trees were planted as windbreaks on the prairies, and as ornamentals in northeastern cities.  Their seeds persist into the winter, allowing erratic winter flocks from the west to overwinter further east.  Some overwintering birds remained here to nest, and thus began the expansion of their breeding range.  Some ornithologists also believe that the recurring spruce budworm outbreaks in boreal forests facilitated eastward expansion by providing food in the summer months.  Feeding birds became popular in the 1930’s, and may also have contributed to this range extension.

In a typical year in the Northeast, many birds migrate south of their breeding grounds to spend the winter.  From March to early May, most of these individuals return to northern and western coniferous forests to breed and we have a greater chance of seeing them at feeders (along with hungry bears). (Photo: male evening grosbeak.  Note bill is beginning to show the green tint it has during the breeding season.)

This entry was posted on April 13, 2016 by Mary Holland. It was filed under April, Box Elder, Evening Grosbeak, Migration, Passerines, Uncategorized and was tagged with Coccothraustes vespertinus.