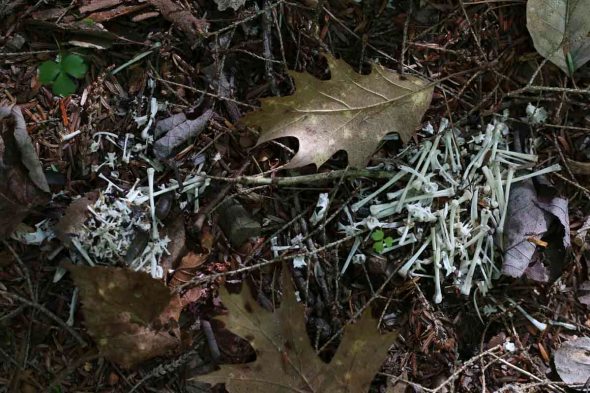 Lying at the base of a large Eastern Hemlock I recently found two piles of bleached bones.  One pile consisted of mostly vertebrae; the other pile had numerous tibias, humeri and ribs.  All were the appropriate size and shape to have come from several Eastern Chipmunk skeletons – at least four or five.   How did they end up in two distinct piles?

The lack of any fur indicated that regardless of how these bones came to be here, they were deposited quite a while ago.  The lack of any partial skulls or jaw bones and the large number of bones in each pile led me to believe that these were not the remains of two pellets that had been regurgitated by resident Barred Owls. No wild owl pellet I’ve ever dissected, including the large pellets cast by Snowy and Great Gray Owls, has contained even half this many bones, and most contained at least part of a jaw bone.

If not pellets, then scat?  How likely is it that a predator could catch and consume multiple chipmunks rapidly enough so that they would end up in the same pile of scat?  One feasible explanation could be that a fox, coyote or fisher preyed on young, inexperienced chipmunks, but the bones were adult-size bones.

Perhaps these two piles are the remains of a predator’s cache – perhaps a bobcat?

The possibilities are endless as to how this chipmunk graveyard came to be.  However, none of the theories proposed here can explain the dissimilarity between the types of bones in each pile.  If any naturally curious readers have insight into this phenomenon, your thoughts are welcome!