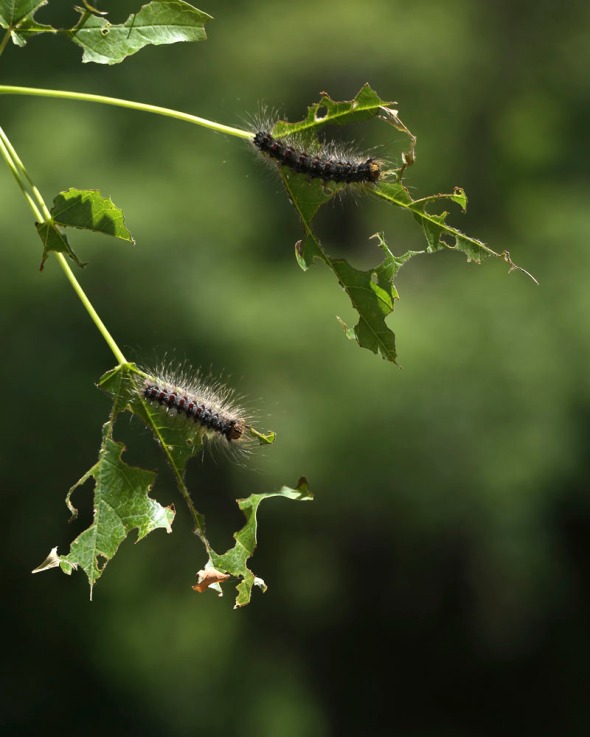 The Gypsy Moth was introduced into the United States in 1869 by a French scientist living in Massachusetts. Since then its range has expanded to include the entire Northeast south to North Carolina and as far west as Minnesota and Iowa.  The consequence of the introduction of this insect is staggering.  According to the U.S. Dept. of Agriculture, since 1980, the Gypsy Moth has defoliated close to a million or more forested acres each year. In 1981, a record 12.9 million acres were defoliated. This is an area larger than Rhode Island, Massachusetts, and Connecticut combined.

The Gypsy Moth females lay their eggs, usually on host tree trunks, in late summer.  The eggs overwinter and hatch in the spring.  Gypsy Moth caterpillars feed on a variety of species of shrubs and trees, with White Oak being their preferred host, metamorphose, mate and repeat this process.   Usually their numbers are not overwhelming, but due to the weather conditions we’ve been experiencing, the caterpillar population has skyrocketed in some areas, especially in southern New England.

Conditions were very dry in parts of New England in May 2014 and May 2015, which impeded the growth of a certain kind of Japanese fungus (Entomophaga maimaiga) that keeps the Gypsy Moth caterpillar population under control. Without this fungus present to keep their numbers in check, Gypsy Moths have flourished.   Although there was some rain this spring, there were many areas that did not get enough to benefit the fungus, and in these areas, trees are now stripped of their leaves.  It is possible in places in southern New England to track the pattern of rainfall simply by looking at where trees are still in full leaf.  Fortunately, the time has come for Gypsy Moth caterpillars to pupate, so most of this year’s destruction has already occurred.  Here’s hoping for a rainy May next year.

This entry was posted on July 18, 2016 by Mary Holland. It was filed under Caterpillars, Gypsy Moth, Insects, July, Larvae, Uncategorized and was tagged with Entomophaga maimaiga, Lymantria dispar dispar.