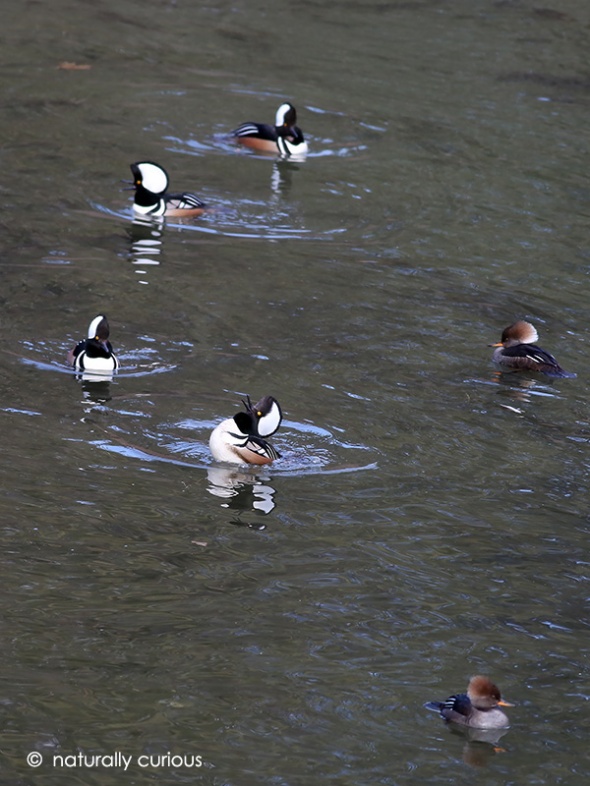 Before Hooded Mergansers seek out their nesting cavities in snags and stumps they engage in extensive courtship displays. Males tend to outdo females when it comes to these displays. As the accompanying photograph illustrates, courtship occurs in small groups consisting of at least one female and several males. Males engage in many more types of displays than females. The extent of female courtship consists mainly of head-bobbing and head-pumping. Male displays include crest-raising, head-throws with turn-the-back-of-the-head, head-pumping, head-shaking, upward-stretch, upward-stretch with wing-flap and ritualized (repeated) drinking.

Head-throws  (see male in foreground of photo) are the most elaborate display. With crest raised, males bring their head abruptly backward touching their back. A rolling frog-like crraaa-crrrooooo call is given as the head is returned to the upright position and turned away from the intended female. This call sounds so much like a frog that the first time I observed courting Hooded Mergansers I thought it was pure coincidence that I was watching male mergansers display while Leopard Frogs were simultaneously giving their snore-like call. In actuality, the displays as well as the vocal accompaniment were being produced by the mergansers.  (Note that one female Hooded Merganser appears not to be all that impressed.)

This entry was posted on March 10, 2017 by Mary Holland. It was filed under Courtship, Courtship Display, Hooded Mergansers, Leopard Frog, March, Uncategorized and was tagged with Lophodytes cucullatus.