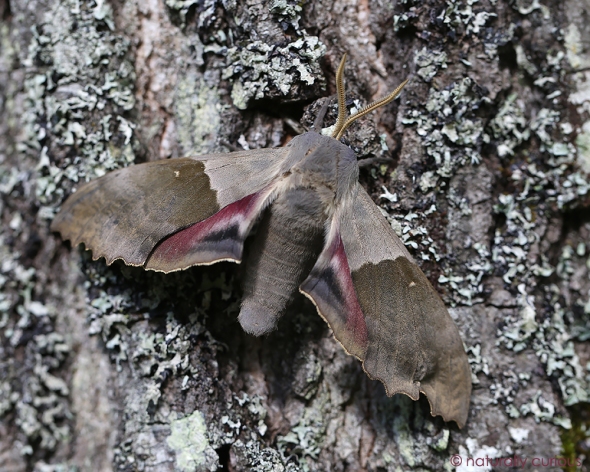 June is well-known for the giant silk moths that emerge this month, but there are other large moths that are encountered as well, one of which is the Poplar Hawk-moth (Laothoe populi). Hawk-moths, also known as Hornworms (their larvae, which feed mainly on species of poplar, usually have a horn), are a type of Sphinx moth, which are known for their fast, enduring flight. One of the more familiar species of this family is the day-flying Hummingbird Hawk-moth, which can be seen hovering at flowers while sipping nectar with its proboscis.

Adult Poplar Hawk-moths, with wingspans as large as four inches, emerge in early summer. Their life is so short that they do not have a functional proboscis and do not eat, but concentrate on mating. Females extend a scent gland from the end of their abdomen to lure in the night flying males whose large claspers are frequently wide open as they fly in to lights around midnight. The moths mate and the females lay their pale green eggs on the leaves of poplars and willows, which the larvae eat once they hatch. Fully-grown caterpillars pupate and overwinter in shallow burrows in the ground.