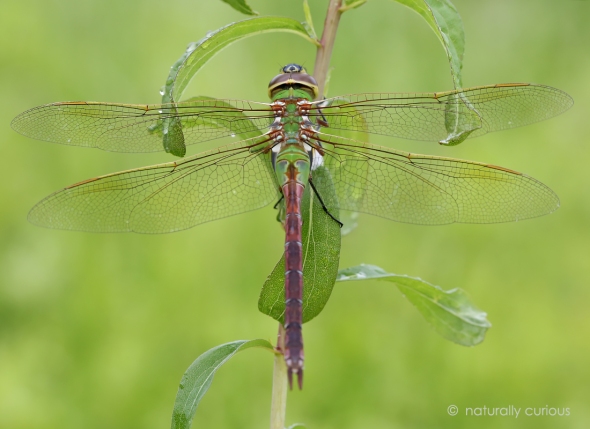 The Common Green Darner (Anax junius) is one of our most common dragonflies. often seen near ponds. The family of dragonflies known as “darners” consists of species with large eyes and long abdomens that tend to rest infrequently and when they do rest, usually hang vertically. The Common Green Darner is the only North American darner in which the male and female usually fly in tandem when the female is laying her eggs on emergent vegetation.

Up to 50 of the world’s 5,200 dragonfly species migrate and the Common Green Darner is one of them. In the fall most (but not all) adult Common Green Darners migrate south to Florida, eastern Mexico and the West Indies. Huge clouds of migrating dragonflies have been seen along the East Coast, Gulf Coast and the Great lakes in autumn. Transmitters weighing 1/100th of an ounce that have been attached to migrating dragonflies confirm that they migrate much like birds. Just like avian migrators, they build up their fat reserves prior to migrating; they follow the same flyway as birds, along the Atlantic Coast; and like birds, dragonflies don’t fly every day but stop and rest every three days or so.

Some dragonflies mate and lay eggs along the way, while others do so when they reach their destination. The eggs hatch, larvae develop and the adults head north in the spring. Unlike birds, migration is only one-way for dragonflies. It is the offspring of the fall migrating generation that migrate north in the spring. Here in the Northeast, most arrive before any resident Common Green Darners have emerged. (photo:  female Common Green Darner)

This entry was posted on June 21, 2017 by Mary Holland. It was filed under Dragonflies, Insect Migration, Insects, Invertebrates, June, Odonata, Uncategorized and was tagged with Anax junius.