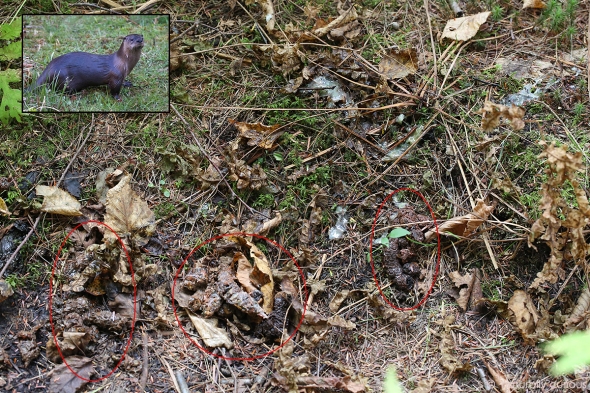 North American River Otters are not territorial in the classic sense of marking territorial boundaries. Instead they mark prime resource areas within their territory. Often, the site is near their den or a productive food area. They visit these sites repeatedly to urinate, defecate and roll around on the ground – so much so that the surrounding vegetation is often dead or dying and is referred to as a “brown-out.”

If an otter has been eating fish, its scat is often just a pile of fish scales. However, if it has been dining on crayfish and it is fresh, the scat can be tubular. No matter what form otter scat takes, a tell-tale sign (in addition to fish scales and/or crayfish exoskeletons) is the presence of clear, white or yellow mucus (scat-jellies). It is not always deposited, but occasionally you do find it. The origin of this mucus is not known – most likely it’s from the otter’s intestinal tract or its anal glands. Research shows that the presence of mucous deposits in some otter species indicates reduced prey availability or reproductive state.  (Photo: Tubular otter scat is circled in red. Mucus is on right side of photo. Thanks to David Putnam and Natalie Starr for yesterday’s and today’s photo op.)

Reasons why Mystery Photo was not

Raccoon: Raccoons have latrines where multiple scat is deposited, similar to otters. However, only otters deposit mucus.

This entry was posted on October 6, 2017 by Mary Holland. It was filed under Animal Signs, Beavers, Black Bears, North American River Otter, Raccoon, Scat, September, Uncategorized and was tagged with Brown-out, Lontra canadensis.