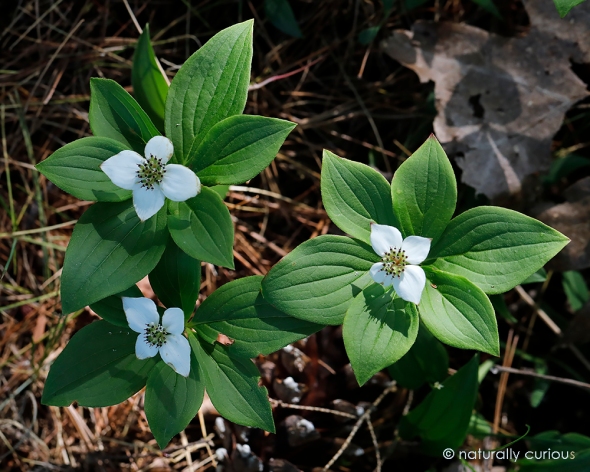 Rarely do you come upon just one Bunchberry (Cornus canadensis), for their underground rhizomes produce colonies of plants, called clones, that are genetically identical to one another (asexual reproduction).

This diminutive member of the Dogwood family is dependent upon pollinating bees and flies for the production of seeds (sexual reproduction). Instead of luring pollinators with showy petals, Bunchberry has four white modified leaves, called bracts, that serve this purpose. (Poinsettia “petals” are also bracts.) The actual petals of Bunchberry are much smaller (about 1/10th of an inch in diameter) and are found in the true flowers clustered in the center of the bracts. Close observation reveals that these tiny petals are very elastic, and when a visiting insect places a foot on one, the petal flips backward, releasing a filament underneath it that snap upwards, flinging pollen out of containers hinged to the filament – an effective means of dusting visiting insects who will further disperse the pollen.