Chicken of the Woods Fruiting 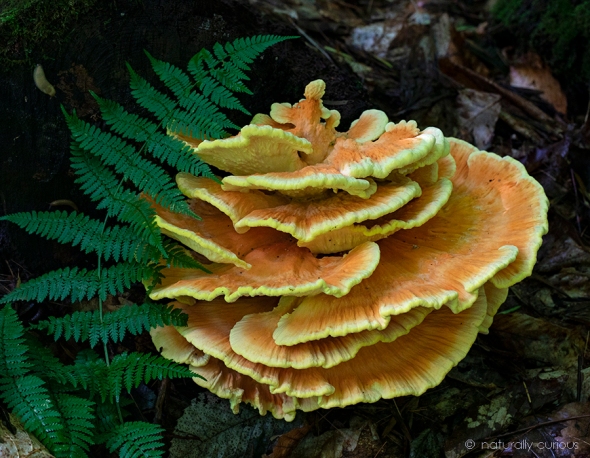 Even though Chicken of the Woods (Laetiporus sulphureus) is one of the few edible fungi that is easily identified, it’s always best to have an expert confirm its identity if you are collecting it for consumption.  The bright yellow and orange coloring of its bulky, fan-shaped shelves is distinctive. On the underside of these shelves you will find tiny pores, instead of gills, containing spores, making it a polypore mushroom.  You can find single clusters of this fungus growing on living and dead trees, as well as logs totally covered with them.

Chicken of the Woods gets its name from its taste and texture, which is much like that of chicken.  If you are foraging for a meal, you want to be sure to pick a young specimen, and eat the outermost portion of the shelves (for their tenderness).  There are several species of Laetiporus fungi; the ones growing on hardwood are preferable for eating.

Chicken of the Woods is saprotrophic – the fungus feeds on dead trees.  It is also parasitic, and kills living host trees by causing the wood to rot, and the tree to become hollow and easily topple over.

For those interested, here is a recipe that the Oregon Mycological Society recommends:

1 cup diced Chicken of the Woods

1/2 cup cream or half and half

Melt the butter in a heavy frying pan over low heat.

Beat the eggs and cream, add salt and pepper to taste; pour into the pan.

As the eggs start to cook, sprinkle the Chicken of the Woods, cheese, shallots and parsley over the top.

Cook for 1 to 2 minutes more until the egg mixture sets.

Fold the omelet over and remove from the heat; cover and let sit for 1 minute.

This entry was posted on September 5, 2018 by Mary Holland. It was filed under Chicken of the Woods, Fungi, Saprotrophic Fungi, September, Shelf Fungus, Uncategorized and was tagged with Laetiporus sulphureus.