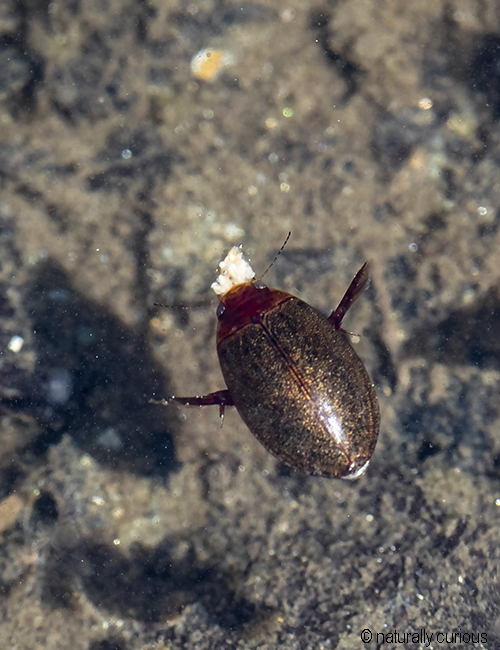 There is a family of water beetles, Dytiscidae, known as Predaceous Diving Beetles.  As their name implies, these beetles are predatory.  They don’t hesitate to attack prey larger than themselves, delivering a sharp bite with their jaws to small fish, tadpoles and frogs.  They then immediately inject enzymes that digest the prey so that the juices can be ingested.

Predaceous Diving Beetle larvae, called “water tigers,” are also predators, grabbing prey with their pincer-like jaws. The larvae are elongated, flattened and can be 2 inches long. They hunt by holding still, waiting with jaws wide open, and then strike suddenly, clutching the prey tightly with their jaws. As with the adults, the pincers are hollow, enabling them to begin sucking the juices of their prey while grasping it. They are often seen when they come to the surface of the water to draw air into spiracles located at the hind end of the body.

This entry was posted on July 26, 2019 by Mary Holland. It was filed under Aquatic Insects, Beetles, Insects, July, Predaceous Water Beetle, Uncategorized and was tagged with Dytiscidae.