Dragonflies and damselflies both create what are called “mating wheels” when they mate.  The male grasps the female at the back of her head with the terminal appendages at the end of his abdomen and the female curls her abdomen forward until the tip of her abdomen reaches the male’s sex organs.

Many male dragonflies go to great lengths to make sure their sperm have reproductive success. Prior to mating they often remove any sperm that happen to be in the female from previous matings.  In addition, depending on species, they may leave after mating, fly with and guard the female as she lays her eggs, or remain grasping the female as her eggs are laid.  His proximity to the female during egg laying prevents other males from removing his sperm.

You can’t get much redder than the red of Cardinal Flowers.  Their petals act as brilliant red flags beckoning Ruby-throated Hummingbirds, who favor red, to come drink their nectar (and at the same time, pollinate them).  Because their chief pollinator has wings and the ability to hover as it drinks, Cardinal Flower has no need for a landing platform, which most insect-pollinated flowers have.

Male flowers produce more nectar than female flowers, and hummingbirds seem to know this, as they spend most of their time at the youngest, and therefore male, flowers on the top half of the flower spike.

About two years ago, many, many Naturally Curious readers showered my daughter Sadie with a phenomenal amount of support and compassionate wishes after she lost her husband, Waylon.  Both Sadie and I were stunned by the warmth and generosity of all of you who responded, 99% of whom we have never met.  I just wanted to share with you a recent photograph of Sadie, Otis (4 years old) and Lily Piper (1).  Your thoughtfulness helped make the past two years as good as they possibly could have been, and we thank you from the bottom of our hearts.  As you can see, Otis and Lily Piper are thriving! 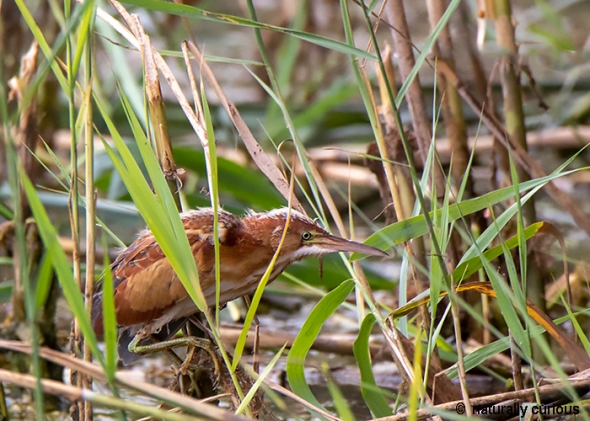 The Least Bittern is the smallest member of the heron family, measuring 11-14 inches in length with a 16-18 inch wingspan.  It is so secretive and well camouflaged that it is heard far more often than seen. A soft cooing song is sung by the males in spring, and a variety of calls are given on their breeding grounds. (You can hear both types of vocalizations at www.allaboutbirds.org/guide/Least_Bittern/sounds.)

This elusive bird of freshwater and brackish marshes is foraging for itself soon after it leaves its nest at two weeks of age.  Long agile toes and curved claws enable the Least Bittern to climb and grasp reeds while it looks for frogs, snakes, salamanders, leeches and other prey from on high.

Like its relative the American Bittern, the Least Bittern freezes in place when alarmed, with its bill pointing up, turns both eyes toward the source of alarm, and sometimes sways to resemble windblown marsh vegetation. (A few wisps of white down still remain on young Least Bitterns at this time of year, as is evident in photo.) 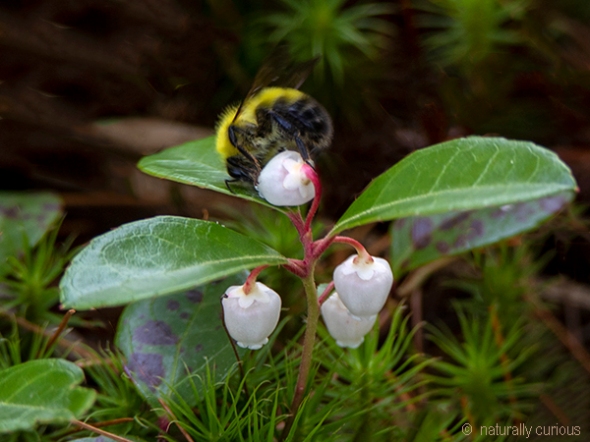 Wintergreen (Gaultheria procumbens), also known as Checkerberry and Eastern Teaberry, is an aromatic, evergreen plant in the heath family (Ericaceae) that creeps along the ground.  This plant loves acid soil, and you can often find it growing alongside Blueberry (Vaccinium sp.).  Its single, white flowers develop into bright red berries which Ruffed Grouse consume with relish.

Not surprisingly, these berries taste like oil of wintergreen. The active ingredient in this oil is synthesized and used as a flavoring in chewing gum, toothpaste, breath fresheners, candy, and medicines, including Pepto Bismol.  This same ingredient, methyl salicate, is related to aspirin, which explains why Native Americans chewed and made a tea from the leaves and berries of Wintergreen to alleviate pain.

Gray Treefrogs are often heard but rarely seen, due both to their cryptic coloration as well as the fact that they are arboreal.  They tend to perch (grasping trees with their toes which bear large, adhesive, mucous-secreting disks at their tips) in vegetation surrounding swamps and ponds, where their robust, territorial and mating trilling can be heard (males call between 500-15,000 times per hour). To hear trilling Gray Treefrogs go to https://www.youtube.com/watch?v=CSkhM24Fi-k.

After choosing a mate and mating, Gray Treefrog females lay up to 2,000 eggs which hatch in 2-5 days.  For the next month or two the tadpoles breath with gills and consume vegetation.  Full-sized tadpoles are green or black with red or orange tails.  Towards the end of summer, the tadpoles begin their transformation into frogs, developing limbs and lungs, absorbing their tails and changing from a diet of plants to one of insects.

Adult Gray Treefrogs are mottled gray or green (depending on their surroundings, temperature, and humidity) and have an uncanny resemblance to lichen. Recently-metamorphosed young treefrogs such as the one pictured are a brilliant emerald green.  (Photo: young Gray Treefrog with adult Gray Treefrog inset) (Thanks to Brian Long for photo op.)