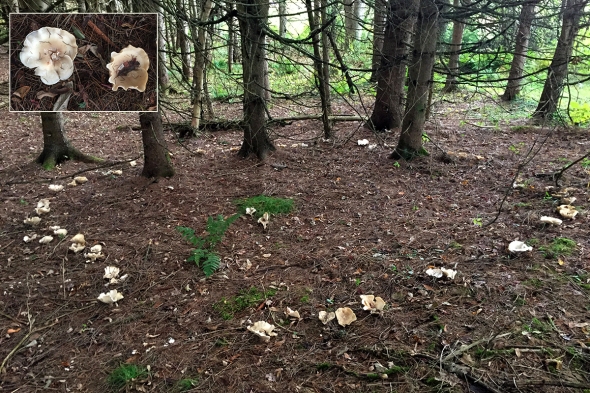 Occasionally, if you’re lucky, you may come upon a circle of mushrooms in the woods or in a lawn.  To some, these are Fairy Rings, where the fairies dance.  To those more scientifically minded, they are the fruiting bodies of an underground fungus (mycelium) that is growing outward in all directions from an initial spot (in the center of the ring), feeding on nutrients in the soil.  As it grows, the mycelieum secretes enzymes into the ground ahead of it. These chemicals break down the organic matter, releasing nutrients so that the mycelium will have food when it reaches this area. When conditions are right for spore production, the active mycelium produces a circle of mushrooms just behind its outer edge.  Growth of the mycelium continues, accompanied by the formation of wider and wider circles of fruiting bodies every year.

There are roughly 60 species of fungi that produce Fairy Rings.  As a rule they form these in evenly composed soil, such as lawns and less frequently in woods.  It’s possible to recognize Fairy Ring evens when they haven’t sent up mushrooms, as they form rings of grass up to 15 feet in diameter that have a distinctly different color or texture than the grass inside or outside of the ring. (A Fairy Ring in France measured 2,000 feet in diameter and was estimated to be 700 years old.)  (Photos by Julie George)