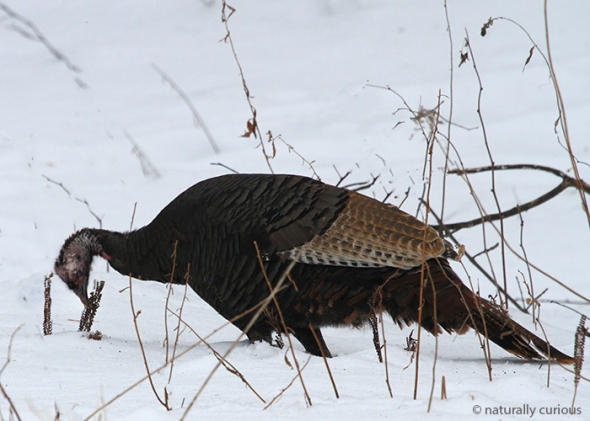 Congratulations to Deb Marnich, the first of many Naturally Curious readers who identified the Sensitive Fern fertile frond visitors as Wild Turkeys.  I had neglected to check and make sure I hadn’t addressed this subject recently on this blog, which is my custom with every post, and indeed, just a year ago there was a post on this very subject.  Judging from the number of correct entries, either I have a very informed readership or their memory is better than mine – quite possibly both!

Wild Turkeys usually forage in flocks as they search the ground for food. Acorns, hickory nuts, beechnuts, ironwood and white ash seeds, hawthorn and witch hazel fruits make up a lot of their diet in fall, winter and spring. In the summer, seeds of grasses and sedges as well as invertebrates are eaten. In winter, when snow has accumulated, leaves of sedges, evergreen ferns, hemlock buds, burdock seeds and spore-covered fronds of sensitive ferns tend to be more accessible and readily eaten.

The fertile fronds of Sensitive Fern (Onoclea sensibilis) persist all winter, sticking up out of the snow as if beckoning to hungry turkeys. Upon finding a clump of these fertile fronds, a turkey will peck repeatedly at them, causing the sori (clusters of sporangia which produce and contain spores) to burst and release thousands of spores onto the surface of the snow.

Naturally Curious is supported by donations. If you choose to contribute, you may go to http://www.naturallycuriouswithmaryholland.wordpress.com and click on the yellow “donate.”

Any idea who has been visiting these Sensitive Fern fertile fronds?  If so, go to the Naturally Curious blog, scroll down to “Comments” and enter yours.  Answer will be revealed in Friday’s post. 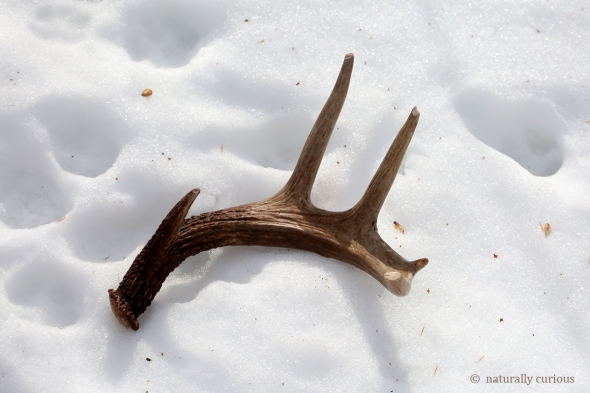 Thanks to Kitty Leonard, who caught the error in today’s post regarding osteoclasts.  They are cells, not chemicals as stated in the post, that become more active when the testosterone level drops after rut.  As Kitty so astutely stated in her comment, “… osteoclasts are cells rather than chemicals. Bone has osteoclasts which break down bone and osteoblasts which build bone. The balance of the actions of the two types makes for healthy bone by continually remodeling the structure. When one predominates in its activity, there is either more build up or more break down.”

White-tailed Deer bucks grow and shed a pair of antlers annually.  The main purpose of these bony growths is to serve as weapons against rival bucks during rut, or mating season.  During this time in the fall, prior to their 24-hour receptive period, does release chemicals to signal their readiness to bucks.  These chemicals keep the bucks’ testosterone level high, which in turn keeps antlers firmly attached to their heads.  Once rut is over, does stop emitting these chemicals, and as a consequence, the bucks’ testosterone level drops significantly.

It is rare that both antlers drop at the same time – usually there are four to eight days between the loss of the first and the second antler. I assumed that bucks needed to knock their antlers against something hard, such as the trunk of a tree, in order to get them to fall off.  However, years ago I witnessed a buck shedding an antler simply by dropping his head and then quickly flicking it upwards, sending an antler flying through the air. (Note pedicle where antler used to be attached. Photo by Alfred Balch)

It’s that time of year again, when the odor associated with skunks wafts through the air, even though most skunks are denned up and in a state of torpor.  This odor is the perfumed urine of Red Foxes, especially intense during their mating season, which begins around the middle of January. They use both urine and feces to communicate their presence, dominance and sexual status to other foxes and do so frequently (urinating up to 70 times per hour when scavenging at this time of year!).  Stumps, logs and other raised surfaces often serve as scent posts.

According to scientist Dr. Mark Elbroch, Red Foxes “employ any of 12 different positions to urinate upon precarious perches…”.  It’s fun to imagine exactly which one was used that allowed both a foot print and urine to appear on the pictured raised log!

Coyote tracks from three different directions led to an area where a deer’s well-cleaned skull was the only remnant of a communal meal. It had been dug up from a spot nearby where it had been cached, and carried to a more protected area to work on.  Coyotes are omnivores, but about 90% of their diet consists of mammals.  Coyote scat I’ve examined has included, among other things, the hair of Muskrat, Snowshoe Hare, White-tailed Deer and small rodents as well as feathers, grass and apples.

That’s not to say Coyotes don’t hunt deer – they do, primarily in the spring (fawns) and in the winter, especially when there is enough snow and/or crust to slow deer down but not Coyotes. However, much of their venison consumption is a result of their scavenging deer carcasses, which they do any time of year. Examine Coyote scat and the chances are great you will find deer hair in it; chances are also great that it came from a carcass, not a living deer.

North American River Otters spend much of their time foraging.  They often have a circuit they travel along rivers and lakes which takes them up to a week or more to complete.  In between bodies of water, they travel overland on well-used paths, often during the day in winter.

These circuits are miles long, and for much of the time otters lope along in typical weasel fashion.  However, in winter the snow permits them to occasionally flop down on their bellies, tuck their front feet next to their chest and push off with their hind feet as they slide effortlessly on top of the snow, both down slopes as well as along flat surfaces.  Once they obtain a certain speed, they give their hind legs a rest and lift them off the ground so as not to slow them down as they slide (see photo).  Otters have been clocked up to 17 miles per hour running and sliding in this manner.