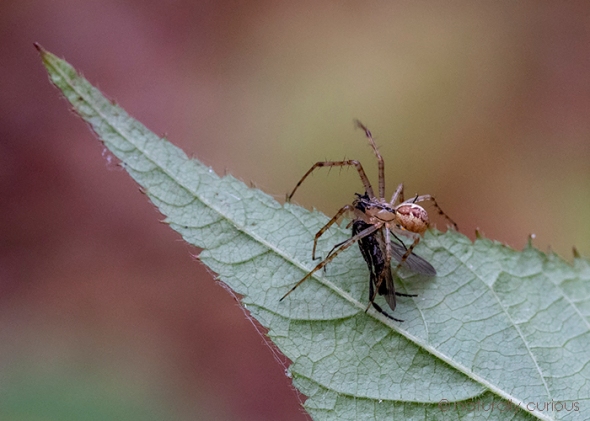 Spiders are ectotherms – warmed and cooled by their environment. In the fall, those outdoor species that remain alive through the winter begin preparing themselves by producing antifreeze proteins that allow their tissues to experience below-freezing temperatures. When a small particle of ice first starts to form, the antifreeze proteins bind to it and prevent the water around it from freezing, thus preventing the growth of an ice crystal. Some species survive in temperatures as low as -5 degrees Celsius.

The pictured hammock spider, still active in late October, is nourishing itself by drinking the dissolved innards of a fall-flying March fly, whose name comes from the predominantly springtime flight period of most March Flies (of the 32 species in the genus Bibio in North America, only three fly in fall).

A common belief is that once cold weather appears, outdoor spiders seek shelter inside houses.  In fact, only about 5% of the spiders you find in your house lived outside before coming into your house, according to Seattle’s Burk Museum.  The reason people tend to notice them more inside may be because sexually mature male spiders become more active in the fall, wandering far and wide in search of mates.