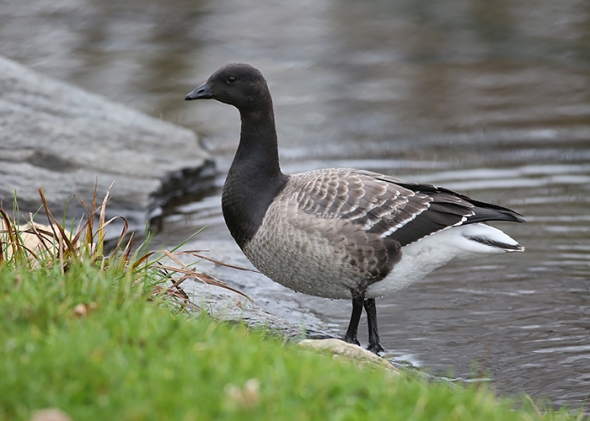 Brants are small geese that travel long distances (up to 3,000 miles) several thousand feet up in the air between their Arctic breeding grounds and their coastal wintering grounds. No other species of goose nests as far north, and few migrate as far. The subspecies that overwinters off the middle of the East Coast, the Atlantic or Pale-bellied Brant, typically migrates from northern Canada to James Bay, where it remains for several weeks building up fat reserves. From there most birds fly nonstop to their wintering grounds in Jamaica Bay and other nearby estuaries of greater NYC and New Jersey, arriving in late October and early November.

Occasionally migrating birds, often juveniles, veer a bit off course (often due to weather-related causes) and end up where they don’t belong. Brants are common winter residents in coastal areas during the winter, but are not often seen far from salt water. This fall a lone juvenile vagrant Pale-bellied Brant appeared one day on the shore of a lake in central Vermont, giving inlanders the opportunity to view a Brant up close. While adult birds have a very sophisticated mechanism for plotting their migration from one point to another and for getting back on course if they are displaced because of weather, first-year birds often lack this skill.

Had this Brant been blown off course in this manner 75 years ago, there would have been concern for its survival, as Brants used to feed almost exclusively on intertidal seagrass during the non-breeding season. However, in the 1930’s a disease devastated eelgrass and consequently the Brant population dropped. Brants that survived adapted to an alternative diet which included sea lettuce, saltmarsh grass and lawn grass, making it possible for a 21st century Brant to exist just fine in the interior of New England, at least long enough to refuel before continuing on its way.