Contents of One Barred Owl’s Stomach 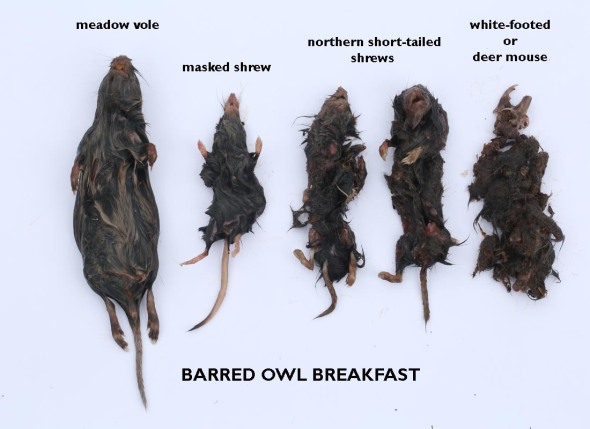 Fantastic guesses, given you had no measurements to work with. Very creative, indeed. Yesterday’s mystery photo was a packed version of the bodies displayed today.

Owls swallow small prey, such as mice and voles, whole, while larger prey is torn into smaller pieces before being swallowed. Once eaten, prey goes directly into the owl’s stomach, as owls have no crop, and thus no ability to store food for later consumption.

Like other birds, owls have a stomach with two chambers — one is the glandular stomach, or proventriculus, (yesterday’s mystery photo) which produces enzymes, acids and mucus and begins the process of digestion. (Because the acids are weak, only the soft tissues are digested.) The second stomach is the muscular stomach, or gizzard, also called the ventriculus. The gizzard lacks digestive glands – it serves as a filter, holding back bones, fur, teeth and feathers that are difficult to digest. The soft parts of the food are ground by the gizzard’s muscular contractions, and allowed to pass through to the rest of the digestive system.

Several hours after an owl has eaten, the indigestible parts remaining in the gizzard are compressed into a pellet the same shape as the gizzard. The pellet travels back to the proventriculs and remains there for up to ten hours before being regurgitated. Because the stored pellet partially blocks the owl’s digestive system, new prey cannot be swallowed until the pellet is ejected. If more than one prey is eaten within several hours, the remains are consolidated into one pellet. (In this case, one very large pellet!)

Update: I left the contents of the deceased Barred Owl’s proventriculus outside last night, and a resident Barred Owl recycled the Meadow Vole and Masked Shrew.

Typically Barred Owls in northern New England hatch in May and fledge, or leave their nest, in June at approximately four to five weeks of age. Unlike most young birds, Barred Owl nestlings leave their nest before they can fly. They initially perch on the rim of the nest and then climb to a branch on the nest tree, eventually dropping to the ground and climbing a nearby leaning tree to perch. The parents feed their young from the time they hatch until late summer or early fall. The fledglings begin short flights at approximately 10 weeks of age, attaining longer flights by 12 weeks. The pictured Barred Owl may have been mastering flight when it fractured a wing and ended up on the ground, soaking wet and very vulnerable to predation. (Thanks to Bob Moyer for photo op and Vermont Institute of Natural Science’s Wildlife Rehab staff for setting wing.)

The number of Barred Owls seen near bird feeders recently makes one question whether these birds are, in fact, in dire need of food. Certainly the extended period of deep snow this winter has made finding prey challenging. Fortunately, the local bird rehab center (Vermont Institute of Natural Science) has not been inundated with starving owls, which indicates that other factors may be involved in the increased number of sightings near homes and feeders. One of these factors could be that Barred Owls are currently laying and incubating eggs, and a few early nesters may even be providing food for young owlets. Whatever the reason, the accessibility of rodents that are attracted to feeders and the food itself that’s in the feeders allows us an all-too-rare glimpse of this common owl. (The mystery of repeatedly finding my suet feeder on the ground every morning was finally solved when I took this photograph – look closely at what the Barred Owl is clutching in its talons.)

Barred Owl Story in the Snow 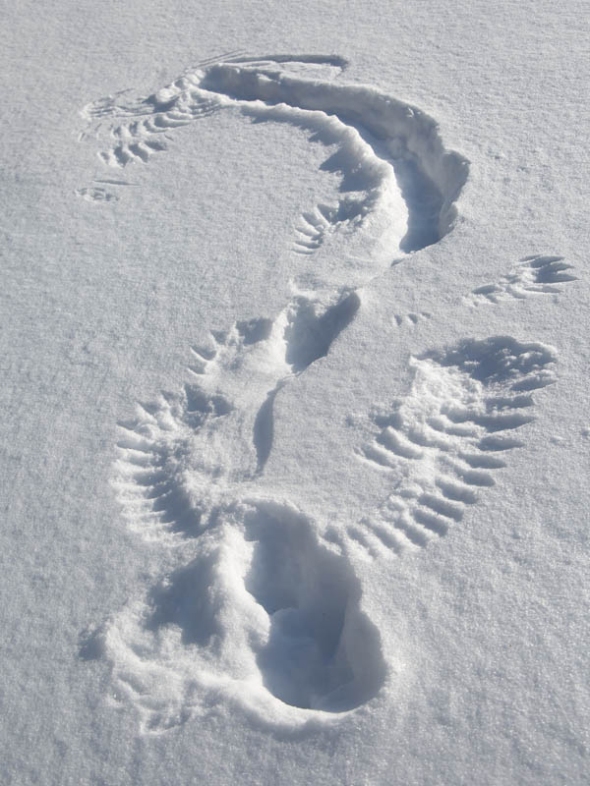 These beautiful impressions in the snow tell the story of a Barred Owl diving feet first after prey, most likely a vole or mouse. The fact that there are no rodent tracks on the surface of the snow tells you that the mouse or vole was well hidden in its tunnel under the snow at the time. Apparently the owl’s talons did not reach their target (at least, no blood or rodent remnants), and the owl continued to plow through the snow in repeated attempts to capture its prey before taking flight.

The presence of facial discs (feathers in the shape of a funnel around each eye that direct sound waves towards the owl’s ear) plus the differing size and asymmetrical placement of an owl’s ear openings allow the owl to discern the direction a sound is coming from, how far away it is and its height relative to the owl – even in the dark or under the snow! The exceptional hearing ability of owls, particularly those in the genus Strix (which includes Barred and Great Gray Owls), enables them to plunge into the snow and often successfully capture prey, sight unseen. (Species of owl was determined by wing length. Thanks to Rob Anderegg and Jennifer Grant for photo op.)

It’s well known that owls have an acute sense of hearing — some species, such as the barn owl, hunt nocturnally by sound alone. An owl’s asymmetrically-placed ears are located beneath the feathers at the edge of its facial discs. This placement, along with the shape of the external ear canals, is thought to contribute to an owl’s keen ability to locate sound. The flesh-colored fold of skin that you see in front of this barred owl’s ear is movable, and reflects and concentrates sound waves coming from behind the bird.