In summer Beavers spend considerable time on land searching for, cutting and bringing vegetation back to their young in the lodge.  Their woody plant preference (they eat large amounts of herbaceous plants during the warmer months, but also some trees) tends towards the inner bark (cambium) of willow, aspen, maple, birch, cottonwood, beech, poplar, and alder trees. This beaver, however, has retrieved a Red Oak sapling for its offspring. 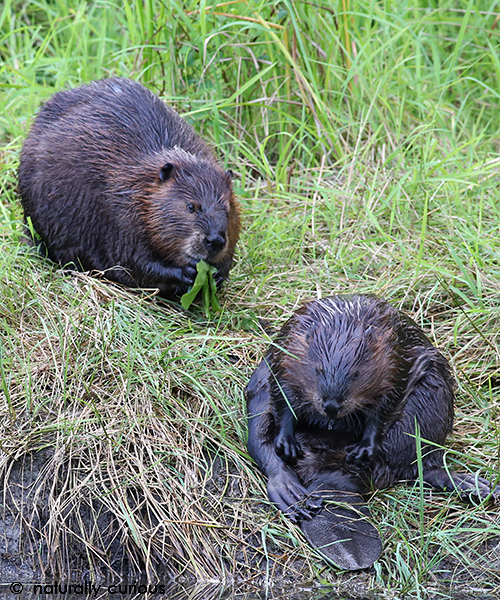 This photograph conveys the essence of a beaver’s summer – eating and grooming… more eating, more grooming. During the summer months, beavers feed on non-woody vegetation (grasses, ferns, aquatic plants, etc.) 90% or more of the time. (During March/April and October/November, their diet switches to 60%-90% tree bark, and during the winter, bark from trees stored under water composes 100% of their diet.)

Little did I know when I wrote yesterday’s post about the silver lining of our low water levels that I would so quickly encounter another predator benefiting from the current drought. I have spent a considerable amount of time this summer watching three generations of beavers do their best to survive as their pond proceeded to diminish to the point of exposing one of their lodge entrances and confining them to an increasingly small body of water. The underwater entrances to a beaver lodge are vital to their protection, and predators are well aware of this.

Yesterday the importance of water as a protective barrier was made very clear to me when a coyote appeared on the opposite shore of the beaver pond from where I sat. It stood for several seconds exactly where the beavers leave the pond on their way to nearby woods to cut poplars and birches which they haul back to their pond to eat. A well-worn trail marks the spot. You could imagine the coyote, upon surveying the shallowness of the pond, telling itself to be patient, as better days were just around the corner.

Moments after the coyote left, the mother beaver got out of the pond precisely where the coyote had been standing and took a few steps before sniffing the ground and then the air (see insert). Being nocturnal, beavers have an acute sense of smell which they use for detecting danger, food and for communication with each other. It took mere seconds for the beaver to detect the scent of the coyote, at which point she turned and sought refuge in the dwindling amount of water remaining around her lodge.  May the heavens open up soon. 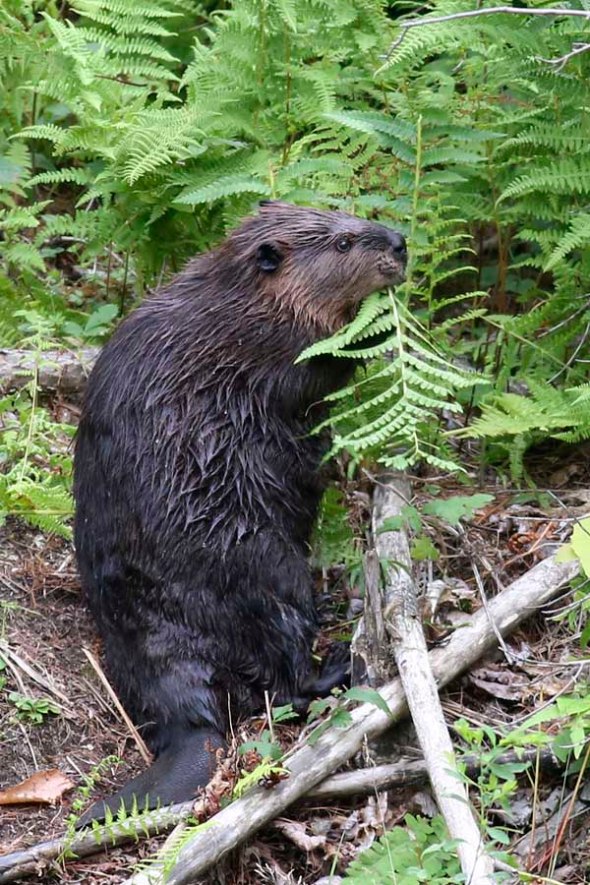 One associates Beavers with a fairly strict diet of bark and twigs. While their winter diet consists primarily of woody plants, they consume a variety of herbaceous and aquatic plants (as well as woody) during the spring, summer and fall months. Shrubs and trees make up roughly half the spring and autumn requirements, but as little as 10% of the summer diet when herbaceous plants such as sedges and aquatic plants become available.

Recent observation of a local active Beaver pond revealed that Interrupted Fern (Osmunda claytoniana), Jewelweed/Touch-Me-Not (Impatiens capensis) and grasses are high on the list of preferred foods of one Beaver family during the summer, although woody plants such as poplars (Populus spp.) and Paper Birch (Betula papyrifera) have also been consumed in fairly large quantities.   All too soon Beavers in the Northeast will be limited to the bark of branches they’ve stored under the ice. Until this time, they take advantage of the accessibility of more easily digested herbaceous plants. (Thanks to the Shepards and Demonts for photo op.)