Non-vocal communication between woodpeckers has become apparent in the last week or so — hairy woodpeckers have started to hammer out bursts of steady staccato drum beats on nearby trees. Both male and female woodpeckers drum year round, but they do so most intensively from January to May, especially during the courtship and early nesting seasons which begin in March. Woodpeckers drum for a variety of reasons: defending territory, attracting a mate, maintaining contact with a mate, signaling readiness for copulation and summoning a mate from a distance. Woodpecker pairs also engage in duet drumming, which is thought to play a role in nest site selection and in promoting and maintaining the bond between mates.

If you are hearing but not seeing a woodpecker drumming, it is possible to identify the species by the pattern and pace of its drumming. According to ornithologist David Sibley, the drum of the Hairy Woodpecker is extremely fast and buzzing, with at least 25 taps per second, but has long pauses of 20 seconds or more between drums. The Downy Woodpecker drums at a slower rate, only about 15 taps per second, and drums frequently, often with pauses of only a few seconds between each drum. (Photo is of a female Hairy Woodpecker.)

Worldwide there are three species of waxwings:  Cedar, Bohemian and Japanese.  The first two species occur in North America, and while they share many traits, they also have their differences.  Both species look somewhat alike, in that they both have crests and black eye masks.  Both species also form nomadic, social flocks that are constantly in search of sugary fruit.   However, there are distinct differences in their distribution, size and plumage.

RANGE:  If you’re in the Northeast, and it’s summer, the waxwing you’re looking at almost assuredly is a Cedar Waxwing, as they are permanent residents, breeding and overwintering here.  Bohemian Waxwings breed in northwest Canada and Alaska, and are only seen in the Northeast in the late fall, winter, or early spring, when they extend their range in search of fruit.  Often they will join flocks of cedar waxwings as they feed.  They are an irruptive species, irregularly appearing south of their normal winter range in large numbers.

SIZE:  Even though Bohemian Waxwings are only about an inch longer than Cedar Waxwings, they are nearly double their weight – Bohemians are chunky, Cedars are svelte.

PLUMAGE:  Both of these species have a black eye mask, a yellow (or occasionally orange, due to diet) tail band and frequently red wax at the tip of some of their feathers. The easiest way to distinguish Cedar from Bohemian Waxwings is to look at the color of their undertail feathers (coverts).  Bohemians’ are rust-colored and Cedars’ are white. Bohemian Waxwings have a gray chest and belly, while Cedars have a brownish chest and yellow belly.

At this time of year you can find both species gorging on crab apples, often side by side, though Bohemians are soon to depart for the Northwest. 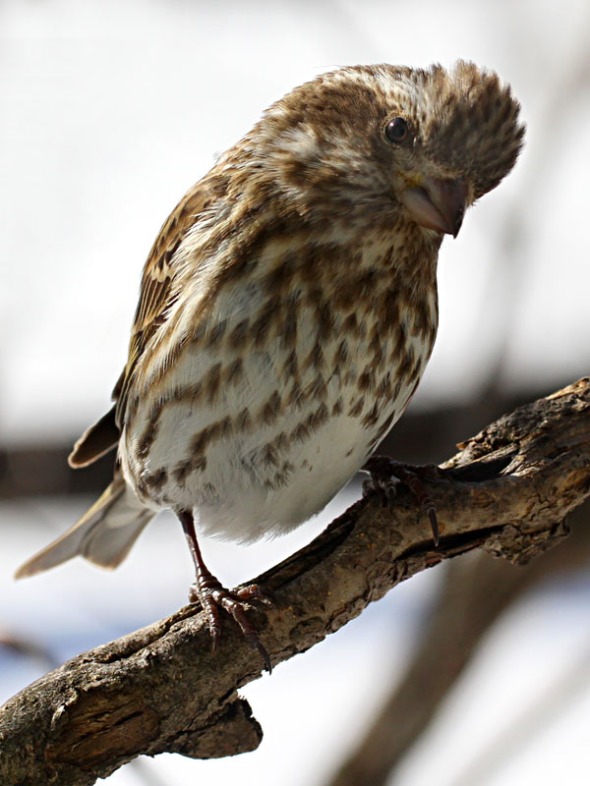 While the eastern population of Purple Finches has declined significantly since the invasion of House Finches (a few California individuals released from a pet store in New York City in 1939 as well as natural expansion of its western range resulted in a population explosion of House Finches in the east), both species can appear at feeders. Without fail, every winter I have to relearn the field marks that distinguish these two birds. Both males and females of these respective species are quite similar, but it is the drab and sparrow-like females that send me flying to a field guide.

Being seed eaters, Purple Finches are attracted to sunflower seed feeders, and if you feed birds, this provides ample opportunity to observe these field marks. While doing so, you may notice that Purple Finches can be fairly aggressive with each other when vying for this source of food. Surprisingly, more often than not, the female prevails. (photo: female Purple Finch) 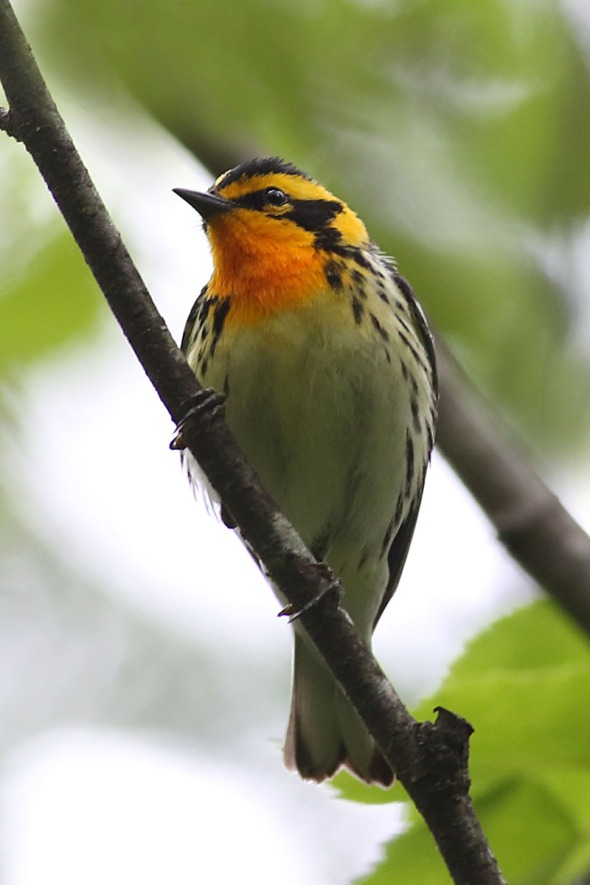 Male Blackburnian Warblers are relatively easy to identify by sight. They are the only North American warbler with an orange throat, and their intense orange breeding plumage is unmistakable. However, because they often forage for spiders and insects high in the canopy where they are hidden from sight, Blackburnians are often located by ear. Their singing peaks soon after they arrive on their breeding grounds. To hear the thin, high-pitched song unmated males sing, as well as mated males when they are near the females, go to http://langelliott.com/mary-holland/BLBUWA_5_songs_with_chips_MB.mp3. (Sound recording © Lang Elliott – langelliott.com & miracleofnature.org)