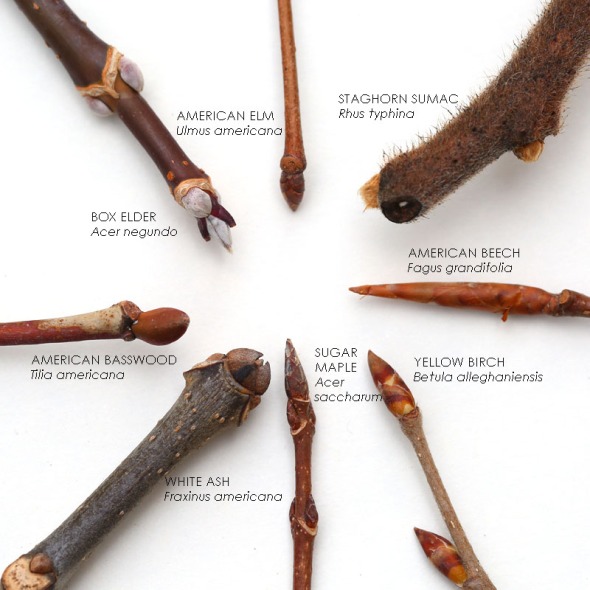 Much of this coming summer’s woody plant growth is contained in embryonic form inside a tree’s buds. Buds contain an undeveloped shoot, leaf, and/or flower. Formed last summer, these buds must survive the freezing and fluctuating temperatures, relatively dry air and the potential insect, bird and fungal damage that may occur during the fall, winter and early spring.

Bud scales, which are small, modified leaves, cover and protect many of these buds. The number of scales, their arrangement, color, presence or absence of hairs or sticky substances are often distinctive. Willows have one visible bud scale (actually two fused into one), whereas pine and fir buds may have anywhere from 100 to 350. The scales on a bud can either be arranged in pairs facing each other edgewise (American Basswood, pictured) or overlapping like shingles (Sugar Maple, pictured). Colors range from the wine-colored bud scales of Striped Maple to the mustard yellow Bitternut Hickory scales. The texture of bud scales has great variation, including the satiny-smooth hairy bud scales of Box Elder (pictured). Many bud scales, such as poplars, are covered by a gummy substance which serves as added protection.

A few trees and shrubs have buds that lack scales. These are referred to as “naked” buds, and often the embryonic leaves are quite hairy. Witch Hazel, Hobblebush and Staghorn Sumac (pictured) are species of woody plants lacking bud scales.

Most buds have multiple scales which, upon falling off when the bud opens, leave a series of horizontally-elongated scars on the surface of the growing stem. By means of these scars one can determine the age of a young branch, since each year’s growth ends in the formation of a terminal bud which produces an additional group of bud scale scars. Continued growth of the branch causes these scars to be indistinguishable after a few years so that the age of older branches cannot be determined by this means.