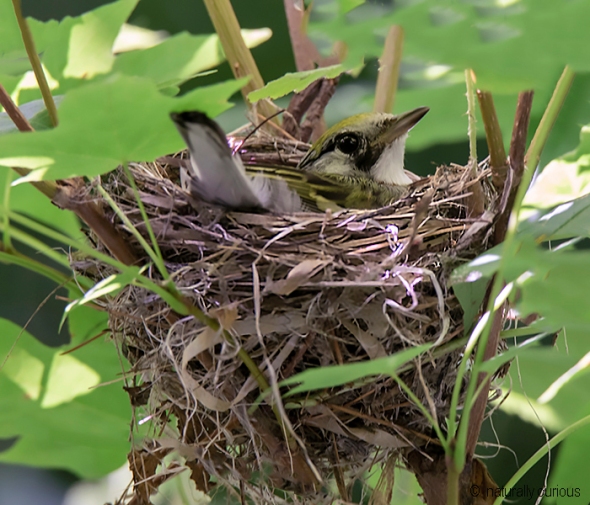 Different species of birds have different numbers of broods (sets of eggs/young).  Eastern Bluebirds can have up to four broods per breeding season, American Robins up to three and Eastern Phoebes often two.  Chestnut-sided Warblers typically only raise one family in a summer. If weather or predation destroys their first attempt, however, they will re-nest, which is just what the pictured female Chestnut-sided Warbler is doing.

By August, a majority of birds have raised their young, but there are birds that nest late in the season, some naturally (American Goldfinches) and some, such as this Chestnut-sided Warbler, by necessity.  Where birds nest, geographically, affects the number of broods they have. Birds nesting at higher latitudes tend to produce fewer broods per year.  Because it gets colder earlier than further south, there is less time to raise their young.  In warmer regions, birds often raise two or even three broods per year. (Thanks to Dean and Susan Greenberg for photo op.)