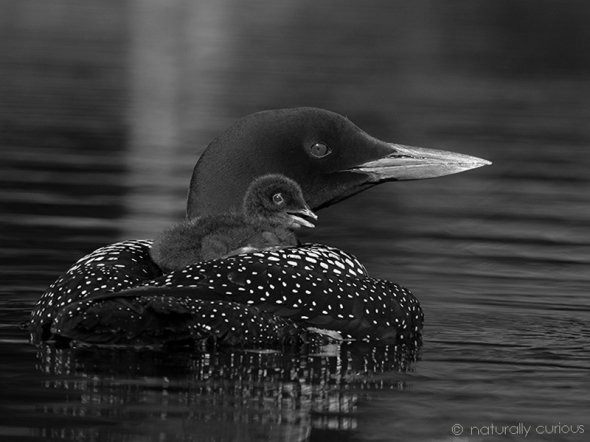 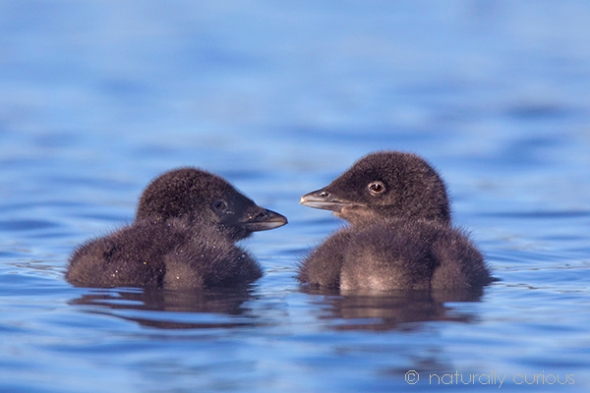 Newly-hatched Common Loon chicks can swim as soon as they hit the water, which they do as soon as their down dries after hatching, usually within 24 hours. Their buoyancy and lack of maneuverability, however, leave them vulnerable to predators. Parents usually don’t stray far from their young chicks due to the omnipresent threat of eagles, hawks, gulls, large fish and snapping turtles.  During their first two weeks, young loon chicks often seek shelter (and rest) on the backs of their parents. 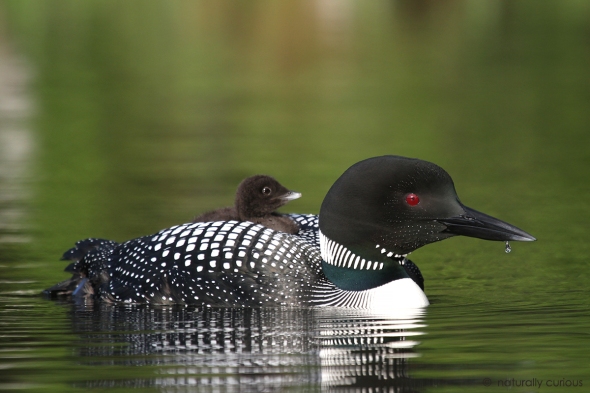 Why do Common Loon chicks ride on their parents’ backs for the first two weeks of their life? There are several reasons. Loon chicks leave their nest as soon as their downy feathers are dry; if they stayed in their ground nest, they would be very vulnerable to predators on land. For the same reason, they rarely return to their nest.

Like many young birds, loon chicks can’t immediately regulate their body heat.  Many birds brood their young in the nest, providing them with warmth and shelter.  Common Loon parents brood their young on their back (and under their wings). On windy, cloudy, cool days, the chicks are nowhere to be seen, huddled under their parents’ wings. On calm, sunny days, they are in full view.

Although they can swim immediately after hatching, loon chicks are very buoyant and have difficulty maneuvering. Predators such as Bald Eagles, Common Ravens and gulls are quick to prey on young loons that have no parental protection. In addition, predatory fish such as Northern Pike and Largemouth Bass are a threat. Once they are several weeks old, the chicks are not only bigger, but they are more mobile and can avoid predators more easily. 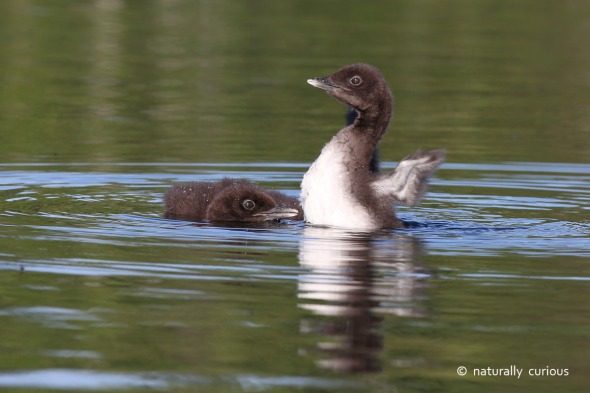 A great deal of learning is packed into a Common Loon chick’s first week.   It learns to ride on its parents’ backs as well as crawl under their wings, a necessity due to its vulnerability, lack of maneuverability, inability to regulate its body temperature.  Communication skills are practiced, with soft “mewing” elicited when a chick is hungry or in need of attention.  The act of preening begins, and the chick successfully retrieves small fish and crayfish from its parents’ beaks.

By the second week, Common Loon chicks are still fluffy balls of down, but they molt a second time, after which they are a much lighter brown.   They dismount from their parents frequently and motor around under their own steam, usually staying very close to a parent.  By the time they are ten days old, their hitchhiking days are over for the most part, and they are on their own when it comes to getting from one place to another. The eleven-day-old Common Loon chicks pictured are just starting to make shallow dives at this point in their development, but still depend largely on meal delivery from their parents.  In another month, they’ll be catching most of their meals themselves, although their catches will be supplemented with food provided by the parents.  In two months their flight, as well as contour, feathers will have replaced their down feathers, and within a couple more weeks of that happening, they will be capable of flight.