The mainstay (up to 60%) of a Pileated Woodpecker’s diet is Carpenter Ants (especially in the winter) with wood-boring beetle larvae (early spring) not far behind.  Flies, caterpillars, grasshoppers, termites, cockroaches and a variety of other insects are also consumed in summer.  However, these woodpeckers are not strictly insectivores.  During the fall and winter they seek out fruit (and nuts), including the fruit of Wild Grape, Virginia Creeper, Poison Ivy, Poison Sumac, American Holly, Elderberry, Blackberry, Raspberry, Hackberry and Crab Apple (pictured).  Roughly one-quarter of a Pileated Woodpecker’s diet may be fruits and nuts.  (Thanks to Sadie Brown for photo op.) 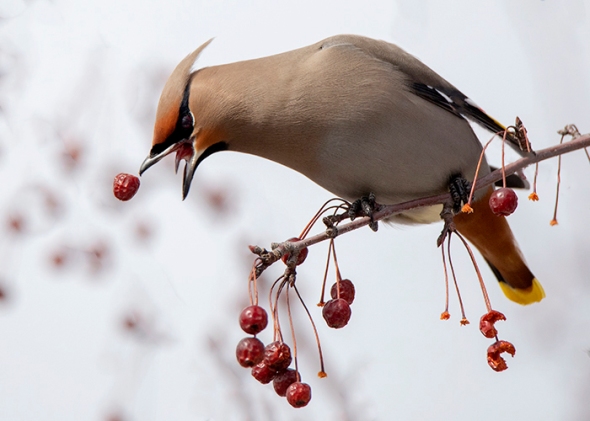 Northern New England and, to a lesser extent, southern New England, are visited by Bohemian Waxwings most winters. This nomadic bird often occurs in large single-species flocks, but sometimes mixes with Cedar Waxwings and/or American Robins. These flocks, varying in size from a few individuals to several hundred, and even a few thousand, range widely during migration and winter. Their dietary preference in the winter for sugary fruits makes crab apple and mountain ash trees (and the ground underneath them) as well as highbush cranberry bushes likely locations to spot them.

Most Bohemian Waxwings begin their migration to their breeding grounds in Alaska and the boreal forests of western Canada in March. Like its close relative, the Cedar Waxwing, it breeds late compared to most birds. Eggs are not laid until mid-June, presumedly in order to time the fledging of their young with the ripening fruits of summer.

If you live in northern Maine, you see Pine Grosbeaks year-round as this is the southern border of their breeding grounds. Those of us living in central Maine and northern New Hampshire and Vermont, if we’re lucky, will glimpse this member of the finch family only during major winter irruptions. (The rest of New England rarely sees a Pine Grosbeak.) It is an infrequent winter visitor in northern New England, irrupting less frequently and remaining further north than other boreal finches.

This is an irruption winter. Because of the dearth of mountain-ash berries and conifer seeds further north in the boreal forest, Pine Grosbeaks are seeking out crabapple and mountain-ash trees in northern New England.

A flock of Pine Grosbeaks will descend on a tree and strip it of its fruit in no time. Anyone who has watched these entertaining birds feeding knows that they are incredibly agile acrobats, stretching their necks and contorting their bodies in order to reach all available fruit. Once they grab ahold of a crabapple, they squash it with their short, conical beaks. They can look quite comical as the fleshy pulp accumulates on the tops and sides of their beak, as well as on the ground beneath them. The object of their desire and efforts is the seeds within the fruit, which they consume with gusto. If disturbed they will fly en masse to the tops of nearby tall trees where they remain until the perceived danger has passed and then return to continue feeding. (photo: female Pine Grosbeak in crabapple tree) 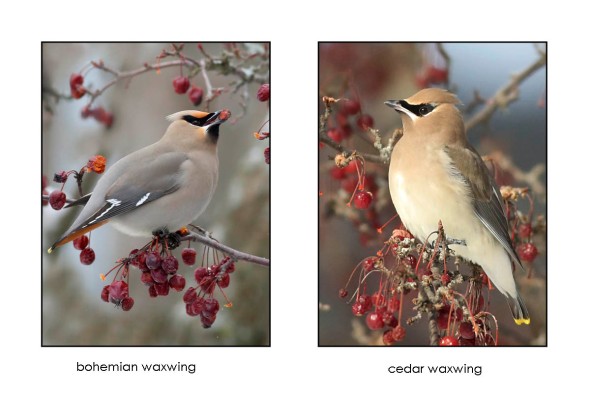 Worldwide there are three species of waxwings:  Cedar, Bohemian and Japanese.  The first two species occur in North America, and while they share many traits, they also have their differences.  Both species look somewhat alike, in that they both have crests and black eye masks.  Both species also form nomadic, social flocks that are constantly in search of sugary fruit.   However, there are distinct differences in their distribution, size and plumage.

RANGE:  If you’re in the Northeast, and it’s summer, the waxwing you’re looking at almost assuredly is a Cedar Waxwing, as they are permanent residents, breeding and overwintering here.  Bohemian Waxwings breed in northwest Canada and Alaska, and are only seen in the Northeast in the late fall, winter, or early spring, when they extend their range in search of fruit.  Often they will join flocks of cedar waxwings as they feed.  They are an irruptive species, irregularly appearing south of their normal winter range in large numbers.

SIZE:  Even though Bohemian Waxwings are only about an inch longer than Cedar Waxwings, they are nearly double their weight – Bohemians are chunky, Cedars are svelte.

PLUMAGE:  Both of these species have a black eye mask, a yellow (or occasionally orange, due to diet) tail band and frequently red wax at the tip of some of their feathers. The easiest way to distinguish Cedar from Bohemian Waxwings is to look at the color of their undertail feathers (coverts).  Bohemians’ are rust-colored and Cedars’ are white. Bohemian Waxwings have a gray chest and belly, while Cedars have a brownish chest and yellow belly.

At this time of year you can find both species gorging on crab apples, often side by side, though Bohemians are soon to depart for the Northwest. 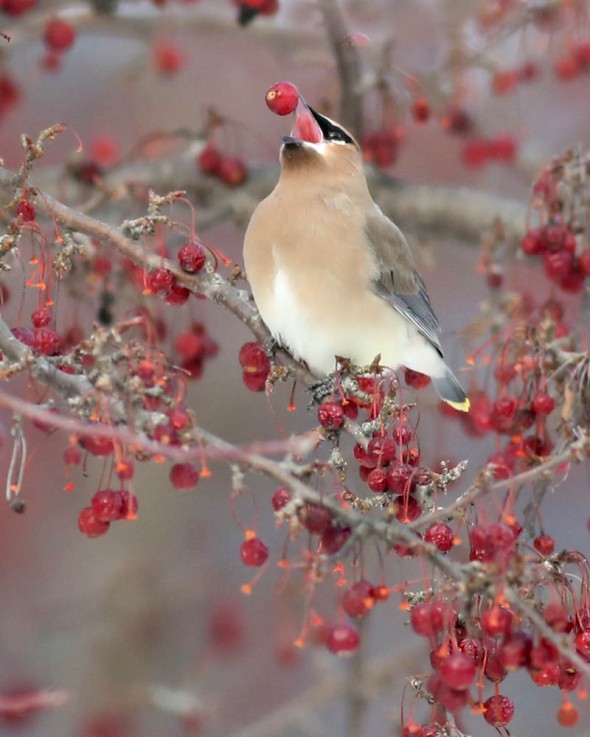 Once on their wintering grounds, Cedar Waxwings tend to wander in flocks in search of sugary fruits to eat. In recent years, they have relied increasingly on crops of ornamental fruit trees such as crabapple, hawthorn and mountain ash. In the summer, you see Cedar Waxwings regularly if they are nesting in your area, whereas if you see them one winter day, you may very well not see them the following day, unless there is an ample supply of fruit nearby. Once they discover a food source, be it fruit on a single tree or an orchard full of fruit, these nomads usually descend, strip and eat the fruit until the branches are bare and then depart for greener (or redder) pastures. 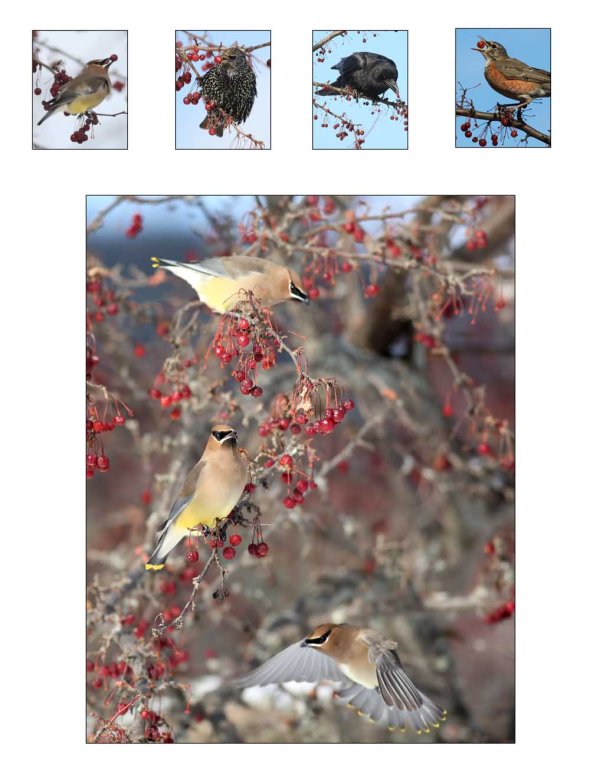 Even without much of anything to go on, all answers were correct! Although Cedar Waxwings were the predominant avian visitor to this crab apple tree when I visited it, there were also robins, starlings and crows feasting away (and presumably several other species, including turkeys, as some of you guessed, at other times).

Cedar Waxwings are among the most frugivorous (fruit-eating) birds in North America. In the winter, sugary fruits dominate their diet to such a degree that occasionally, when the fruit has become overripe and has started to ferment and produce alcohol, the waxwings can become intoxicated and, rarely, die. One individual saw that her front lawn was littered with the bodies of dead Cedar Waxwings on top of the snow, but by the time she went out to dispose of them, the drunken birds had all revived and flown away.

During the winter, Cedar Waxwings travel in flocks of up to several hundred birds. They are nomadic, roaming the countryside in search of crab apples, hawthorns and mountain ashes, as well as serviceberry, juniper, winterberry, dogwood and cedar, among others. Waxwings will descend upon a tree en masse and while perched will bend down and pluck crab apple after crab apple, swallowing them whole, one at a time. Occasionally you will see them hovering briefly in the air while plucking fruit. They are well known for “gifting” fruit to fellow waxwings.

Many birds that eat a lot of fruit separate out the seeds and then regurgitate them. Cedar Waxwings let the seeds pass through them, scarifying the seeds in their digestive tract (breaking down their outer seed coat), which, once the seeds are deposited, allows them to eventually germinate. Because of this, waxwings are considered important seed dispersers for many fruiting plants in North America (including the invasive, non-native honeysuckle which, when eaten during the time feathers are developing, causes Cedar Waxwings to develop orange, not yellow, tail bands).