In late summer and autumn, crickets court by rubbing their forewings together, a practice referred to as stridulation. At the base of each forewing is a specialized vein with a series of hard “teeth,” or ridges – the “stridulatory file.” Only one is fully functional, and in crickets, it is usually the one on the left wing. On the inner, lower edge of the right forewing is the “scraper,” a sharp, hard projection that rubs against the file when the cricket opens and closes its wings during stridulation. In most species,it is the male crickets that “sing,” but both sexes have “ears,” or tympana, on their front legs. After mating, the female cricket deposits her eggs in the soil or in plant tissue, depending on the species. (Photo: female field cricket- note long ovipositor at tip of abdomen between the two sensory organs called cerci, which is lacking in male crickets) 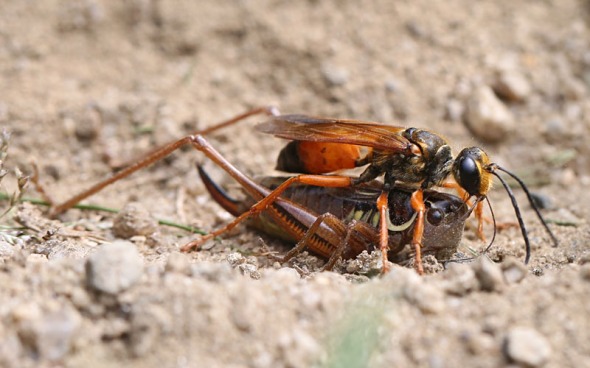 The Great Golden Digger Wasp, Sphex ichneumoneus, is a solitary, predatory wasp whose hunting and nesting techniques are programmed and never vary. Having overwintered underground in a nest dug by its mother, the adult wasp emerges, often in August, and begins preparations for the next generation. She digs several nests in packed, sandy soil, using her mandibles to cut the earth. Emerging backwards from the ground with a lump of soil between her forelegs and head, she flips the soil with her forelegs beneath her body, scattering it to the sides with her hind legs. In this manner she excavates several cells off a central 4-6-inch deep tunnel.

The wasp seeks out prey — often a grasshopper, cicada or cricket – and then stings and paralyzes it. If the prey is small, she flies it directly to the nest. If prey is too large to transport aerially, the wasp will walk with it across the ground, dragging it by its antennae (see photo). She then drops the prey several inches from the nest hole. After crawling down into the nest for a brief inspection, she pulls the prey down into one of the cells while walking backwards. She then leaves to find another insect. When a cell contains paralyzed prey, the wasp lays an egg on the insect. The egg hatches within two or three days and the wasp larva begins eating the insect. Because the prey is not dead, decomposition is delayed, and the wasp larva’s food is relatively fresh. The developing wasps overwinter in the nest and emerge the following summer to begin the process all over again.

If you live near a sunny area of compacted clay and sand that has flower nectar for adults to feed on and crickets, grasshoppers and katydids for their larvae, you may well have a chance to observe this unique ritual. (Thanks to Marian Cawley for photo op.)

Camel crickets are named for their humpback appearance. We don’t often see these wingless insects, for they prefer dark, damp habitats such as under stones and logs, where we don’t often look. However, when there are extreme weather conditions, such as excessive rainfall or the extended periods of hot, dry weather which we have experienced this summer, camel crickets are attracted to damp cellars and crawl spaces, giving us an opportunity to admire their impressive legs. Often mistaken for spiders, camel crickets do have long legs, but only six, not eight, of them. Their two hind legs are obviously longer and stronger than the other four, and enable this cricket to jump three feet high, a skill they use for defense against predators. A local blog reader reports that three nights in a row (camel crickets are nocturnal), due to the force of its jump, a camel cricket tripped a small have-a-heart trap set in their cellar for mice. (Thanks to the Choukas for photo op.)