Gray Squirrels use cavity and leaf nests throughout the year. Both types of nests are retreats used as shelter from the elements and protection from predators, as well as rodent-rearing homes.  Signs of nest-building are plentiful at this time of year, when cold weather is around the corner. Evidence of this activity is present in the form of leafy ball nests (dreys) in trees as well as bare branches discarded on the ground that have had their bark stripped off and shredded.  Squirrels line their nests with dried grasses, lichen and the soft fibers they remove from branches.

Gray Squirrels have two breeding seasons, one from December – March and another May – July (most females mate in the latter season and only mate once a year).  At this time of year, polygamous male Gray Squirrels are aggressively chasing and checking out females to see if they are in estrus and if they are receptive. (An unreceptive female squirrel lets all suitors know in no uncertain terms – using claws and teeth – that she is not interested.)  Male Gray Squirrels can smell females in estrus as far as half a mile away, so the woods are full of hopeful males these days.

Frequently litters this time of year are born in a tree cavity, while the second, late-summer litter is born in a leaf nest (drey).  Cavities obviously offer more protection from the elements and predators than do leaf nests. Most den cavities have been created by decay, lightning, or woodpeckers and are lined with dry leaves, shredded bark and grasses. (Photo:  Gray Squirrel collecting American Beech leaves to be used as a lining for her cavity nest.) 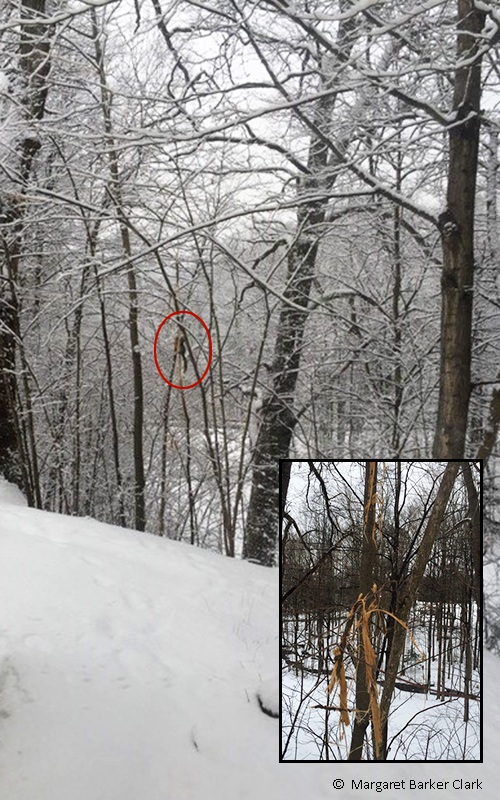 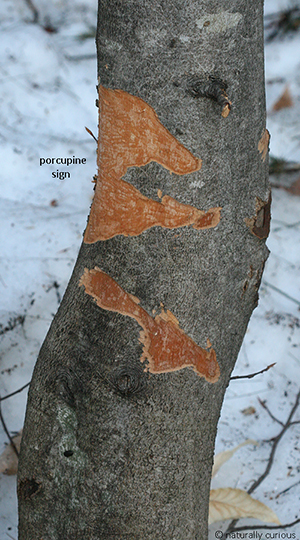 Congratulations to Wanda Rice, the first Naturally Curious reader to recognize sign made by a squirrel collecting nesting material. Many people thought it might be a porcupine at work, but porcupines, as “hellomolly” pointed out in her comment, do not leave strips of bark hanging, while squirrels do.

In the Mystery Photo, an Eastern Gray Squirrel had been shredding and collecting the thin bark of a Maple Sugar sapling to line its nest with.  Gray squirrels nest throughout the year, but nesting activity peaks during their two mating seasons (December -March, and May – July).  They build two types of nests – large, round, leafy nests among tree branches (dreys) and cavity nests, the latter being preferred during the colder months. Abandoned woodpeckers nests as well as natural-formed cavities provide additional protection in the winter from predators as well as the elements. (Drey broods are 40 percent less likely to survive than squirrels born in tree cavities — a hole no wider than three or four inches protects them from large predators such as raccoons.) Both types of nests are lined with soft material such as lichen, moss, grass, pine needles and shredded bark.

The effect of a squirrel’s stripping a tree’s bark depends on the extent of the damage. Usually a young tree is chosen due to the thinness of the bark and the ease with which it can be stripped.  Although a tree can survive with some of its bark removed, it will die if the damage is too severe or bark is stripped off around the tree’s circumference.  Stripped bark not only provides nesting material but the process of stripping the bark exposes the tree’s cambium layer which contains the nutrients and sugars a tree has produced and which squirrels readily consume. (Eastern Gray Squirrel photos by Margaret Barker Clark)

Naturally Curious is supported by donations. If you choose to contribute, you may go to http://www.naturallycuriouswithmaryholland.wordpress.com and click on the yellow “donate.”