Walking Fern (Asplenium rhizophyllum) is a very distinctive looking fern, having leathery arching leaf blades which end in a long, tapering tip. This evergreen fern is often found growing in large colonies on moss-covered limestone rocks.  The derivation of its common name is what makes this plant so unusual — the leaf blades are capable of rooting at their tips and forming new plants at some distance from the parent plant, making it look as if the fern is “walking” over the rocks it grows on. While extinct in Maine and critically imperiled in New Hampshire and Rhode Island, it is locally abundant in much of the rest of New England. 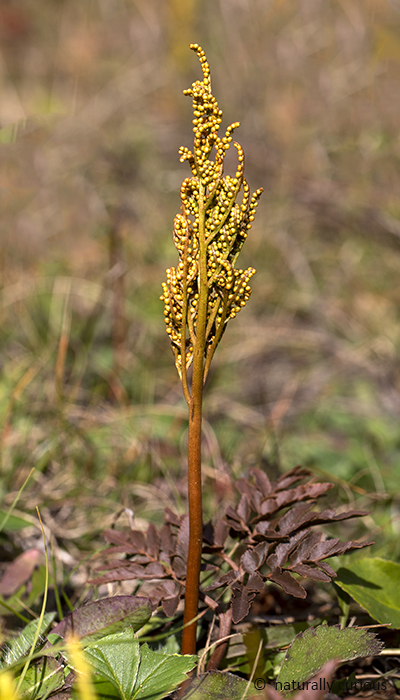 There are several species of Grape Ferns in the Northeast, all of which are true ferns, but they are not closely related to the plants we generally think of as ferns. Like other ferns, Grape Ferns do not have flowers; they reproduce with spores, not seeds. A single stalk divides into two blades – one of which is sterile and does the photosynthesizing, and one of which is fertile and bears spores. It is the resemblance of this plant’s clusters of spore-bearing sporangia to miniature clusters of grapes that gives this group of ferns its name.

Cut-leaved Grape Fern, Sceptridium dissectum, is one of the most common species of Grape Ferns in the Northeast. It is often found on disturbed land, is roughly 6” to 8” tall, and has an evergreen sterile frond that appears in July, turns bronze in the fall and dies back in May.  The fertile frond has branched clusters of yellow sporangia containing spores which mature at this time of year. 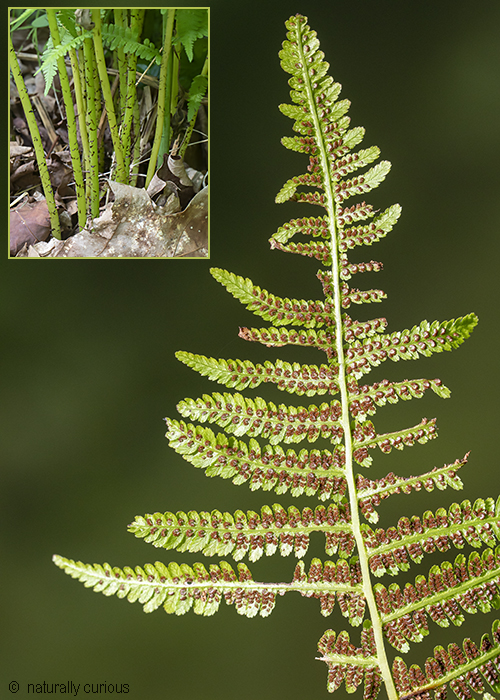 Ferns are non-flowering plants which reproduce by spores, not seeds, and have a vascular system that transports fluids (unlike mosses, algae and liverworts).  Spores are typically located inside a capsule, or sporangium.  In many species of ferns, clusters of sporangia, called sori, are borne on the underside or margins of their fronds.  Often an indusium, or protective flap of tissue, covers each sorus, protecting the developing sporangia.  If you like to be able to give a fern a name, you will find that the shapes and arrangement of sori are a valuable identification tool.

Northern Lady Fern, Athyrium filix-femina, is a fairly common fern found in moist woods, swamps, thickets and fields.  It appears quite lacy and often grows in a somewhat circular cluster.  There are two distinguishing characteristics which are particularly helpful in recognizing Lady Fern.  One is its eyebrow-shaped sori.  If you look on the underside of a spore-bearing frond you will find that each sori is slighted curved, or arched, like an eyebrow.  The other diagnostic feature is the scattered thin, dark brown scales that are found on the stipe – the section of the fern’s stem between the ground and where the leafy frond begins.

This time of year, when the spores of many fern species are maturing, is a good time to learn the different ferns in the Northeast.  There are many excellent field guides to ferns.  One that you can easily tuck into your pocket is Lynne Levine’s Identifying Ferns the Easy Way.

This photograph conveys the essence of a beaver’s summer – eating and grooming… more eating, more grooming. During the summer months, beavers feed on non-woody vegetation (grasses, ferns, aquatic plants, etc.) 90% or more of the time. (During March/April and October/November, their diet switches to 60%-90% tree bark, and during the winter, bark from trees stored under water composes 100% of their diet.) 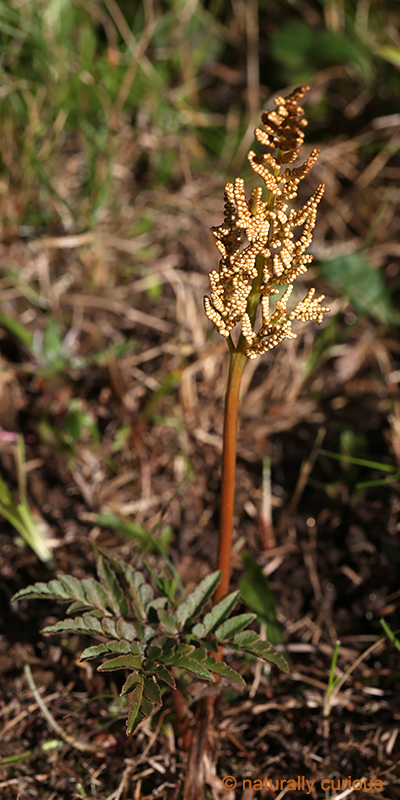 There is a group of evolutionarily ancient ferns referred to as “Grape Ferns.” Although they are true ferns, they are only distantly related to the ferns growing today. They derive their common name from the resemblance of their (spore-producing) sporangia to a bunch of tiny grapes. Grape Ferns have two blades. One is sterile and does the photosynthesizing; the other is fertile and bears the grape-like sporangia.

Different species of Grape Fern mature at different times during the summer. Leathery Grape Fern (B. multifidum; Sceptridium multifidum) is the largest of the Grape Ferns. Its triangular, sterile blade is very leathery and fleshy. If the fern is growing in full sun, the stalk of the sterile blade is usually quite short, and the branching, fertile blade rises above it. The spores on the fertile blade mature in late summer or early fall.

Hay-scented Fern (Dennstaedtia punctilobula) is well-named, for when the leaves, or fronds, are brushed against or bruised, they release a fragrance reminiscent of fresh mown hay. This fern often grows in colonies, spreading from rhizomes underground. Hay-scented Fern is easily detected at this time of year because the fronds turn beautiful shades of pale yellow. It can be found in both dry and moist soil as well as in full shade and full sun. Hay-scented Fern often thrives in wooded areas where there is a high population of White-tailed Deer, as it is not a preferred food source. 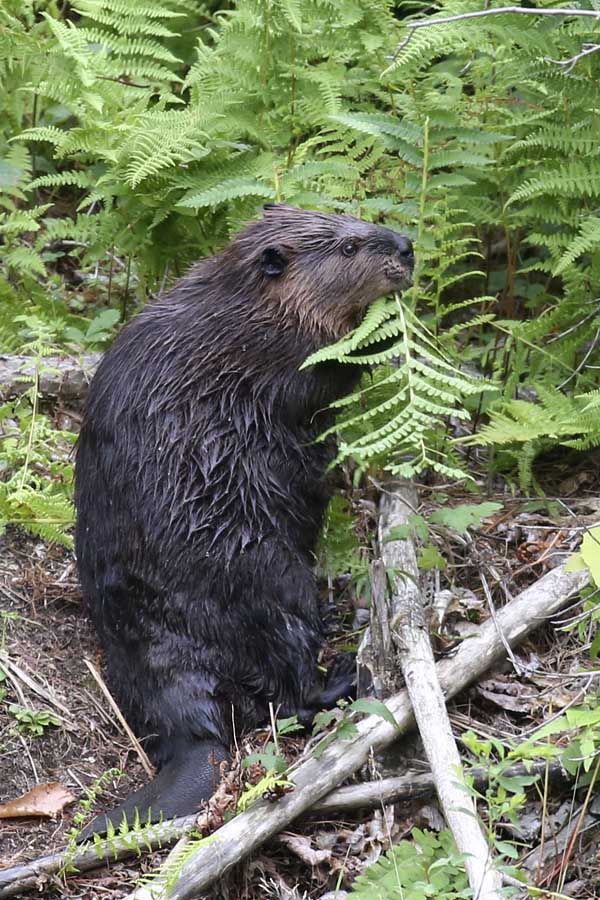 One associates Beavers with a fairly strict diet of bark and twigs. While their winter diet consists primarily of woody plants, they consume a variety of herbaceous and aquatic plants (as well as woody) during the spring, summer and fall months. Shrubs and trees make up roughly half the spring and autumn requirements, but as little as 10% of the summer diet when herbaceous plants such as sedges and aquatic plants become available.

Recent observation of a local active Beaver pond revealed that Interrupted Fern (Osmunda claytoniana), Jewelweed/Touch-Me-Not (Impatiens capensis) and grasses are high on the list of preferred foods of one Beaver family during the summer, although woody plants such as poplars (Populus spp.) and Paper Birch (Betula papyrifera) have also been consumed in fairly large quantities.   All too soon Beavers in the Northeast will be limited to the bark of branches they’ve stored under the ice. Until this time, they take advantage of the accessibility of more easily digested herbaceous plants. (Thanks to the Shepards and Demonts for photo op.)

Maidenhair Spleenwort Greening Up the Woods

Five species of spleenworts (genus Asplenium) can be found in New England. Most of these small, native, evergreen ferns are found growing among rocks or on cliff faces. The Greeks believed that a species of spleenwort was useful for treating diseases of the spleen. The genus name Asplenium is derived from the Greek word for spleen (splen).

Maidenhair Spleenwort (Asplenium trichomanes) is divided into two subspecies, one that grows in crevices of acidic rocks and one that grows on more basic (alkaline) rocks. It grows in tufts and has long (three to six inches), delicate fronds made up of short, round leaflets paired from the central dark reddish-brown stem (stipe and rachis). If in doubt as to whether or not a spleenwort is Maidenhair, examine the stipe and rachis with a hand lens; if there is a narrow wing running the length of the fern frond, it is A. trichomanes.