Gray Treefrogs are often heard but rarely seen, due both to their cryptic coloration as well as the fact that they are arboreal.  They tend to perch (grasping trees with their toes which bear large, adhesive, mucous-secreting disks at their tips) in vegetation surrounding swamps and ponds, where their robust, territorial and mating trilling can be heard (males call between 500-15,000 times per hour). To hear trilling Gray Treefrogs go to https://www.youtube.com/watch?v=CSkhM24Fi-k.

After choosing a mate and mating, Gray Treefrog females lay up to 2,000 eggs which hatch in 2-5 days.  For the next month or two the tadpoles breath with gills and consume vegetation.  Full-sized tadpoles are green or black with red or orange tails.  Towards the end of summer, the tadpoles begin their transformation into frogs, developing limbs and lungs, absorbing their tails and changing from a diet of plants to one of insects.

Adult Gray Treefrogs are mottled gray or green (depending on their surroundings, temperature, and humidity) and have an uncanny resemblance to lichen. Recently-metamorphosed young treefrogs such as the one pictured are a brilliant emerald green.  (Photo: young Gray Treefrog with adult Gray Treefrog inset) (Thanks to Brian Long for photo op.)

The eggs of Wood Frogs, the earliest species of frog to breed in the Northeast, are just hatching and tiny Wood Frog tadpoles can be found swimming about at this time of year. This Green Heron is devouring a tadpole, but it is anything but tiny – certainly not a Wood Frog tadpole. How can this be?

The answer is that the tadpole that the Green Heron caught did not hatch this spring – it hatched last summer. Unlike Wood Frogs and Spring Peepers that mature in roughly two months, Green Frogs and American Bullfrogs can take two or even three years to metamorphose into adult frogs. By their second summer they are of substantial size. The Green Heron has caught a Green Frog or Bullfrog tadpole that has overwintered and would probably have matured this summer.

Male Green Frogs are extremely territorial. During June, July and August they establish a series of territories, often claiming each one for less than one week before moving on.

The desirability of a given territory is of utmost importance – the better the quality (amount of vegetation) of your territory the more likely it is that a female will choose you to fertilize her eggs. The more time a male spends in a high quality territory the greater the number of mates he will acquire.

Considerable aggression is displayed against other males when an individual is claiming and maintaining a territory. When a competing male arrives, a wrestling match often ensues (see photo). 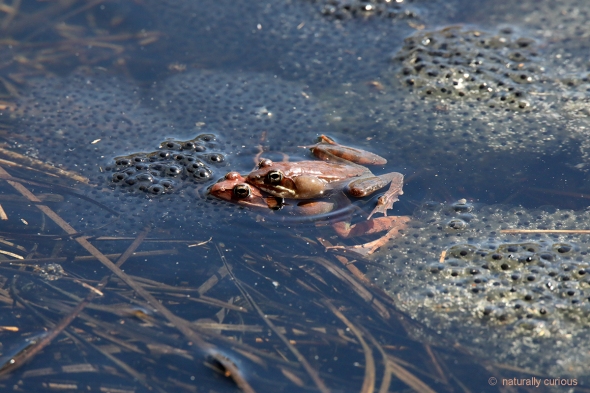 Wood Frogs have emerged from their hibernacula and migrated to their ancestral woodland breeding pools, or vernal pools, to sing (males), mate and lay eggs (females). A chorus of duck-like quacking reveals where these hidden temporary bodies of water are located. The male Wood Frog in this photograph is on top of a female, grasping her behind her front legs in a hold referred to as “amplexus.” They will remain in this position until she lays her eggs and he then fertilizes them externally. Note that even though he has attracted a female and is in the process of mating with her, the male is continuing to sing (one of his two vocal pouches is inflated on the near side of his body).

Every year in late July or August a young Spring Peeper crosses my path and I cannot resist photographing it. At this time of year they are roughly the size of a Japanese Beetle, and during early mornings and late afternoons can be found in shrubbery where they intermittently rest in the shade and feed on insects even smaller than themselves. If you live near a pond where it sounded like sleigh bells were ringing last spring, keep an eye out for these irresistible frogs that are no bigger than your tiny finger nail. 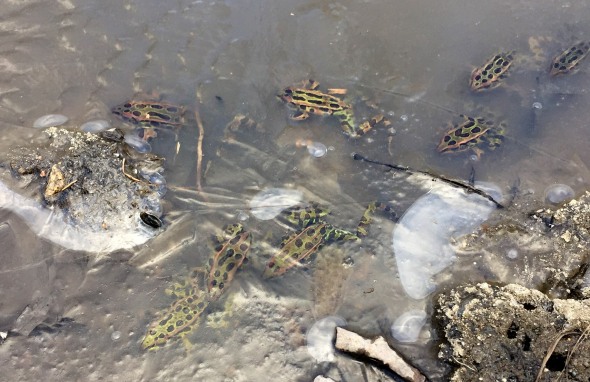 The migration of amphibians from the woodlands where they overwinter to their breeding pools in March is a familiar spring phenomenon to most. However, some of these amphibians engage in a fall migration as well. Amphibians (and reptiles) need to find a good overwintering spot, where they won’t freeze. In some cases, that might be a few feet upstream or into a seepage area, and in others it is a few hundred yards uphill. The extent of the migration and the species participating vary in different parts of the state.

In western Vermont, Jim Andrews, Director of the Vermont Reptile and Amphibian Atlas(http://vtherpatlas.org), has observed Blue-spotted and Four-toed Salamanders moving down into wetlands in the spring, staying close to the wetland for moisture and feeding during the summer, and then moving uphill back to wintering areas in the fall. On the other hand, he has found that most Spotted and Jefferson Salamanders, as well as Wood Frogs, move down in the spring to breed, and then head back uphill in stages soon after they are done breeding.

Eastern Red-backed Salamanders (pictured) migrate as needed during the summer to maintain their body moisture, and in the fall, search for an animal burrow or crevice to hibernate in. Migration often occurs at night, while it’s raining, so as to prevent their skin from drying out. (Amphibians need to have moist skin because a large portion of the frog’s “breathing” occurs via oxygen diffusing through the skin. Oxygen will not diffuse through a dry membrane.) After the very dry summer we’ve had, a large number of amphibians were observed taking advantage of the recent rain and migrating.