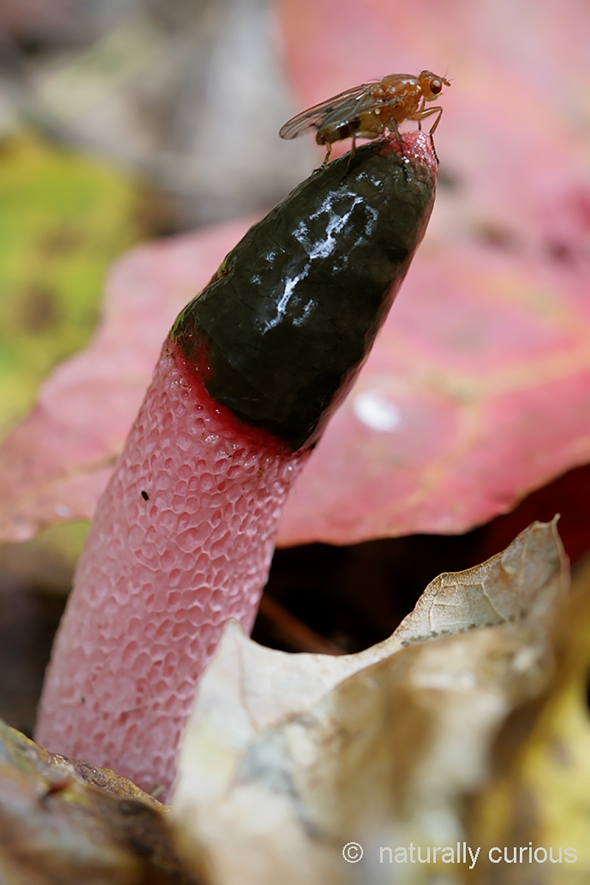 There are a group of fungi known as stinkhorns — aptly named, as their foul odor can be detected even by the human nose. All stinkhorns first appear as an “egg” which can be up to two inches high. When the eggs rupture, the appearance of the different species of fungi in this family (Phallaceae) can differ dramatically, but many have a phallic-like shape. At maturity, all stinkhorns produce an olive-green to olive-brown slimy substance that has a putrid smell (to humans), but is very appealing to many insects.  This slime is loaded with the fungi’s spores. Insects landing on a stinkhorn get their feet covered with the spore-laden slime while they are busy ingesting it.  Once the insects depart, the spores are dispersed far and wide.

Stinkhorns appear suddenly, and their growth can almost be observed, as they go from the egg stage to maturity with impressive speed. While these fungi are not poisonous, it is doubtful that having smelled them, anyone would desire to eat them.  (Photo:  Dog Stinkhorn aka Devil’s Dipstick, Mutinus caninus)

The observant eye may have spied what look like miniature bird nests filled with tiny eggs growing in gardens and wood chips this time of year.  They are a type of fungus that forms fruiting bodies that employ a “splash-cup dispersal” mechanism in order to disperse its spores.

The nests (peridia) serve as splash cups; when raindrops strike the nest, the eggs (peridioles) are projected into the air.  In some species, each peridiole is attached to the inner surface of the cup by a slender, hollow stalk which contains an inner, coiled, threadlike “funicular cord.” The fragile outer layer of the stalk is easily ruptured, thus releasing the inner, coiled cord. When wet, the cord elongates greatly and may reach a length of 6-8 inches. The base (hapteron) of this elongated cord is very sticky and adheres readily to solid objects after it is released from the cup. Like a wad of glue, the sticky cord base strikes a solid object, such as a nearby plant, adheres to a branch, and as the peridiole continues in flight the cord expands to its full length. Then the peridiole winds around the branch where the hapteron has become attached and is suspended in the air. Upon drying, the peridiole splits open, releasing its spores. 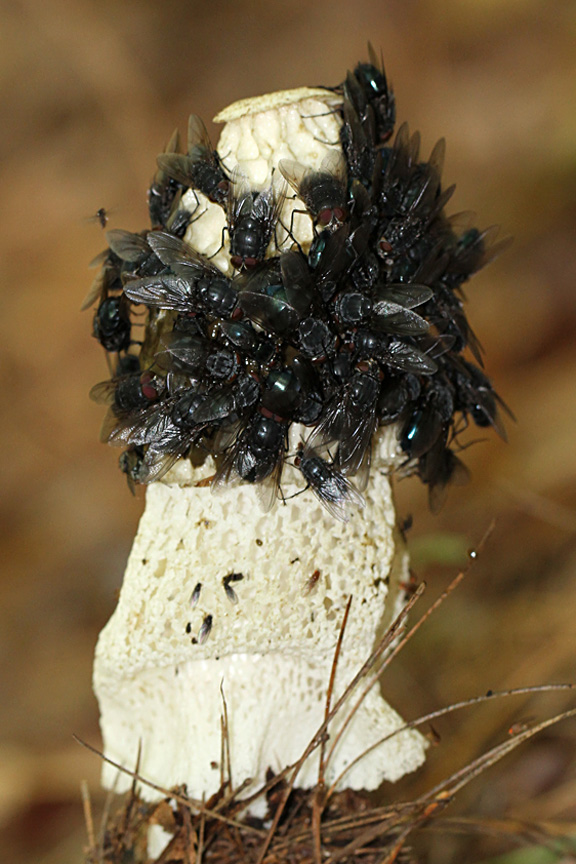 If you should detect an odor reminiscent of a decomposing carcass, it may well come from the spores of Netted Stinkhorn (Dictyophora duplicata) – the slimy, olive-green matter on the head, or top portion, of the fungus. When mature, the spores have a fetid odor which successfully lures insects, especially flies, to the fruiting body of this fungus. Some of the spores stick to the legs and mouth parts of the flies. Eventually the flies land on some real rotting material and the spores are transferred to a substrate they can grow on. Although it’s not too discernible in this photograph, Netted Stinkhorns derive their name from a fishnet-like veil, or skirt, below the head of the fungus.

Boletes are fleshy terrestrial mushrooms that have sponge-like tubes, not gills, as most mushrooms have, under their caps. (Polypores also have tubes, but are tough and leathery and usually grow on wood.) Spores develop on basidia (club-shaped, spore-bearing structures) which line the inner surfaces of the tubes. Because the basidia are vertically arranged, the spores, when mature, drop down and disperse into the air.

The majority of bolete species are edible, but there are two reasons not to harvest them unless you are with an expert. One reason being that there are some poisonous bolete species. The second reason is that because they are large and fleshy, larvae can often be found inhabiting them, as well as parasites.

The woods are filled with all kinds of plants – herbaceous and woody, flowering and non-flowering. Each plant appears to be independent of all others, but this is an illusion. In fact, most of the plants in a forest are physically connected to one another. How and why this is so is a little known fact.

Fungal threads called hyphae (the subterranean body of a fungus that we don’t usually see) run throughout the soil. Each one is ten times finer than a plant’s root hair. While some are digesting dead organic matter, others are forming a relationship with photosynthetic plants. This mutually beneficial relationship between fungi and plants is referred to as mycorrhizal.

The very fine fungal threads are capable of penetrating plant cells, allowing the fungus to receive sugars that the photosynthetic plant has manufactured. At the same time, the fungus provides the plant with minerals (especially phosphates) it has garnered from the soil. Nearly all plants have mycorrhizal fungi wrapped in or around their roots, and many of these plants cannot live without their fungal partners. The real work of a plant’s roots may well be to serve as the connector to this network of fungal hyphae that exists in the soil. (photo: Eastern White Pine,Pinus strobus) 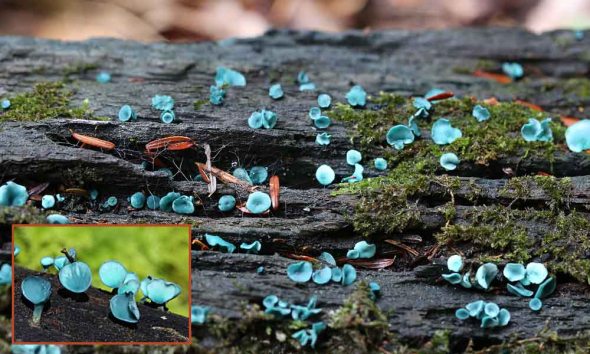 Sac fungi, or ascomycetes, are a division of fungi, most of which possess sacs, or asci, in which spores are produced. The relatively common blue-green cup fungi, Chlorociboria aeruginascens and its close relative, Chlorociboria aeruginosa, are in this group and are referred to as Green Stain Fungi. (They differ microscopically by the size of their spores.) Most of the time you do not see the actual fruiting bodies of these fungi (see photo). More often you come across the brilliantly blue-green stained wood (these fungi grow on the rotting logs or barkless wood of poplar, aspen, ash and especially oak) for which these fungi are responsible. Woodworkers call this wood “green rot” or “green stain.” 14th and 15th century Italian Renaissance woodworkers used Chlorociboria-infected wood to provide the green colors in their intricate wood inlays. The blue-green discoloration is caused by the production of the pigment xylindein, which can inhibit plant germination and has been tested as an algaecide. Xylindein may make wood less appealing to termites, and has been studied for its cancer-fighting properties.

Northern Tooth Fungus, Climacodon septentrionale, is an unusual combination of both a shelf (also called bracket) fungus as well as a toothed fungus. Typically a shelf fungus produces spores inside pores located on its underside. Northern Tooth Fungus, however, produces spores on pendant, spine- or tooth-like projections on its underside (see insert). This fungus usually has several tiers of “shelves” that grow in tight, thick layers, and change from white to light tan as they age.

Northern Tooth Fungus is a parasite of living trees, especially Sugar Maples, and it causes the central heartwood of the living tree to rot. The only sign that a maple has this fungal parasite is the appearance of these shelf-like fruiting bodies in late summer or fall. Often trees with this fungus become weak and are blown over by the wind. As with most shelf fungi, it is considered to be inedible. (Thanks to Jeannie Killam for photo op.)