There are two kinds of seed-producing plants, flowering and non-flowering. Flowering plants are called angiosperms; their seeds grow inside tissue that is part of the plants’ ovaries, more commonly called fruit. Non-flowering plants that produce seeds are called gymnosperms.  Conifers are gymnosperms; their seeds are “naked,” or unprotected by an ovary/fruit and are often located on the scales of a cone.

Some cones are male and some are female. The male cones produce pollen and the female cones produce ovules which, if fertilized, develop into seeds.  The pictured tiny, magenta cones are this year’s seed (female) cones of White Spruce, (Picea glauca) which, when the time is right, open their scales to allow wind-blown pollen to reach and fertilize their ovules.  The scales then close and will not open again until the seeds are fully mature.  At this point the scales open a second time in order to release the fully developed seeds which are dispersed primarily by the wind. 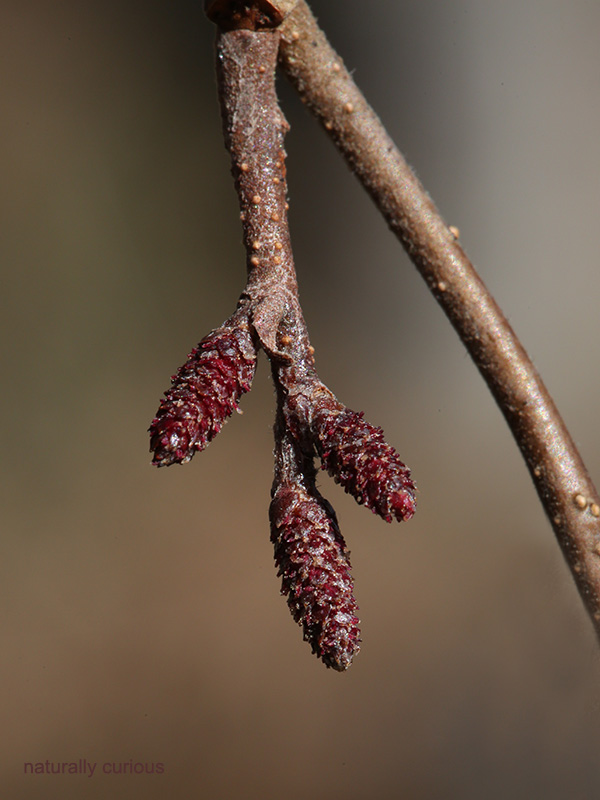 Obviously there’s no fooling Naturally Curious readers! The trick part of yesterday’s Mystery Photo question was that the pictured fruit were not, botanically speaking, “cones” — true cones are found only on conifers, which Speckled Alder (Alnus incana) is not. The resemblance of Speckled Alder fruit to cones is marked (which is why they are referred to as “cones”) and there are many similarities between the two. They are both woody, contain seeds and develop from catkins (flowering spikes). However, the nature of their respective seeds is quite different. Angiosperms, or flowering plants such as Speckled Alder, produce seeds that are enclosed within a covering (the ovary), whereas gymnosperms (conifers) have un-enclosed or “naked” seeds. Alder “cones” open to release seeds in a manner similar to many conifer cones and, like most cones, do not disintegrate immediately after maturity. (Photo: female flowers/catkins of Speckled Alder which, if fertilized, will develop into “cones.”) 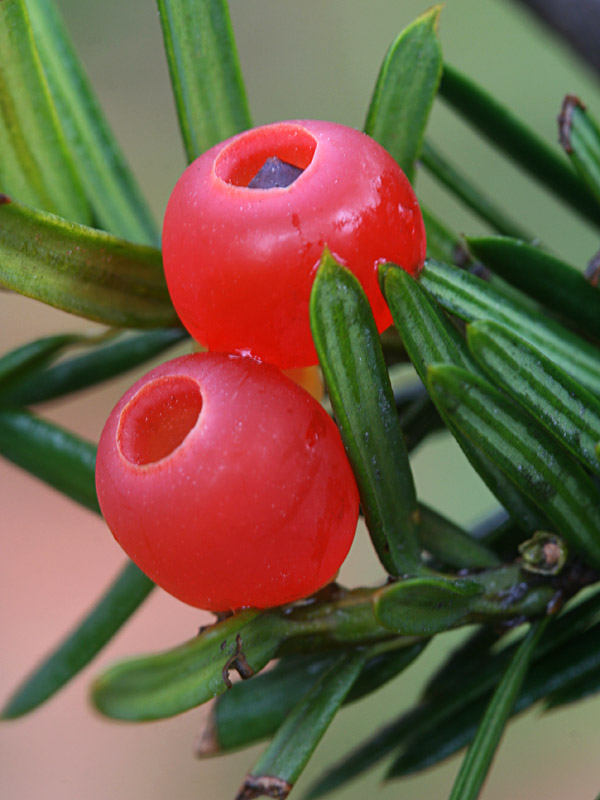 Being a gymnosperm (its seeds are not enclosed in an ovary), American Yew, Taxus canadensis, lacks true flowers or fruits and possesses separate male and female (seed) cones. Each male cone produces up to 100 pollen sacs or more. The modified female cones do not resemble the typical woody cones of evergreens. Yews are the only conifers that produce seed cones that consist of a fleshy (and mucilaginous), scarlet, cup-shaped structure called an aril, each of which holds one seed. The seeds (not the aril) are poisonous to humans, but thrushes, waxwings and other birds consume them and aid in their dispersal.