The Woodchuck, or Groundhog, is one lucky creature, considering past practices. The observation of “Groundhog Day” originated in the mid-1800’s, and by the late 1800’s and early 1900’s the celebration consisted of feasting on this rodent. A formalized hunt took place and participants then dined on Groundhog (which purportedly tastes like a cross between chicken and pork) and drank Groundhog punch. Since then, the Groundhog has evolved into a forecaster of weather, rather than a meal.

While New England Woodchucks are curled up in their hibernacula,  Punxsutawney Phil is busy seeing if he can see his shadow today (in which case we’re in for six more weeks of winter) or whether cloudy skies will prevent that from happening and spring is right around the corner. I’d bet on the former. 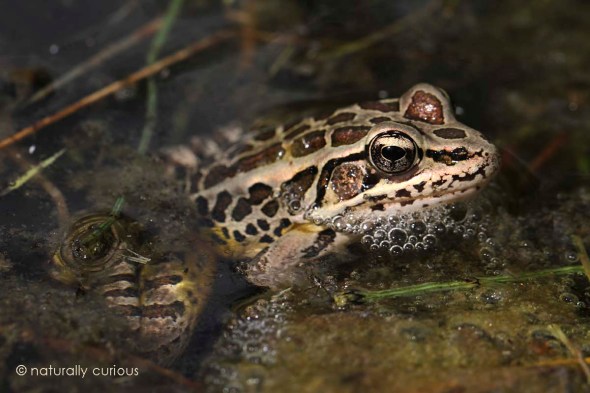 Pickerel Frogs emerge early in the spring from their muddy, pond bottom hibernacula, and mate in April and May in the Northeast. As part of the mating ritual, males call to attract females, with the calls resonating inside their internal vocal sacs located between their tympanum (ear drum) and foreleg (unlike Spring Peepers and American Toads, whose vocal sacs are located directly under their mouths).

These low-pitched calls resemble short “snores.” Occasionally Pickerel Frogs call from under water, but even when they are above water, their calls do not carry very far, frequently making it difficult for human ears to hear them.  Their call is similar to that of the Leopard Frog’s but lacks the short grunts of a full Leopard Frog call.  You can compare these two calls (and several others) by going to http://langelliott.com/calls-of-frogs-and-toads-of-the-northeast/ (Sound recording © Lang Elliott – langelliott.com)

Big Brown Bats, one of the most widespread mammals of North America, are one of the last species of bat to be seen flying in the fall. A relatively hardy species, the Big Brown Bat can tolerate conditions that other bats can’t. However, once cold weather arrives in the late fall and the nighttime temperatures dip down into the 30’s, they go into hibernation.

Both the Big Brown Bat and the endangered Little Brown Bat are considered “house bats,” because they are the most common bats found in houses in both summer and winter. During October, November and December, Big Brown Bats seek out caves, buildings and mines in which to hibernate. Some may migrate short distances to find an appropriate location for hibernating, but many find hibernacula close to their summer residence. Individuals often become active for brief periods during the winter months, sometimes even changing hibernation sites. Big Brown Bats can live up to 18-20 years in the wild but, unfortunately, most Big Brown Bats die during their first winter because they did not store enough fat to survive through their entire hibernation period.