Those of us who live in northern New England are enjoying being able to spot the largest butterfly in North America living among us.  With a 5 ½” – 7 ½” wingspread, the Giant Swallowtail’s (Papilio cresphontes) common name is very apt.  This butterfly has experienced dramatic range expansion in the last decade or so, as it was formerly found only as far north as the mid-Atlantic.  Now it is a regular New England inhabitant, primarily due to increasingly warm temperatures, and a common visitor to flower gardens at this time of year.

The larval stage of the Giant Swallowtail is as impressive, or more so, as the adult butterfly. Its defense mechanisms include resemblance to a bird dropping and a forked appendage that emits toxic chemicals (see https://naturallycuriouswithmaryholland.wordpress.com/2012/09/08/giant-swallowtail-caterpillar-defenses/).

It’s not every day that I discover a species I’ve never seen before, but when it comes to insects, it happens regularly.  Rarely, however, are they as interesting as the Case-bearing Leaf Beetle I observed on a blackberry leaf recently.  An oval, brown, stationary case about ¼” long was at a 45° angle to the leaf it appeared to be attached to it.  Upon closer inspection and with a bit of probing, a head and six legs appeared at the leaf end of the case, and the case began to move.

How its case was created is as, or more, interesting than the beetle itself.  The adult female Case-bearing Leaf Beetle lays an egg and wraps it with her fecal material as she turns the egg, until it is completely enclosed.  Once hardened, the feces create a protective case for both the egg and eventually the larva.  When the egg hatches, the larva opens one end of the case, extends its head and legs, flips the case over its back and crawls away.  As the larva eats and grows, it adds its own fecal material to the case in order to enlarge it.  Eventually the larva reseals the case, pupates and then emerges as an adult Case-bearing Leaf Beetle.  If it’s a female it then prepares to mate, lay eggs, and recycle its waste. 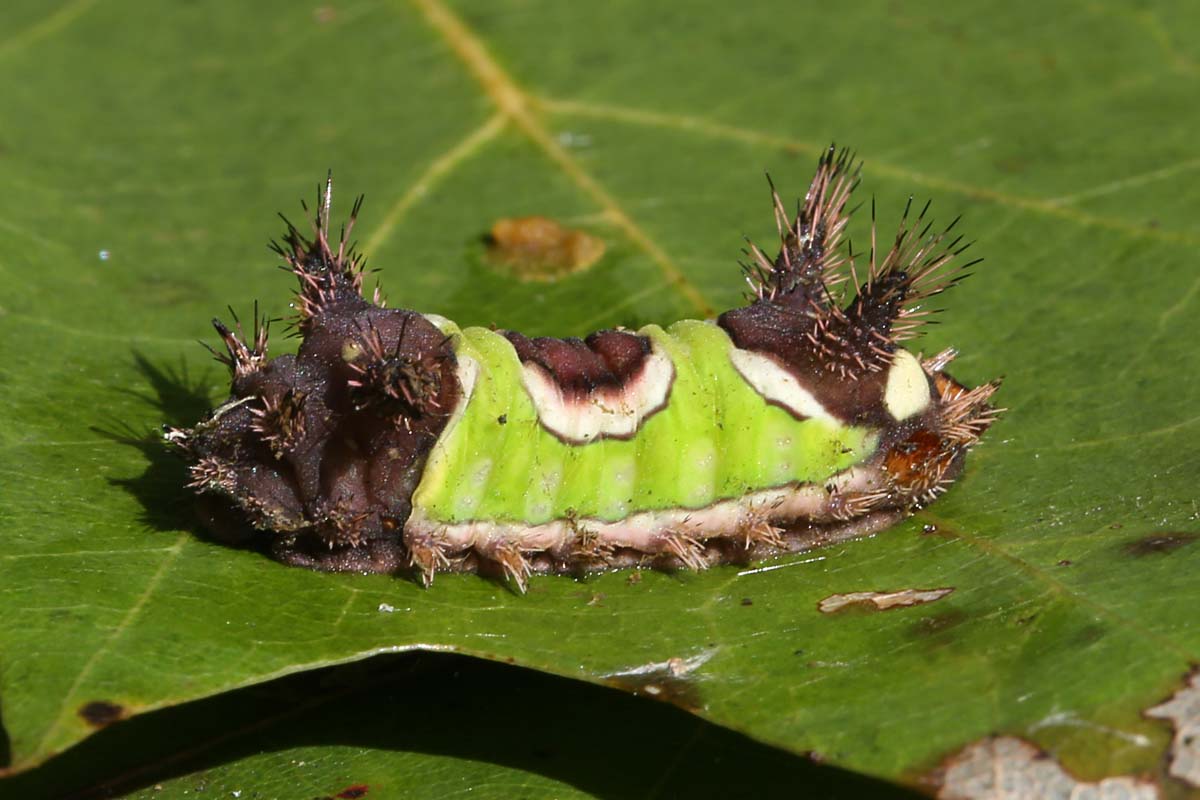 There is a group of moths (family Limacodidae) which are known as “slug caterpillar moths” due to the manner in which they travel during their larval stage, secreting a semi-fluid silk from their ventral pores as they move. These caterpillars come in all sizes and shapes. Among them is the Saddleback Caterpillar, which is much more colorful than the brown adult moth it eventually turns into. Saddleback Caterpillars are best known for their stinging (urticating) spines. Reputedly far worse than that of a bee, the sting of the Saddleback Caterpillar may be the most potent of any North American caterpillar. The larva’s bright colors serve to warn predators of its toxicity. Soon these caterpillars will be spinning cocoons (which can contain spines, as well) in which they will pupate until emerging as moths next spring. (Thanks to Rick Palumbo for photo op.)