The Monarchs’ migration north has begun! We are not the only part of the world that is experiencing unusually high temperatures — there has been a heat wave in Mexico this spring where the Monarchs overwinter, and it has them on the move, leaving their sanctuaries and beginning the more than 2,000 mile journey to New England.

This overwintering generation of Monarchs lays eggs in northern Mexico and southern U.S. and then dies.  When their eggs hatch and develop into adults, usually by late April to early June, they continue the journey north that their parents began, laying eggs along the way.  They begin to arrive in northern U. S. and southern Canada in late May.

To follow their progress northward, go to Journey North’s site, https://maps.journeynorth.org/map/?year=2020&map=monarch-adult-first.  Although we probably won’t see any Monarchs in New England until the end of May at the earliest, it’s fun to be able to see exactly how far they have gotten as spring progresses.  Journey North citizen scientists also monitor mammals, amphibians and birds.  To participate in their research or to see their observations go to https://journeynorth.org/. 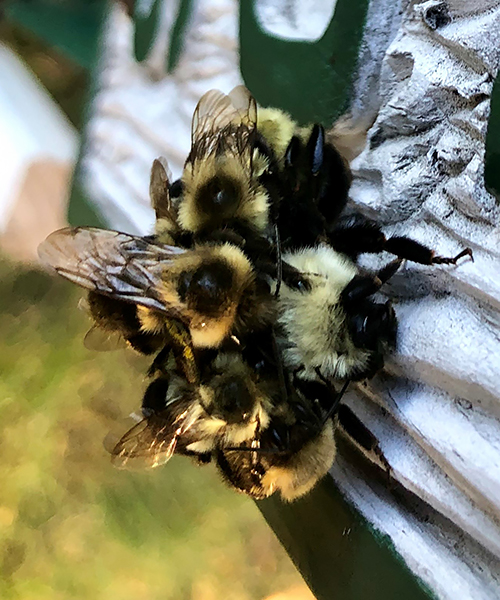 The adult male bumblebee has only one function in life and that is to mate.  However, research shows that only one out of seven males are successful in this endeavor.  When mating does take place, it is more complex than one might imagine.

In most species, the male bumblebees fly in a circuit depositing a queen-attracting scent (pheromone) from a gland in their head onto vegetation and prominent structures such as trees and rocks.  This usually takes place in the morning, and if it rains, the scent is replaced.  The males then patrol the area, with each species of bee flying at a specific height. Once a (virgin) queen has been attracted, mating takes place on the ground or vegetation, and lasts anywhere from 10 to 80 minutes.  After the male’s sperm has been deposited he inserts a genital plug in the queen which, when hardened, prevents the sperm of other males from entering her for up to three days.  (Photo by Heather Thompson: queen bumblebee with several smaller male suitors) 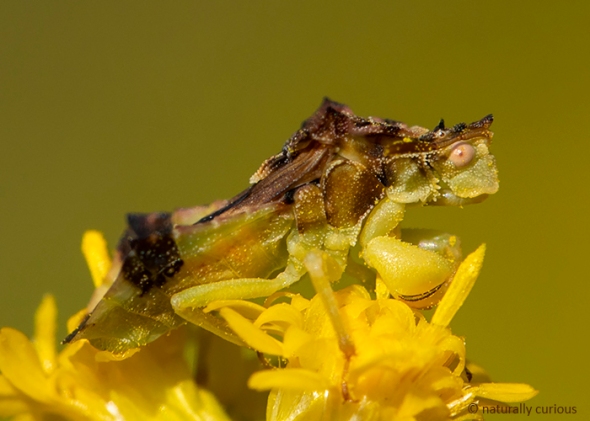 Thanks to Pat Nelson’s sharp eyes, I realized I had mislabeled the bug in yesterday’s blog.  It was an Ambush Bug, not an Assassin Bug.  While both are predators and in the same family (Reduviidae), Assassin Bugs are usually dark colored and have long, narrow heads compared to Ambush Bugs.  Ambush Bugs are usually quite stout and typically have bright colors such as yellow, red or orange.  They also have thickened front pincer-like legs with teeth-like structures that hold the prey while it is being consumed.  Although small (usually less than ½ inch), an Ambush Bug’s prey may be as large as a bumblebee, wasp or butterfly.

Drama In The Goldenrod Patch

At this time of year when most flowers have gone by, Canada Goldenrod (Solidago canadensis) is a primary source of pollen and nectar for bees, beetles, butterflies, flies and many other insects. Consequently, goldenrod flowers are a popular place for insect-eating predators to linger.

Recently I spied an Ambush Bug that had captured a fly and had its proboscis inserted into it, contentedly sucking away the fly’s innards while I photographed it.  Unbeknownst to me or the Ambush Bug, another predator, a Bald-faced Hornet, had spied the bug with its prey. Although adult hornets consume liquids, usually sugars like the juice of fruits or nectar, their larvae are raised on a diet of insects, so adults are constantly looking for prey. Suddenly, out of nowhere, the hornet flew in, tussled with the Ambush Bug and flew off with the fly in its mandibles, landing on a nearby branch with the object of its thievery.

A Bald-faced Hornet colony begins in the spring when a queen emerges from winter hibernation. The queen builds a small nest, creates a few brood cells within the nest, deposits eggs in them and feeds the larvae when they hatch.  These larvae are female workers — they will continue the nest building, food collection, feeding the larvae and protecting the nest while the queen concentrates on laying eggs.

During the summer the colony (and size of the nest) grows until there are between 100 to 400 workers. Toward the end of the summer the queen lays two special types of eggs. The first will be, like the workers’ eggs, fertilized eggs that will develop into females, but these females will be fertile (and develop into queens). The second group of eggs will be unfertilized eggs. These eggs will develop into fertile males. The maturation and emergence of the new queens and the fertile males marks the end of the functioning of the colony. At this point the workers are not replaced and die out. The ruling queen, having served her purpose, also dies. The newly-emerged adults (queens and fertilized males) leave the nest, mate, and the fertilized queens overwinter and begin their colony cycle all over again in the following spring.  Some small nests complete their cycle by mid-September, while some large nests are still going strong until the cold kills the larvae in late November.

There are four species of clearwing (also referred to as hummingbird) moths in North America. The most familiar ones are the Snowberry Clearwing (Hemaris diffinis) and the Hummingbird Clearwing (Hemaris thysbe).  These day-flying moths fly and move like hummingbirds (hovering near flowers while drinking nectar) and the males have a flared “tail” like that of a hovering hummingbird.  It is also very easy to mistake one for a bumble bee.  Scales cover the wings of butterflies and moths, but clearwing moths lose many of these scales and thus have partially transparent (“clear”) wings.

Like most moths, clearwing moths have a very long tongue (can be twice as long as their body) which they carry rolled under their heads and that they use to reach the nectar of long-necked flowers.  They are attracted to the flowers of phlox, beebalm, honeysuckle and swamp milkweed (pictured), among others. If you approach a clearwing moth as it hovers, you may detect the humming sound that they make with their wings.