Because yellowjackets do not produce or store honey one might wonder why striped skunks, raccoons and black bears frequently dig up their underground nests.  It is the young yellowjackets (larvae), not honey, that is so highly prized by these insect-eating predators.  At this time of year it is crucial for them, especially black bears who go for months without eating or drinking during hibernation, to consume enough protein to survive the winter.

Whereas adult yellowjackets consume sugary sources of food such as fruit and nectar, larvae feed on insects, meat and fish masticated by the adult workers that feed them. This makes the larvae a highly desirable, protein-rich source of food. (Yellowjacket larvae reciprocate the favor of being fed by secreting a sugary material that the adults eat.)

Three to five thousand adult yellowjackets can inhabit a nest, along with ten to fifteen thousand larvae. Predators take advantage of this by raiding the nests before frost kills both the adults (except for fertilized young queens) and larvae in the fall.  Yellowjackets are most active during the day and return to their underground nest at night.  Thus, animals that raid them at night, such as raccoons, striped skunks and black bears, are usually very successful in obtaining a large meal.  Occasionally, as in this photo, the yellowjackets manage to drive off predators with their stings, leaving their nest intact, but more often than not the nest is destroyed and the inhabitants eaten.  (Thanks to Jody Crosby for photo op of yellowjacket nest (circled in red) dug up by a black bear – note size of rock unearthed.) 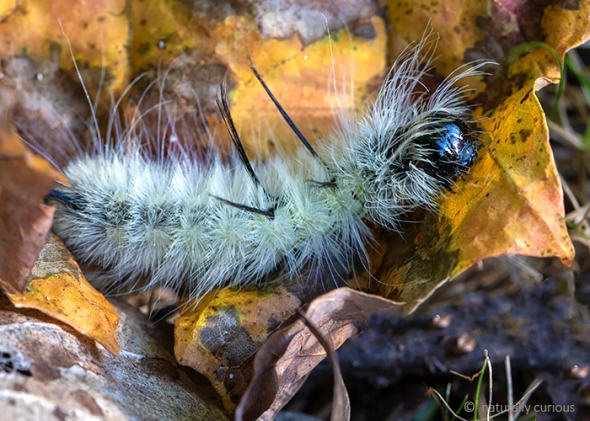 American Dagger Moth (Acronicta americana) caterpillars are present from June to October in the Northeast, but because of their size (up to 2 ½”) and their searching for a suitable site to pupate in over the winter, they are very evident right now.

American Dagger Moth caterpillars have lemon yellow (early instars) or white (late instars) setae, or hairs.  Their distinctive characteristic is the pattern of black tufts: two pairs of diverging tufts along the middle of the caterpillar and one thick black tuft at the end. As larvae they have a wide variety of host trees, including alders, ashes, birches, elms, hickories, maples, oaks, poplars, walnuts, and willows.

After locating a wintering site, these caterpillars will spin a cocoon in which they will spend the next several months as pupae.  Late next spring American Dagger Moths will emerge from their cocoons as two-inch-long brown moths.

If touched, these caterpillars can cause a mild allergic reaction (a rash) in some people who touch the them.

The larval stage of a butterfly or moth is spent doing little but eating.  Only as a caterpillar will these insects have chewing mouthparts, and they waste no time in using them. As they eat, caterpillars increase in size and their skin (exoskeleton) becomes tighter and tighter, as it doesn’t grow larger.  The caterpillar grows a new, larger exoskeleton underneath the outer skin and then sheds, or molts, the old one. Most caterpillars molt five times.  At first, the new exoskeleton is very soft and not very protective, but it soon hardens. The shed exoskeleton is often eaten before the caterpillar ingests more plant food.

The Monarch in the photograph is a very new 4th instar instar caterpillar (see antennae which haven’t hardened).  It has shed three times.  Its third exoskeleton (which it has just shed) is on the milkweed leaf behind the caterpillar. To see a real-time video of a Monarch molting go to   https://www.youtube.com/watch?v=EbHyq3RwtxI.

(Thanks to Otis Brown for his keen eye in finding this Monarch caterpillar before it ate its just-molted skin.  Also to Ba Rea ((www.basrelief.org) for her instar confirmation.)

Caterpillars, the larval stage of moths and butterflies, are very susceptible to predators (escaping quickly is not an option). Much of their energy in this stage is devoted to defense mechanisms to thwart would-be predators. A partial list of these defenses includes irritating bristles with detachable tips (Tussock Moths), toxic “breath” (Tobacco Hornworms, consumers of tomato plants, tobacco and other plants in the nightshade family, release toxic, bad-smelling nicotine), toxic bodies (Monarchs) and anti-coagulant venom (Giant Silkworm Moths).

Black Swallowtail (Papilio polyxenes) larvae defense mechanism strategies change as they develop. In early stages, or instars, they mimic bird droppings (not an appealing meal for most predators) and older larvae possess bright yellow-orange, horn-like organs behind the head known as osmeteria (see photo inset). When threatened, larvae rear up, extrude the osmeterium, and attempt to smear potential predators with a chemical repellent.

To learn much more about both moth and butterfly larvae, go to http://www.thecaterpillarlab.org.

Looking every bit like the Golden Alexander (Zizia aurea) flower buds on which they were laid, the pale yellow eggs of a Black Swallowtail (Papilio polyxenes) are next to impossible to find unless one is fortunate enough to see them in the act of being laid. Members of the parsley family (Golden Alexander, Wild Parsnip, Queen Anne’s Lace, Dill, Carrot) are host plants for most ravenous Black Swallowtail larvae, and thus that is where you will find their eggs. As they eat, the caterpillars absorb toxins from their host plant, which does not harm them but makes them distasteful to avian predators.

The Isabella Tiger Moth typically has two broods during the summer.  The caterpillars (Woolly Bears) in the first brood pupate and emerge as adult moths mid-summer.  The second brood overwinters as caterpillars and pupate in the spring.  The Woolly Bears we see crossing roads at this time of year are second-brood caterpillars in search of protective hibernation sites (hibernacula).

Old-timers predicted the severity of the coming winter by the relative lengths of the black and brown bands of the caterpillars when they became easy to observe in the fall – the longer the black sections and narrower the brown section, the harder a winter they were in for.  In fact, this may have had some validity, as brown hairs (setae) are added to the middle band every time the caterpillar molts. Therefore, the older the caterpillar, the wider the brown band.  If winter comes early, the caterpillar’s brown band would be relatively narrow due to the fact it didn’t have time to mature fully and develop a wider brown section before hibernating.

The adult stage of the Isabella Tiger Moth is often overlooked, due to the appeal of the larval stage.  This tan moth, with a wingspan of 1 ½ – 2 inches, has tiny black markings on its wings.  Male and female are sexually dimorphic and can be distinguished by the color of their hind wings.  Males have yellow-pale orange hind wings while the hind wings of females are rosy. (Photo:  Woolly Bear; photo inset: female Isabella Tiger Moth)