During the first two weeks of October, south winds prevented migrating Monarchs from making a lot of progress on their flight southward. Cold fronts were weak during this time, and wind blew from the north infrequently. On Oct.12 this persistent weather pattern broke, headwinds subsided and thousands of Monarchs were seen migrating through Texas. By Oct. 20 the first Monarchs entered Mexico and by the 23rd the first butterflies had reached their wintering grounds. Follow their progress as they continue to stream across northern Mexico, headed for their sanctuaries, at http://www.learner.org/jnorth/maps/monarch.html. 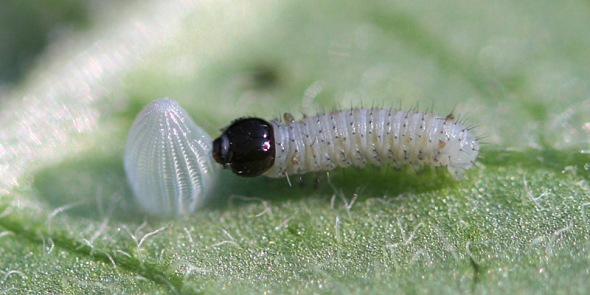 The Monarch eggs that are hatching now contain the larvae that will metamorphose into the butterflies that will migrate this fall to central Mexico. Unlike earlier-hatching generations that only live six to eight weeks, the Monarchs that result from late summer and early fall hatchings live six to nine months. Part of the reason for this difference in life span is that, unlike the earlier generations that mate soon after emerging from their chrysalides, late-hatching Monarchs postpone mating (reproductive diapause) until the end of winter, thereby conserving energy for their two to three thousand-mile, two-month migration. (Photo: monarch larva’s first meal – its eggshell.)

Female milkweed tussock moths lay their eggs in masses on the underside of milkweed and dogbane leaves, which their larvae will eat. The hatching caterpillars are gray and hairy, but in no time they have developed the tufts of hairs that give them their name and make them resemble little mops. When still fairly young, the siblings stay together, skeletonizing the leaves they consume, leaving only the strongest veins that contain sticky latex. As they mature, the caterpillars tend to wander, and it’s unusual to find large groups of them on a single leaf. At this point they often cut through a vein in order to prevent the latex from reaching the area of the leaf where they are feeding. (Older monarch caterpillars use this same tactic.) Like monarchs, milkweed tussock moths, because they’ve consumed the cardiac glycosides contained in milkweed and dogbane leaves, are toxic to predators.