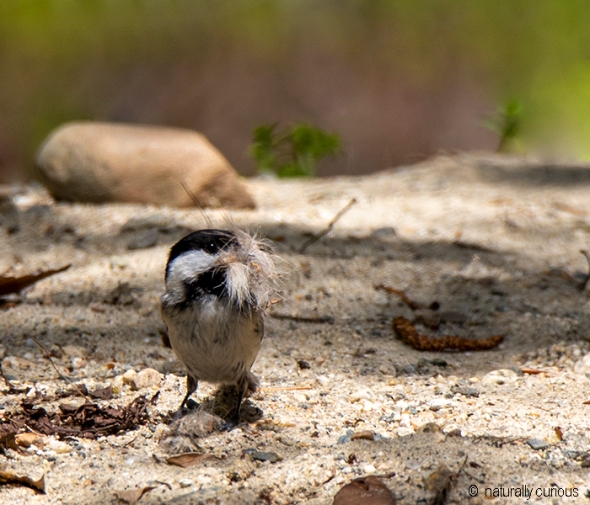 The time for nest-building has arrived for Black-capped Chickadees. They most often choose dead aspens and birches as nesting trees, and the punkier the wood the better so that the birds can easily excavate a cavity with their small beaks. While both male and female create the nest hole, the female builds the nest within the cavity by herself.

Most chickadee nests are used only once, and consist of coarse material such as moss for the foundation and finer, softer material such as the hair of rabbits or deer for the lining. The pictured chickadee is only a day or two away from laying eggs, for she is collecting shed fur from red fox kits (they grow three different coats on their way to maturity – gray, sand-colored and red) for the lining of her nest. She found a bonanza of nesting material on the dirt mound at the entrance of an active fox den, where the kits spend much of their time. (Thanks to Jim Block for photo op.)

Congratulations to Robyn Deveney and Chris Wings, the first Naturally Curious readers who accurately suggested the Mystery Photo depicted the tracks of an American Crow collecting nesting material. As I approached the pictured area, I flushed two black birds who were soon cawing and flying overhead, with a stick protruding from one of their beaks.

Crows are one of the earliest passerine, or perching, birds to engage in nest-building and egg-laying. Crows tend to build new nests each year, seldom reusing a nest from a previous year. In New England both members of a pair are busy collecting nesting material such as sticks, bark strips, weeds and mud, in March. They bring this material back to the nest site, which is typically a conifer, and construct a bulky nest usually in the crotch of the tree or on a horizontal branch. It takes anywhere from one to two weeks for crows to complete a nest and up to six days to lay 2 – 6 eggs. Incubation typically begins in early April.

Common Grackles are hard to miss and hard to mistake for any other bird, with their yellow eyes, iridescent bronze or purple plumage and long, keel-shaped tails. Most of the spring migrants have reached their breeding grounds, and courtship, mating and nest-building are underway.

Because grackles begin reproduction so early in the season, conifers are the nesting site of choice due to the cover they provide. Females tend to choose the actual site for a nest, and in so doing can be quite fickle, often abandoning partially constructed nests and selecting alternative sites. They earn this right, as they’re usually doing all the construction work, although males have been observed with nesting materials, helping to build and repair nests.

Look for their 6-8”-diameter, large bulky nests near water, agricultural fields or near human habitation. They are usually built four to twenty feet above the ground. If you find a bird on the nest, it will most likely be an incubating female (slightly less glossy than male) – males not only do not have a brood patch and do not participate in incubating the eggs or brooding the young, but roughly half of the males desert their mates during this time. Those that do remain participate in the feeding of their young nestlings.

Yesterday’s Mystery Photo showed evidence of a Blue Mud Dauber Wasp (Chalybion californicum) scraping the mud with its mandibles as well as the resulting ball of mud it had formed to use as building material for its nest.  You can get a hint in this photograph of the iridescent blue wings that give this wasp its common name.

Mud dauber is a common name for solitary wasps that make individual nests for their eggs/brood with mud. There are many species of mud daubers, but most are between one and one-and-a-half inches long, black or metallic blue, and typically have a narrowing, or “thread-waist,” between their thorax and abdomen.

Most species of mud daubers, after making a small (1/4” diameter) tube nest out of mud or refurbishing an old nest, leave to forage for spiders. Once a spider has been located, the wasp stings and paralyzes it, but does not kill it (so as to prolong decomposition), carries it back to its nest, and repeats this process over and over until the nest is stuffed with living prey. The wasp then lays an egg in this mass of spiders and seals the nest with mud. The egg hatches and the wasp larva consumes the spiders as it grows. After pupating in the fall, the adult wasp emerges in the spring, mates and the cycle continues.

The reason that the ball of mud that the Blue Mud Dauber had formed was not taken back to the nest site as building material appears to be a small rootlet which anchors the ball to the ground, preventing the wasp from removing it.

Although male Baltimore Orioles have been known to partake in nest building, usually it’s the female who selects the specific site within the male’s territory and builds the nest. Located at the tip of a slender branch, this pendulous nest provides its occupants with as much protection from predators as is possible.

The material with which the nest is started usually consists of flexible plant, animal or human-made fibers, and provides support. “Springy” fibers are then woven into the inner bowl and downy fibers are used to line the nest.  The oriole usually brings only a single fiber at each visit, and works it into the nest with a complex series of bill-weaving techniques. The nest is completed in roughly one week.

Construction material includes hair (especially horsehair), twine or string, wool, synthetic fibers (one oriole nest was made entirely of cellophane), various types of plant fibers including grasses, milkweed stems and grapevine bark, cottonwood or willow seed “cotton,” milkweed seed plumes and feathers. Females have been observed flying more than a quarter of a mile in search of construction material. (Photo:  Female Baltimore Oriole on her first day of nest-building)

YESTERDAY’S MYSTERY PHOTO: Once again, Naturally Curious readers outdid themselves with creative solutions to a Mystery Photo. If you want a thoroughly enjoyable 5 minutes of entertainment, read yesterday’s comments! I will let you know if this mystery is ever solved. 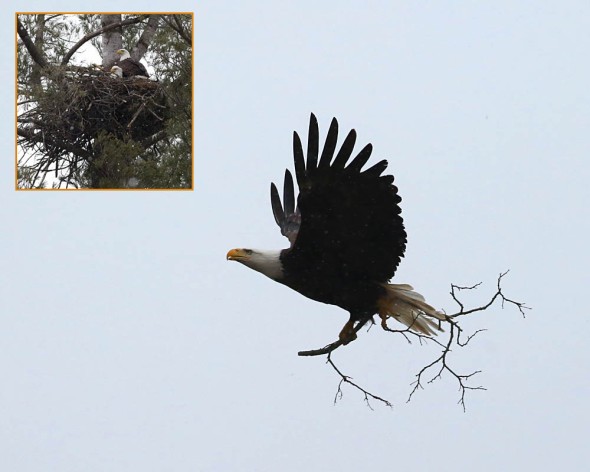 In the Northeast, Bald Eagles seek out the tallest trees around in which to build their nests. In certain locations in Alaska, coastal California and northern Canada where there are no trees, Bald Eagles will nest on the ground. When building a nest in a tree, eagles will usually build it in the top quarter of the tree, just below the crown, on limbs capable of supporting a large nest. Sticks from the ground are collected up to a mile away from the nest or are broken off of nearby trees. Additional materials are regularly added to the nest throughout the year, including daily additions during the breeding season (see photo).

Many live eagle cams can be found online (in Minnesota, one chick, one egg – http://mnbound.com/live-eagle-cam/ ; in Georgia, older nestlings: http://www.berry.edu/eaglecam/ ; in Pennsylvania, very young chicks: http://www.ustream.tv/decoraheagles ), giving the viewer a window into the incubation, birth and growth of these raptors. Depending on the location of the nest, one can see every stage of development, from eggs to hatchlings to all-but-fledged nestlings. In New England, eggs are soon to hatch, if they haven’t already. (Thanks to Marianne Blake for photo op.)

Great Horned Owls are said to have the widest range of nest sites of any bird in North or South America. Like other owls and falcons, this raptor does not build its own nest, but rather relies heavily on abandoned stick nests of diurnal birds of prey. Red-tailed Hawk nests are often usurped, as well as those of Bald Eagles, crows, ravens and herons. Nests may be lined with shreds of bark, leaves, downy feathers from the owl’s breast, fur of prey and trampled pellets. In addition to bird nests, Great Horned Owls also raise their one to four nestlings (usually two) in tree cavities and snags, on cliffs, in deserted buildings, in squirrel nests and even on the ground.

The female Great Horned Owl does all the incubating; the male delivers prey to her at intervals throughout the night. These early nesters have incubated eggs successfully when outside temperatures have been as low as -27°F. Hopefully warmer temperatures will welcome the newly hatched owlets in about a month. (photo: mostly hidden Great Horned Owl in Great Blue Heron nest)