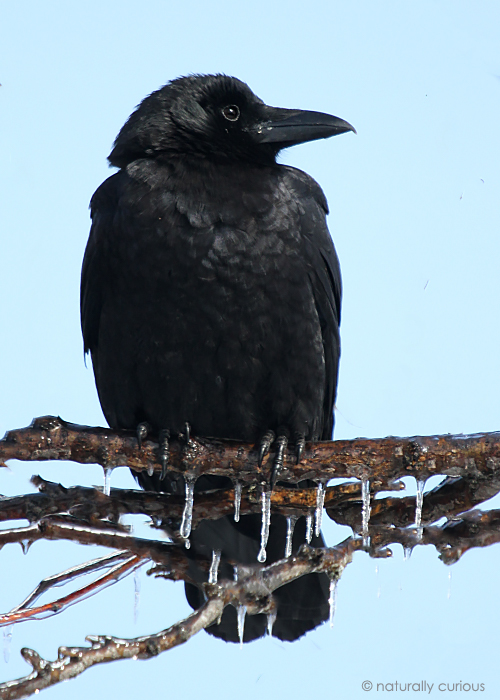 Congratulations to Robyn Deveney and Chris Wings, the first Naturally Curious readers who accurately suggested the Mystery Photo depicted the tracks of an American Crow collecting nesting material. As I approached the pictured area, I flushed two black birds who were soon cawing and flying overhead, with a stick protruding from one of their beaks.

Crows are one of the earliest passerine, or perching, birds to engage in nest-building and egg-laying. Crows tend to build new nests each year, seldom reusing a nest from a previous year. In New England both members of a pair are busy collecting nesting material such as sticks, bark strips, weeds and mud, in March. They bring this material back to the nest site, which is typically a conifer, and construct a bulky nest usually in the crotch of the tree or on a horizontal branch. It takes anywhere from one to two weeks for crows to complete a nest and up to six days to lay 2 – 6 eggs. Incubation typically begins in early April. 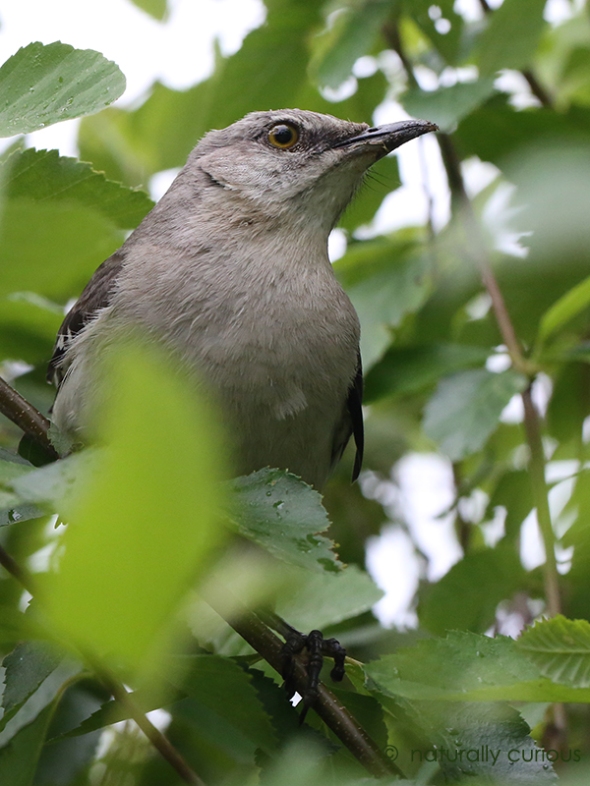 Besides being known for their vocal repertoire, Northern Mockingbirds are famous for pugnacious defense of their territory, nest, and young. Even more than most songbirds, Northern Mockingbirds aggressively stand guard over their nestlings as well as their young fledglings. Potential predators risk being mobbed and chased by nesting mockingbirds. While the female incubates, the male spends most of his time perched high on trees or rooftops, acting as a sentinel, and will chase away any animal (including humans) that approaches the nest. Northern Mockingbirds have also been known to join forces with other birds, including cardinals, thrashers and doves, to chase away potential nest predators.

Cedar Waxwings are strictly fruit eaters in the winter, expanding their diet to include insects during the warmer parts of the year. As their name implies, one often finds these birds in areas where there are a lot of cedars, as they’ve historically fed on cedar berries in winter. However, they increasingly rely on the fruit of mountain ash as well as apple, crabapple and hawthorn in the Northeast. Waxwings run the risk of intoxication and even death after eating fermented fruit such as the apples pictured. In recent years Cedar Waxwings have started feeding on the fruits of invasive honeysuckles, a habit which ornithologists feel might be responsible for a shift in waxwing distribution as well as regional population increases.

Pine Grosbeaks May Be A Rare Treat This Winter 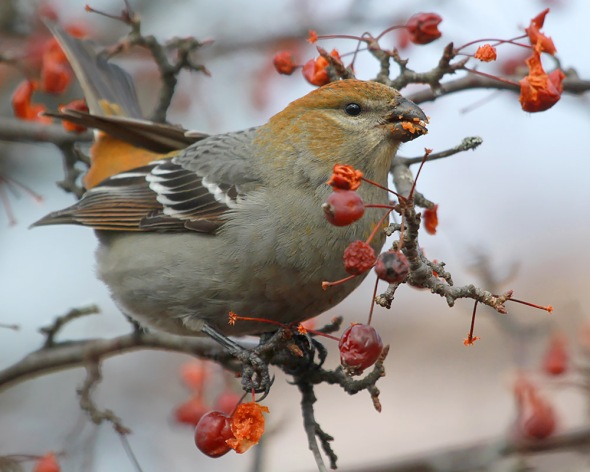 Several members of the Finch family of birds periodically fly south of their range into southern Canada and the northern U.S. during the winter in search of food. Pine Siskins, Common and Hoary Redpolls, American Goldfinches, Red and White-winged Crossbills, Purple Finches and both Evening and Pine Grosbeaks participate in these irruptions. Whether or not these species extend their range further south in any given year has much to do with their diet and its abundance or lack thereof on their wintering grounds . According to Ron Pittaway’s 2016-2017Finch Forecast (http://ebird.org/content/canada/news/ron-pittaways-winter-finch-forecast-2016-2017/ ), many of these birds will have a difficult time finding natural food sources this winter in Southern Ontario and the Northeast due to poor cone crops. Some may head north or west, where crops are much better.

Even if there were plenty of cones in the Northeast this year and many Canadian seed-eating finches were headed south of their normal range, we might not see large numbers of Pine Grosbeaks. This is due to the fact that the Pine Grosbeak’s diet is not limited to seeds, but includes buds, insects and fruit. Most of these birds are staying north this winter because of an excellent crop of Mountain-ash berries across the boreal forest. They eat these and other fruits by biting through and discarding the pulp and crushing the seed (which gives them a slightly unkempt look). We will see some — there have been several sightings of mostly small flocks of Pine Grosbeaks in New England in the past few weeks, lingering just long enough to consume what European Mountain-ash berries and crabapples they can find. But those of us who see them are very fortunate this year. (Photo: female Pine Grosbeak eating crabapples.)

Thank you to all of you who so kindly wished me well. I’m sure those wishes are what hav me bright-eyed and bushy-tailed once again! 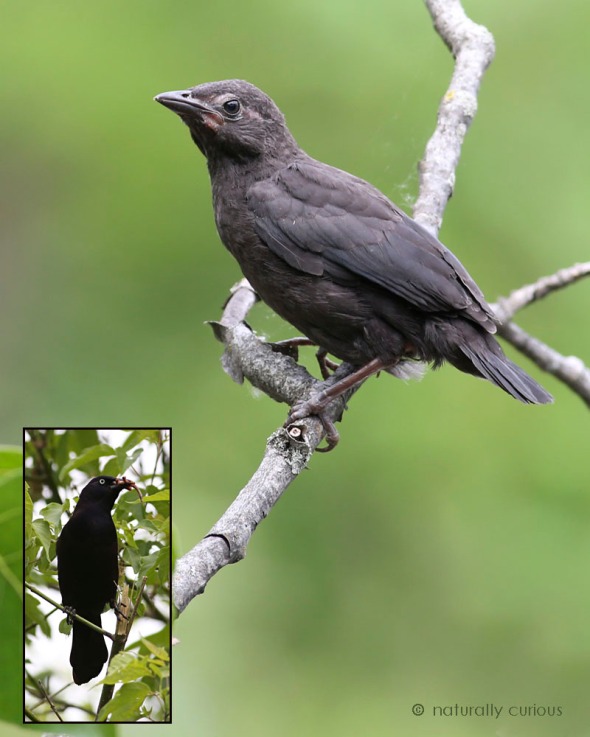 We are at the time of year where finding a young bird on the ground is not unusual, and many well-meaning people assume that if a bird can’t fly, it has been abandoned by its parents.  While some of these birds may be young that have fallen out of their nest, the fledglings of many species spend as many as two to five days on the ground before they can fly any distance.  While they are on the ground, the birds are cared for and protected by their parents and are taught vital life skills (finding food, identifying predators, flying).  To deprive such a fledgling of this developmental stage by removing it from its parents is to lessen its chances of survival, so it’s behooves us to be able to tell whether or not a young bird belongs out of the nest or not.

If the young bird is nearly naked or covered with down, not quill feathers, or its eyes haven’t opened, it is obviously a nestling.  If you can’t find its nest, a berry basket in the vicinity of where you found it, suspended from a branch, is a good facsimile.  Birds have a poor sense of smell and very strong parental instincts and more often than not continue to care for their young after a disturbance, although it may be a few hours before they do so.  If, after several hours, there is no sign of a parent, a local museum or nature center should be able to direct you to a nearby wildlife rehabilitator.

Fledgling birds, birds that have voluntarily left their nest, are usually fully feathered and have a very short (one inch or so) tail.  They are able to walk, hop and flap, and they may attempt short flights.  You may not see them, but a parent or two is nearby, keeping an eye on them, feeding them and teaching them how to survive on their own (see insert).   These are the birds that humans often mistakenly “rescue.”  If you find a fledgling, it should be left alone or, at the most, placed in a nearby shrub. If possible, keep people and pets away so the parents will continue to care for it until it can fly. (Photos:  fledgling and attending adult Common Grackle)

White-breasted Nuthatches maintain their pair bond throughout the year. In the spring, after mating, the female builds her nest, lining the tree cavity (natural or old woodpecker hole) with fur, bark, and lumps of dirt and then making a cup nest of grasses and bark inside the cavity.  She then lays her 5 – 9 eggs and incubates them for roughly two weeks, during which time the male brings her food.

After the eggs hatch, both parents provide their nestlings with food until they fledge.  Initially the female remains with the young, and the male brings food for both her and the nestlings.  His trips become more frequent during the first few days, starting at about 7 trips an hour and increasing to 13.  After three or four days the female also participates in food gathering, as much or more than the male.

The average day length in June is approximately 15 ½ hours.  At 26 deliveries/hour (13 per parent) that comes to a total of around 400 foraging trips a day for the majority of the 26 days before White-breasted Nuthatch nestlings fledge.  Impressive, especially when you consider that many of these trips involve not only delivering food but also removing the nestlings’ fecal sacs.

The Yellow-rumped Warbler (Setophaga coronata), formerly referred to as a Myrtle Warbler, is not hard to find during its migration due to the large numbers that pass through (as well as stay to breed in) central and northern New England.  These tiny jewels, also known as “butter-butts” because of their bright yellow rumps, are common and widespread.

Yellow-rumps are known for the diversity of their feeding techniques as well as their diet.  You are as likely to find them clinging to a tree, probing under bark or foliage gleaning for insects as you are finding them taking short bursts of flight off of a branch to snag an insect in the air.  These warblers are insect-eaters during the summer and consume a large amount of fruit during the winter.  Their ability to digest the waxes in bayberries makes them unique among warblers, and allows populations to winter along the coast as far north as Nova Scotia.

The presence of “pantaloons” on this image of a male Yellow-rumped Warbler may be due to courtship behavior.  Males hop from perch to perch, fluff out their feathers, raise their wings, erect their crown-feathers, and continuously chip in an effort to attract a female.

Should you choose to use your ears to locate this coniferous forest-loving warbler, its song can be heard at http://musicofnature.com/mary-holland/yellow-rumped-warbler/ . (Sound recording © Lang Elliott – langelliott.com)