Cedar Waxwings can be found in most of New England year-round. They are one of the few North American birds that specializes in eating fruit, particularly in the fall and winter. Unlike the Pine Grosbeak (see 1/16/19 post), which crushes the fruit and consumes only the seeds, Cedar Waxwings eat the whole fruit. If it has fermented, they will feel the effects and, like humans, become somewhat tipsy.

If you look carefully at a flock of Cedar Waxwings you may spot one that has an orange-tipped tail, rather than yellow. This has to do with the bird’s diet. Morrow’s Honeysuckle (Lonicera morrowii) was imported in the late 1800s for use as an ornamental, for wildlife food and cover as well as for soil erosion control, but it is now recognized as an invasive plant. Its fruit contains red pigment in addition to the normal yellow pigment found in honeysuckle berries. If a Cedar Waxwing happens to eat enough of the fruit of Morrow’s Honeysuckle at the time of feather formation (they molt between August and January), its tail feathers will have orange tips instead of the usual yellow. Cedar Waxwings with orange tail tips began appearing in northeastern U.S. and southeastern Canada in the 1960’s.

Wood Duck Ducklings Are Growing Up

One morning several weeks ago, broods of Wood Duck nestlings leaped out of their nest holes onto the ground or into the water beneath their nest trees. After leaving their nests, most traveled long distances (an average of 1 1/4 miles) with their mothers to rearing areas.

The earliest broods to hatch already have their juvenile (or “first basic”) plumage, which will remain through August. Male juvenile Wood Ducks can be distinguished from female juveniles by the two white finger-like projections that go up their cheeks and neck from their throat. The females lack these stripes but have a wider white patch around their eyes. The pictured male juvenile Wood Ducks are between eight and nine weeks old. Very soon their eyes will turn red and they will be able to fly.

For those New Englanders fortunate enough to live on the coast, Snowy Egrets are a welcome sight this time of year as they return from their wintering grounds to breed. Like most herons and egrets, they acquire plumes – long, wispy feathers – on their back, neck and head during the breeding season. (These plumes were highly sought after by the women’s hat trade in the late 1800’s and early 1900’s. They were valued at $32 per ounce, twice the price of gold at the time. Eventually laws were passed to protect the birds.)

Something slightly more subtle but equally as dramatic as ornate plumage highlights the appearance of these birds in the breeding season and that is a change in bill and feet coloration. Different species of herons and egrets exhibit different color changes. Snowy Egrets’ greenish-yellow feet turn a much richer orange-yellow hue during the breeding season, and the patch of bare skin at the base of their bill (lore) changes from a yellowish color to a pinkish/reddish color, only seen at this time of year. 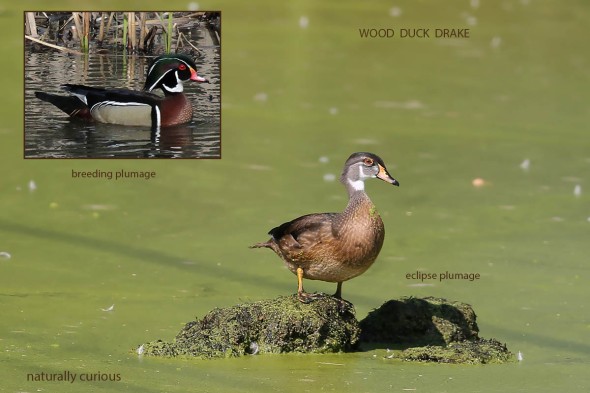 Most ducks shed their body feathers twice each year. Nearly all drakes lose their bright plumage after mating, and for a few weeks resemble females. This hen-like appearance is called the eclipse plumage and provides drakes with the ability to camouflage themselves. The necessity for waterfowl not to be seen by predators at this time is great, for this is when ducks undergo a “simultaneous” wing molt – losing all their wing feathers at the same time. It takes a month or so to replace these feathers, and during this time they are completely flightless. As soon as drakes can fly again in late summer, they begin a second molt and gradually develop their breeding plumage as fall progresses.

Naturally Curious is supported by donations. If you choose to contribute, you may go tohttp://www.naturallycuriouswithmaryholland.wordpress.com and click on the yellow “donate” button.

Male Blackburnian Warblers are relatively easy to identify by sight. They are the only North American warbler with an orange throat, and their intense orange breeding plumage is unmistakable. However, because they often forage for spiders and insects high in the canopy where they are hidden from sight, Blackburnians are often located by ear. Their singing peaks soon after they arrive on their breeding grounds. To hear the thin, high-pitched song unmated males sing, as well as mated males when they are near the females, go to http://langelliott.com/mary-holland/BLBUWA_5_songs_with_chips_MB.mp3. (Sound recording © Lang Elliott – langelliott.com & miracleofnature.org)

Most songbirds have one complete molt every year, in the late summer. Some, like the American goldfinch, have another (partial) molt in the spring. Last fall male goldfinches molted, replacing many of their bright yellow feathers with drab, greenish-gray feathers, so that they closely resemble females during the winter. Goldfinches start their partial molt in February, and in the next month or two, males will once again become bright yellow beacons. No-one can illustrate the subtle seasonal plumage changes of a male American goldfinch better than David Sibley: http://www.sibleyguides.com/2012/05/the-annual-plumage-cycle-of-a-male-american-goldfinch/ (Photo: male American goldfinch in March)