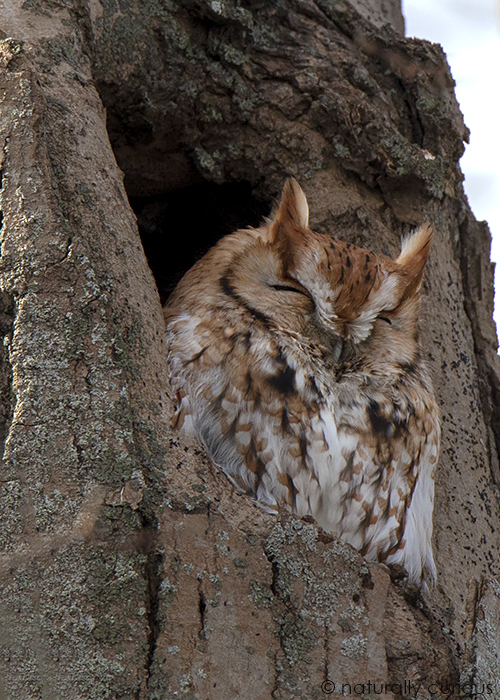 Tree cavities serve not only as nesting sites, but also as winter roosting sites for many species of birds, including Eastern Screech-Owls. Here they perch and soak up the sun’s warmth on cold winter days,with their eyes open just enough to be aware of any activity in the immediate area.

Perhaps the most common owl east of the Rocky Mountains, the Eastern Screech-Owl is best known for its two main calls, which don’t really resemble a screech but are more of a descending “whinny” and a monotone trill. Their vocal repertoire also includes various barks, hoots, squeals, and screeches — hence the common name. Both sexes call, with the female’s call a bit higher than a male. You can hear these calls by going to https://www.allaboutbirds.org/guide/Eastern_Screech-Owl/sounds.

Eastern Screech-Owls come in multiple forms (polymorphic): rufous, gray and a more rare brownish form. These different forms are not directly tied to age or gender, but vary with region and climate. Gray morph owls are prevalent in colder, drier, more coniferous habitats in the northern and western part of their range. Rufous Screech-Owls are most common in eastern and southerly regions and in humid, deciduous forests. (Thanks to Marc Beerman and Howard Muscott for photo op.)