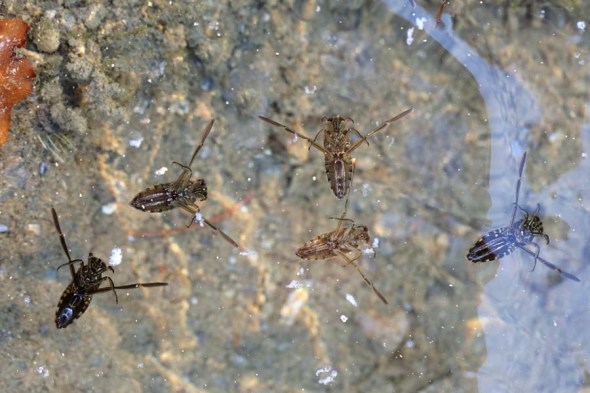 Backswimmers are insects classified as “true bugs” and belong to the order Hemiptera. Most Hemipterans are land dwelling, such as stink bugs and assassin bugs, but there are a few, such as water striders, water boatmen and backswimmers, that are aquatic. In the fall, when most insect hatches have ceased, backswimmers come into their own. While some hibernate at the bottom of ponds in winter, others remain active, sculling through the water with their oar-like hind legs that are covered with fine hairs, preying on all forms of life up to the size of a small fish. Thanks to bubbles of oxygen that they obtain from pockets of air just under the ice and carry around with them like mini aqua lungs, backswimmers can continue to stay below the surface of the water for several minutes. Like most aquatic insects, backswimmers supercool their bodies (produce antifreeze compounds called cryprotectants that allow their body fluid to go down to 26 to 19 degrees F. without freezing). Right now, when there’s a thin layer of ice on most ponds and no snow covering it, you might want to peer through the ice at the edge of the pond to see if you can locate any of these cold-hardy creatures. Just be sure you don’t fall in, as I did two seconds after this photograph was taken. My undying gratitude for those of you who have donated to Naturally Curious, as your support enabled me to replace both camera and lens!

(Part 2 of 3 Beaver posts)
Beavers repair and strengthen their pond’s dam much as they do their lodge in the fall. New sticks are added and mud is retrieved from the pond bottom just below the dam, making the water deeper there than in the rest of the pond. Beavers dive down, dig up a load of mud and carry it beneath their chin and front feet to the dam. They then use their front feet to push the mud on top of and in between the pieces of brush on the dam (see front foot prints in mud, insert A). Because beavers spend so much time reinforcing their dam, it is not unusual to find their 1 1/2 –inch long, fibrous scat (insert B) in the water right below the dam (they keep their lodge relatively clean by defecating only in water).

Young Spring Peepers Now The Size Of Your Baby Fingernail

It takes roughly two months for Spring Peeper tadpoles to metamorphose into adults, and unlike other frogs, they don’t complete this process in the water. Young Spring Peepers leave their ponds at an earlier stage of development than most frogs – they have four legs and lungs when they come out of the water, but most of them also still have a tail which is absorbed shortly after they become land dwellers. Adult Spring Peepers measure roughly ¾” (males) to 1 ½” (females) in length. As you can see in this photograph, this fully metamorphosed young Spring Peeper is hardly bigger than a Japanese Beetle, and it has completely lost its tail, so it was even smaller when it hopped out of the water!

Backswimmers are aquatic insects that seek out prey as large as tadpoles and small fish. They row around ponds with their fringed hind legs and grasp prey with their front pair of legs. The piercing mouthparts that they use to kill their prey are also capable of giving humans who handle them carelessly a nasty bite (they are also known as “water wasps” for this reason).

Because they spend most of their time on their back, their coloring is opposite that of most insects – backswimmers typically have a dark belly and a light-colored back, making them less conspicuous to predators (and prey) both above and beneath them. These tiny bugs can stay submerged for hours thanks to their ability to store air bubbles in two channels on their abdomen which are covered with inward-facing hairs. Backswimmers are often confused with Water Boatmen, which are not predaceous, do not bite, and swim “right side up.” Water Boatmen’s dark color and parallel lines on their backs help distinguish them from Backswimmers. 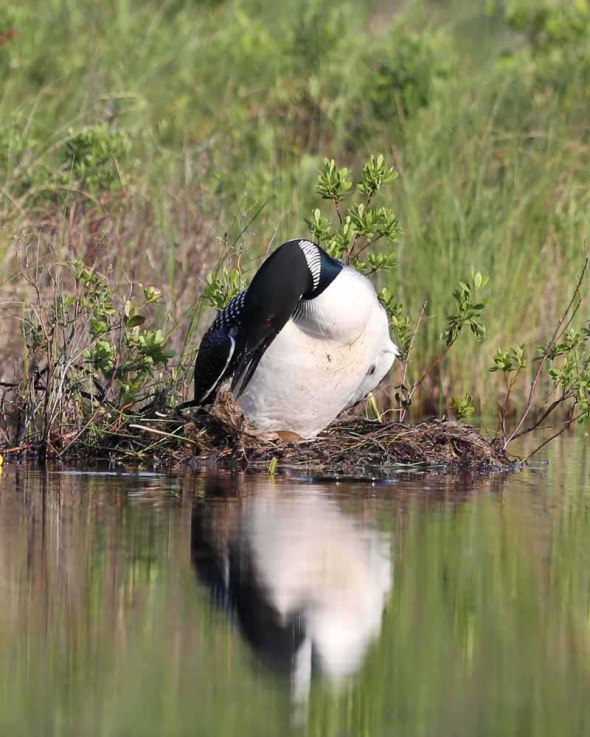 Generally speaking, Common Loons return to northern New England from their coastal wintering waters sometime in April or May. Males and females pair up after they arrive at their ponds, and several weeks later they breed and build a new nest or renovate an old one, with the male choosing the actual nest site. Successful nests sites are often reused from year to year, especially if the male returns. Protection from wind, waves and predators is paramount. Because their hind legs are positioned so far back on their body, loons are awkward walkers, at best. Thus, they usually build their nest adjacent to water so that they can easily slip onto and off of it. The nest is constructed during the day by both adults and is made of vegetation that the loons collect close to the nest. A loon often sits on the nest while collecting material, stretching its head down into the water in order to retrieve vegetation which it then places on the nest. Two eggs are laid, usually between mid-May and early June. After being incubated by both parents, the eggs hatch in roughly 28 days. As this photograph indicates (egg just visible below loon’s body), material continues to be added to the nest during incubation.

Sitting on top of the snow, still as a statue, a spring peeper gathers strength to make the long trek to open water, where, if it is a male, it will exercise its voice for the first time in many months. Like the gray treefrog and wood frog, spring peepers can freeze as solid as a rock for several months during hibernation and then, on a warm day, thaw out in a few hours and resume a normal, active life.  The formation of glucose and ice crystals that form outside of cells enable this phenomenon to occur.  Once hibernation has come to an end, peepers seek out wetlands, vernal pools and ponds to breed and lay eggs before they return to their home on the forest floor.