Winter Adaptations of the Ruffed Grouse

Ruffed Grouse have both behavioral (diving into the snow on cold nights) and physical strategies for dealing with the cold, snow and ice of New England winters.  Three of the physical changes that take place in the fall are evident by looking closely at a grouse’s legs, feet and beak. The feathers on its legs grow thicker and further down towards its feet, to provide better insulation.  Small comb-like growths of skin, called pectinations, develop along either side of each toe.  These increase the surface area of a grouse’s foot, and serve as snowshoes in deep snow.  They also help the grouse cling to icy branches while it quickly snips off poplar and other buds at either end of the day.  And on its beak, feathers expand downward to cover its nostrils, slowing the cold air and giving it a chance to warm up before it is inhaled by the grouse.

While Ruffed Grouse are plentiful throughout most of New England, one has to go to northern Vermont, New Hampshire or Maine to see its cousin, the Spruce Grouse.  Associated with boreal forests, this largely herbivorous bird feeds primarily on the needles of pine, spruce and fir (a small amount of animal matter is consumed in the summer as well as ground vegetation). Especially in the winter, a large volume of conifer browse is consumed in order to meet energy demands.

The grouse holds the needle between the tips of its mandibles and breaks it off by flicking its head.  This action, and the fact that Spruce Grouse feed exclusively on needles in the winter, leads to the wearing off of the tip of the bird’s upper mandible by spring.

If you are searching for a Spruce Grouse, you might want to concentrate in the middle of the crowns of trees, as this is where the birds tend to forage. Theories for this preference include the fact that needles in this location have higher nutritive value, branches provide sturdy support, and grouse can see approaching avian predators while remaining partially concealed. (Birds of North America, Cornell Lab of Ornithology). (Photo: male Spruce Grouse browsing on Tamarack needles and (inset) looking for grit on the ground.) 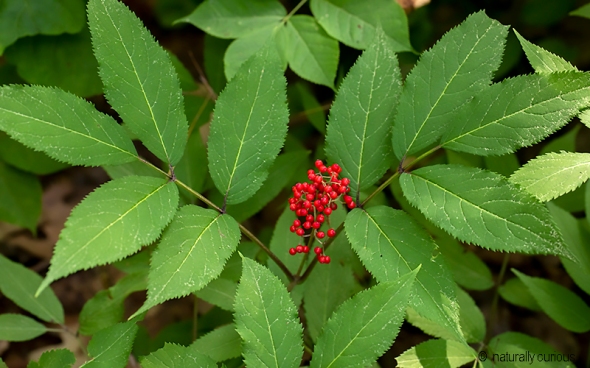 The pollinated and fertilized white flowers of Red Elderberry (Sambucus racemosa) have recently developed into the red fruit for which this plant is named. Many people are familiar with its relative, Common Elderberry (S. canadensis), which produces dark purple fruit that is used to make jams, jellies, pies and elderberry wine.  While Red Elderberry fruit can be used to make all of these, its raw berries are toxic.  Red Elderberry’s popularity is greatest with pollinators, birds and four-footed mammals.

The cyanide-producing toxins in its flowers, (raw) fruit, stems, bark, leaves and roots do not seem to discourage wildlife’s attraction to Red Elderberry.  The odor of its flowers, its nectar, and its highly nutritious pollen attract many ants, bees, wasps and flies.  At least 50 species of songbirds eat the bright red fruits, including red-eyed vireos, ruffed grouse, song sparrows, gray catbirds, brown thrashers, and thrushes. Squirrels, mice, raccoons, and black bears also eat the fruit. Porcupines, mice and snowshoe hares eat the buds and bark in winter. The foliage is usually avoided by herbivores, although white-tailed deer and moose browse on it occasionally.

Ruffed grouse, white-tailed deer and moose, all prey species and all plant eaters, share certain characteristics that have to do with food consumption and digestion.  They all tend to eat large quantities rather quickly in one spot, and then move to another, safer, spot to digest their food.  This technique minimizes the amount of time that they are likely to be out in the open and focused more on eating than on predators.  Eating quickly and storing the consumed food in a chamber and digesting it later at their leisure, under cover, makes a lot of sense.

All three animals have a multi-chambered stomach and microorganisms efficient at breaking down cellulose and extracting nutrients from plants.  After browsing on branches and buds, deer and moose seek shelter where they then regurgitate and chew their cud. Grouse do not linger over their meals – 20 minutes of foraging will sustain them all day. Leaves, buds and twigs are stored in their crop (a wide portion of the esophagus) until the grouse seeks shelter, where the food eventually reaches their gizzard.  Here, with the aid of gravel, it is ground up.

Every fall Ruffed Grouse (Bonasa umbellus) grow skin-like fringes called pectinations on either side of each toe. They serve as snowshoes, helping grouse stay on top of the snow when walking, as well as cling to icy branches while eating the buds of poplars and other trees in the winter. In the spring grouse shed these adaptive fringes.

Ornithological texts describe these growths as appearing in the fall, but usually do not specify exactly when they develop.  A recent look at a road-killed grouse’s foot (photo) showed that pectinations have begun to develop, but have not completed their growth. The pectinations shown here will double their length by the time snow flies. 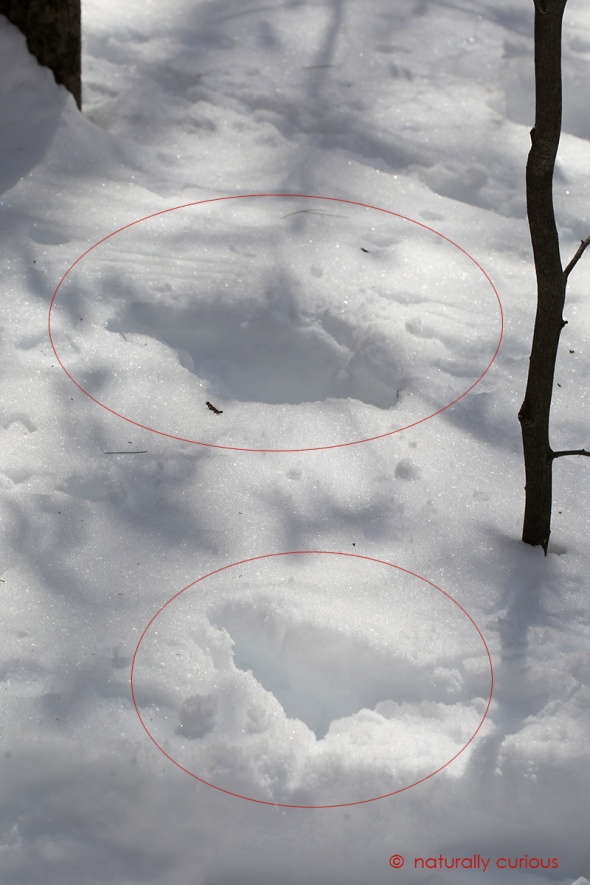 I recently had an experience while snowshoeing which I have always hoped to have, but which has escaped me during all these years of tromping through the woods. I was following the tracks of a Ruffed Grouse and all of a sudden it exploded out of the snow about two feet in front of me as it left its night time shelter. Now that we have over ten inches of fluffy snow, grouse can dive into the snow and spend the night in their self-made snow roosts. Finding a grouse’s snow roost is a relatively common experience; being startled by a grouse exiting one is not.

Diving head first into the snow, the grouse works its way anywhere from three to ten feet, creating a 4-inch-wide tunnel through the snow before it hollows out a small cavity and settles down for the night in its own little igloo. Up until recently, a hard crust prevented grouse from seeking shelter this winter in this manner. Had temperatures been very cold, many grouse would have suffered and even perished under these conditions. Fortunately, they can now roost in the snow, where temperatures are much warmer (as high as 32°F.), and rarely fall below 20°F. regardless of how cold it gets outside. Not only do these roosts hide the occupants from predators, but they provide an energy savings of 30 percent or more for grouse.

The Relationship Between Ruffed Grouse & Poplars In Winter

Poplar (also called Aspen) buds are an important winter food source for wildlife, but for none as much as the Ruffed Grouse. During the course of a year, a Ruffed Grouse may feed from as many as 100 species of plants, but in the winter, species of poplar are by far its most important food source. In fact, the relationship between grouse and poplars is such that the range of the Ruffed Grouse is practically identical to the range of Trembling (also known as Quaking) Aspen (Populus tremuloides) and Big-tooth Aspen (Populus grandidentata).

Poplars are dioecious – the male and female flowers grow on separate trees. Although grouse will settle for any poplar bud, it is the male flower buds of Trembling Aspen trees which they prefer, due to the buds’ high amounts of proteins, fats and minerals. (Female buds are smaller and have less nutrients, oddly enough.)  Ruffed Grouse seldom feed on a poplar tree that is less than 30 years old. Perhaps these older trees have more vigorous buds, or perhaps their branches are easier to perch on because they are larger. (Information source:  Ruffed Grouse: Woodland Drummer by Michael Furtman)

Naturally Curious is supported by donations. If you choose to contribute, you may go to http://www.naturallycuriouswithmaryholland.wordpress.com    and click on the yellow “donate” button.