Northern Water Snakes (Nerodia sipedon) are non-poisonous snakes which, as their name implies, tend to be found in the Northeast, in and around water. Females (bottom snake in photo) are heavier and longer than males (as long as five feet) and grow much faster. Since the end of May, Northern Water Snakes have been engaging in courtship rituals and mating. The male snake (top snake in photo) begins by crawling alongside a female while he rubs his body along hers. It is not unusual for more than one male to court her at the same time, with one eventually achieving copulation by twisting and coiling his tail around her body and tail as he attempts to get their cloacae aligned.

Northern Water Snakes are ovoviviparous – the female’s eggs incubate inside her body. The larger the female, the greater the number of live young she’s likely to produce in late August or September. Northern Water Snakes have between 12 and 60 young — judging from the size of the pictured female she’ll have a large litter. (Photo by Jeff Mazur)

Somewhere between two and four feet (depending on where you live in New England) beneath our feet there is a “frost line” below which the ground water in soil doesn’t freeze. Snakes, being reptiles, are ectotherms, and their bodies assume the temperature of the air around them. In order to avoid being frozen to death in the winter, they retreat below the frost line, where they enter a state called brumation – the cold-blooded term for a state of torpor and inactivity that is not true hibernation, but in which a dramatic slowing down of bodily functions occurs. Crevices in south-facing rocky ledges and abandoned woodchuck, fox and skunk dens (and human cellars) often serve as hibernacula, or winter shelters. Common Gartersnakes are known to gather in large numbers (one Canadian den served as a hibernaculum for 8,000 gartersnakes), in order to concentrate the small amount of heat their bodies produce in the winter.

As the air temperature lowers in the fall, a snake’s body temperature falls and its metabolism decreases dramatically. Gartersnakes actively prepare for this by not eating for several weeks prior to hibernating. This allows all of the food they previously consumed to be completely broken down and absorbed into their system. To enhance this process, gartersnakes bask in the sun both before and during their early days of sheltering in hibernacula, warming themselves so as to increase the rate of their metabolism just prior to hibernating.

Should a snake happen to eat a large grasshopper, earthworm or small frog just prior to entering brumation, the snake may become extremely lethargic due to the slowing down of its metabolism, and the contents of its stomach may not be digested as quickly. The longer it takes to process food in its stomach, the greater the chances that this dead material will start to decay, which could result in serious illness to the snake. 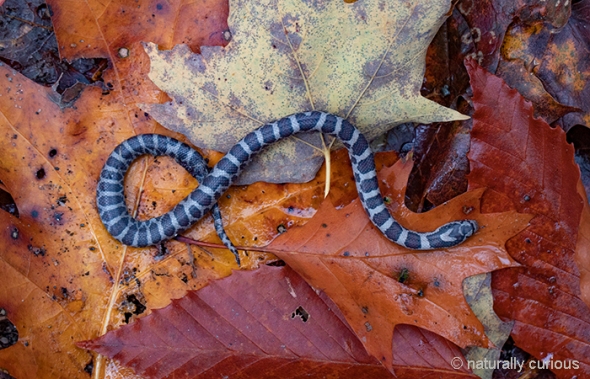 The eggs that Milk Snakes laid last June or July hatched recently and the six-inch young snakes as well as the adults that produced them will only be evident (and then, mostly at night) for the next few weeks.  Hibernation is around the corner, and these snakes often seek out the cellars of old houses with stone foundations in which to spend the winter.  Should you come upon a Milk Snake, please spare its life. They are not poisonous, and you couldn’t ask for a more efficient mouse catcher (Mice accounted for 74 percent of a study of Milk Snakes’ stomach contents.). 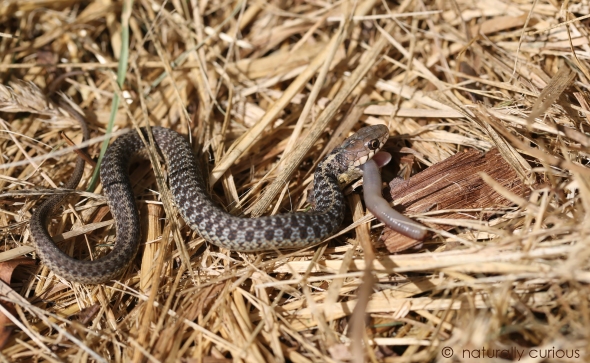 Seventy percent of the world’s snakes lay eggs (oviparous). The rest give birth to live young (viviparous). Oviparous snakes tend to live in warmer climates, where the substrate they lay their eggs in is warm enough to incubate the eggs.  (Most egg-laying snakes deposit their eggs and then depart, relying on the substrate to incubate the eggs.)  Viviparous snakes tend to live in cooler regions, where the ground is too cold to provide incubation.

There is a distinction between egg-laying snakes.  The majority of snakes that lay eggs do so outside their body, in a protected area such as a rotting log.  These snakes are known as oviparous. There are also egg-laying snakes that retain their eggs inside their bodies until they’re ready to hatch. These snakes are called ovoviviparous. Ovoviviparous snakes, such as the Common Gartersnake, appear to give birth to live young, but they actually don’t. Unlike viviparous species, there is no placental connection, or transfer of fluids, between mothers and babies, because the developing young snakes feed on the substances contained in their individual eggs. The snakes emerge from the mother when they hatch from their eggs, giving them the appearance of “live” births. The gestation period for oviparous snakes is generally longer than those of ovoviviparous snakes and vary from a few weeks to a few months in length. (Photo: very young Common Gartersnake, Thamnophis sirtalis sirtalis, consuming an earthworm)

American crows obtain most of their food on the ground as they walk along in search of seeds, insects, frogs, snakes, bird nests and small mammals. Their hunting techniques are varied and most involve the use of their bill. In search of invertebrates, crows will probe the soil with their bill, flick aside leaves, dig in the soil and even lift cow paddies. They fish for tadpoles and dig nearly an inch deep with their bill for clams. In winter, their foraging continues and as these tracks indicate, when the snow is only a few inches deep they will walk around and around in a given area, probing tufts of grass for hibernating insects, mice, voles, or any other form of life these opportunists find.

Some snakes lay eggs, while others give birth to live young. Milksnakes (which are nonpoisonous) belong to the former group and sometime between April and late June female milksnakes lay 3 to 20 eggs in rotting logs or moist, warm, leaf litter — locations that offer protection from predators and cold weather. Eggs laid in June are now hatching – seven- to ten-inch milksnakes are each using their egg tooth to slice through their egg and enter the world. Newly-hatched milksnakes have especially vibrant colors, including oranges, reds, purples, and yellows, which become duller as they age. Milksnakes are most active during the day but are rarely seen due to their secretive nature. (photo: adult milksnake; insert-newly hatched milksnake)

Common Gartersnakes begin mating in the spring as soon as they emerge from brumation (a reptilian state of dormancy similar to hibernation in mammals, but involving different metabolic processes). The males leave the den first and wait for the females to exit. Once the females leave the den the males surround them, forming what is called a mating ball (one female and many males). The males give off pheromones that attract the female. After the female has chosen her mate and mated, she leaves. while the males stay to re-mate with other available females. The females have the ability to store the male’s sperm until it is needed and thus a female may not mate if she does not find a proper partner.